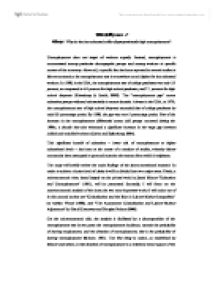 Why do the less educated suffer disproportionally high unemployment?

Unemployment Essay: Why do the less educated suffer disproportionally high unemployment? Unemployment does not target all workers equally. Instead, unemployment is concentrated among particular demographic groups and among workers in specific sectors of the economy. Above all, a specific fact has been reported in several studies in labour economics: the unemployment rate is everywhere much higher for less educated workers. In 1998, in the USA, the unemployment rate of college graduates was only 1.8 percent, as compared to 4.0 percent for high school graduates, and 7.1 percent for high school dropouts (Ehrenberg & Smith, 2008). The "unemployment gap" across education groups widened substantially in recent decades. Always in the USA, in 1970, the unemployment rate of high school dropouts exceeded that of college graduates by only 3.3 percentage points. By 1998, the gap was over 5 percentage points. Part of the increase in the unemployment differential across skill groups occurred during the 1980s, a decade that also witnessed a significant increase in the wage gap between skilled and unskilled workers (Cahuc and Zylberberg, 2004). This significant benefit of education - lower risk of unemployment at higher educational levels - has been at the centre of a number of studies, whereby labour economists have attempted to spot and examine the reasons from which it originates. ...read more.

This brief microeconomic analysis of the relation between education and unemployment does not certainly contain every aspect related to it. The problem is that, despite the immense literature available on the wage structure by education, much less research is devoted to mobility and unemployment aspects of education. Let us now move on to the macroeconomic view of the issue. The deteriorating position of low skilled relative to high skill labour, measured either in terms of a decline in the wages of the least qualified section relative to the most skilled, or in terms of the relative likelihood of their being in work, has recently stimulated a strong interest in globalization and labour markets. The attention has been mainly drawn to the roles of trade, in particular with low-wage economies, as a proxy of globalization, and technology, in particular skill-biased technical change. An important factor-content analysis, emerging from the labour theorists' traditional approach, deserves particular attention. A convenient approach, based on a partial equilibrium framework, involves assuming a downward-sloping demand for labour and a vertical supply curve. The labour content of trade can be added to domestic supply, thus shifting the supply curve and permitting identification of the effect of trade on the wage (Greenway and Nelson, 2000). ...read more.

explain the acceleration of demand growth; and the price studies and cross-sectoral studies of skill intensity, productivity and employment, though they do not actively support the globalisation hypothesis, are not inconsistent with it, either. There is plenty of evidence that skill-biased technical change has raised the relative demand for skilled workers, but much less evidence of an autonomous acceleration in its pace over the past two decades." In my personal opinion, all the aforementioned studies present valid and logical explanations to the evidence that in almost all developed countries, since about 1980, the gaps between skilled and unskilled workers in wages and/or unemployment rates have widened. Moreover, there is also a moderate consensus on the main general reasons for that. As far as the debate globalization - skill-biased technical change is concerned, I believe that further research is fundamental to shed light on it. The first obstacle to draw a definite conclusion is that the evidence available so far is almost exclusively for the USA and the other developed countries (Greenway and Nelson, 2000). Secondly, as indirectly noticed by Wood (1998), it must be considered that trade and technology interact; more research based on this assumption is required. Finally, and I believe most importantly, trade is just one dimension of globalization, and the impact of factor movements on labour market outcomes is not yet well understood. ...read more.