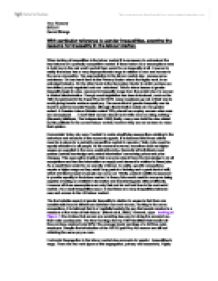 With particular reference to gender inequalities, examine the reasons for inequality in the labour market.

With particular reference to gender inequalities, examine the reasons for inequality in the labour market. When looking at inequalities in the labour market it is necessary to understand the key features of a perfectly competitive market. If these features or assumptions were to hold true in the real world market there would be no inequality at all. However in reality the labour has a very disproportionate wage in relation to men and women in the same occupation. The segmentation in the labour market also causes some unbalance. On one hand there is the Primary Sector where the highly work, in an unionised industry. On the other hand is the Secondary Sector in which workers are low skilled, poorly regulated and non-unionised. This is where issues of gender inequality begin to arise, reasons for inequality range from the social role of a woman to blatant discrimination. Though much legislation has been introduced, such as the 1984 Amendment to the Equal Pay Act 1975, many employers go out of their way to avoid giving female workers equal pay. The same kind of gender inequality can be found in post Communist Russia, although discrimination exists at a far greater extent. ...read more.

The opposing argument to this points out that women are constrained by social and economic factors, which force them to take on part time employment. For instance, state childcare is very limited presently and many mothers may be unable to afford expensive care bills. As a result part time work is their only alternative and it would seem that 'domestic responsibilities are shaping the choices in the labour market.' (Marsh et al 2000) Women are therefore receiving the jobs that are least attractive because they have to fulfil the role of a domestic mother, caring for the children while the farther brings in the main income. A second possible reason to explain gender inequalities is that when women are in full time employment, it is usually in the Secondary sector. This type of labour provides low wages, as work is unskilled and casual. The theory behind this type of gender inequality is that there is a 'skills gap' between men and women. As mentioned earlier, it is also commonly assumed that women usually undertake unpaid domestic work. Therefore the alternative is to work in a relatively easy job that has easy entry and exit. ...read more.

Employers can take advantage of them, as the work is very casual and poorly regulated. It is also apparent that women are slow to be promoted and as a result are heavily under represented in top jobs. Discrimination accounts for this type of inequality, women have many barriers to overcome before they will be fully accepted in the current labour market. Old boys' networks, sexism and the 'glass ceiling' are just a few of the problems that women are facing. Some measures have been taken by the Government have been taken although it has been the request of the European Union. Take for example the Equal Pay Act, which has done little to close the pay gap in male and female wages. The introduction of 'Opportunity 2000' scheme under the Conservative Government in 1991 encouraged companies to set ten year targets to improve the treatment of women in the business. However this scheme was voluntary and has done little to improve the situation. It seems that employers tend to regard women as a risk, believing that they are more likely to show more loyalty towards their husbands than dedicate themselves to their work. As long as this feeling remains, women will remain unequal in a male dominated labour market. Tara Flannery SPO551 Gerard Strange ...read more.