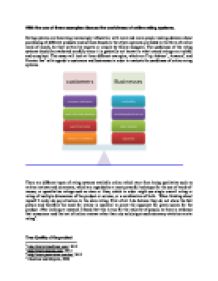 With the use of three examples discuss the usefulness of online rating systems. Rating systems are becoming increasingly influential, with more and more people making decision about purchasing of different products and services based on the others opinio

With the use of three examples discuss the usefulness of online rating systems. Rating systems are becoming increasingly influential, with more and more people making decision about purchasing of different products and services based on the others opinions provided in the form of online word of mouth, be they written by experts or simply by fellow shoppers. The usefulness of the rating systems should be evaluated carefully since it is generally not known to what extend ratings are truthful and compliant. This essay will look at three different examples, which are Trip Advisor1, Amazon2, and Premier Inn3 with regards to customers and businesses in order to evaluate the usefulness of online raring systems. There are different types of rating systems available online which vary from being qualitative such as written reviews and comments, which are regarded as a most powerful technique for the use of word-of-mouse, or quantitative ratings such as stars or likes, which in order might use single overall rating or rating of multiple dimensions of the product or service, or a combination of both. When thinking about myself I rarely do pay attention to the stars rating. First of all I do believe they do not show the full picture and therefore the need for review is essential to prove the argument for given scores for the product. After looking at research I found that this is true for the majority of people, as there is evidence that consumers read the text of online reviews rather than rely solely upon such summary statistics as star rating4. ...read more.

Although there are a number of bad practises shown in news, people still find reviews on amazon quite influential and useful, providing the top amazon reviewers are trusted by many customers22. Trip Advisor according to Advertising Standards Authority can no longer claim all its reviews are "honest", "real" or "trusted"23. The company like amazon was represented in the news in a negative way, which should undermine the site's reputation. On the other hand the site is very successful and attract lots of customers. Moreover, most of the people who read online reviews do understand the presence of information bias. With the number of users increasing as well the number of partnerships which are based on representation of featured information from Trip Advisor on others websites, shows that the use of reviews is useful and helpful tool not only for customers to decide where to go and how to plan their holidays but also for businesses to increase their popularity and revenues as well as to improve their businesses24. For example, by signing to the Trip Advisor management centre the company gives opportunity to increase business popularity rating on the website by getting more reviews. There are number of filtering measures undertaken by Trip Advisor, and if the businesses do not agree with the review they can ask for investigation. Moreover, businesses have an option to write their side of the story, which proves to be helpful for many travellers, since seeing the manager's response to the bad review makes them more comfortable with making decisions.25 Ingrid Jeacle ...read more.