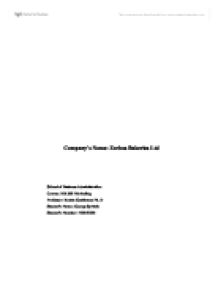 Company's Name: Zorbas Bakeries Ltd School of Business Administration Course: MK 509 Marketing Professor: Kostas Gouliamos Ph. D Student's Name: George Syrimis Student's Number: F20041200 Company's History: Zorba's Bakeries and Sons Ltd. was created at the village of Athiainou, Cyprus, at the 1st o October 1975 by Mr. Andreas Zorbas. It became a listed Company at the 22nd of November of 1979. The main activity of the Company was the production and delivery of baking products. At the October of 1988, the customer demands "forced" the owner of the Company to take the decision, for opening his first store at Nicosia. At the year of 2000, the Company was running seven (7) shops at the wider area of Nicosia and at the same year it became public. At the 27th of December of 2000 the Company became member of the Cyprus Stock Exchange (C.S.E.). The whole production is made at the two factories of the Company at Larnaka Industrial Area. The old one is running since 1999 and the new one since 2002. The new premises (an investment of about 6 million pounds) is employing the latest technologies and it is one of the most advance at Europe. The Company is satisfying all the International Quality Standards like ISO 9000 and HACCP (Hazard Analysis of Critical Control Points) for both Production facilities. Nowadays, the Company is running 31 shops all over Cyprus: 13 Nicosia District 6 Larnaka District 6 Limassol District 3 Paphos District 3 Famaggusta District During the last three (3) years the Company has been expanded at the "Take Away Food" market, the "pizza" market as also at the "Catering" one. External and Internal Environment: During the year 2000, Company's Management team was trying to create the future strategy plan of the Company. The International Food Engineering Consultants of Denmark, (a well established Consulting Group), was asked to give their thoughts and opinions about this. ...read more.

The Human Resources Department is responsible for the continuous training of all the selling personnel. All the personnel have to pass this, from the young girl behind the point of sale machine to the sales manager of the Company. For this reason, a training centre has been created since 2002. The suppliers are as important as the customers. With the relation channels established with them the quality assurance program is achieved at its highest possible level. Each supplier must be able to deliver to the purchasing department of the Company raw materials and products of no defectiveness and of the quality that the Purchasing Department asked for. It is made clear to them, that any delays are unforgiving. Mr. Artemis Hatsitoffis, purchasing manager [4] explains that we help our suppliers to serve us correctly. We make them realize that is for their own good when we ask for them to become HACCP1 approved. The Research and Development Department helps the suppliers to become better and better even with know-how and technology. By this, both parties are served because the supplier becomes bigger and more reliable and because the correct supply of raw materials is established. As a result the company's quality assurance department is making only some minor test to the various supplies because the necessary quality is quarantined. At the other hand, Company is demanding from its various suppliers to help the Research and Development Department for the improvement of the existing products, developing of new ones, improving of the various production processes as also for the increase of productivity and reduction of the production and operational cost of the Company. All this continuous improvements are necessary not only at the production but also at the logistics, sales, maintenance and even accounting department. At all contracts that are signed between Zorbas bakeries and the various equipment manufactures, a supplier's obligation regarding the upgrading of the sold equipment is included. ...read more.