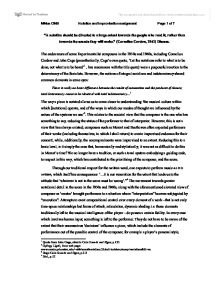 &quot;A notation should be directed to a large extent towards the people who read it, rather than towards the sounds they will make.&quot; (Cornelius Cardew, 1961) Discuss.

"A notation should be directed to a large extent towards the people who read it, rather than towards the sounds they will make." (Cornelius Cardew, 1961) Discuss. The endeavours of some Experimentalist composers in the 1950s and 1960s, including Cornelius Cardew and John Cage (parenthetically, Cage's own quote, 'Let the notations refer to what is to be done, not what is to be heard'1 , has resonances with the title quote) were a purposeful reaction to the determinacy of the Serialists. However, the notions of integral serialism and indeterminacy shared common elements in some eyes: There is really no basic difference between the results of automatism and the products of chance; total determinacy comes to be identical with total indeterminacy....2 The way a piece is notated allows us to come closer to understanding 'the musical culture within which [notations] operate, and of the ways in which our modes of thought are influenced by the nature of the systems we use'3. This relates to the societal view that the composer is the one who has something to say, reducing the status of the performer to that of interpreter. However, this is not a view that has always existed; composers such as Mozart and Beethoven often expected performers of their works (including themselves, to which I shall return) ...read more.

Transcribing one's ideas in such a manner as to enable the performer to comprehend your directives, and even involve the player in decision-making, is a performance-perspective oriented view, having the added benefit of lending greater objectivity to the compositional task. '...A paradigm that grew up in the early twentieth century...saw the composer as some kind of absolute genius capable of imagining a perfect performance of a piece'9 The 'tendency towards greater explicitness'10, which this comment infers, is part of a paradigm of composition far removed from the way composition was historically defined. Yet, the morphology of every new notation, and the consequential absence of a 'norm of common notational practice', meant that immediate recognition of a composer's intentions became impracticable.11 One underlying issue to be addressed in greater depth is that of the relationship between composer and performer. Hugo Cole states that 'notation evolved to meet felt but inarticulate needs'12 When new methods of notation are devised in response to the need to articulate a newly developed style of composition, composers move the hypothetical goalposts further away again from the performer, as they have to once again learn the new language, interpret again the new signs and work out what the piece (or the composer) ...read more.

we have seen, 'simple' notation does not necessarily equal many possible interpretations, and on the same line, an elaborate notation such as Cardew's can permit varied interpretation. The psychological impact of how the music looks on the page invites varied readings; the printed page is a storage medium where an inevitably incomplete representation of 'notateable' ideas can be retained for the future. The fact that this aspect of the work does not change over time, like a painting or a book, does not mean that the piece will not change and evolve. Art's ability to carry societal properties, to evolve and reflect changing times is surely part of its value. The search for greater notational control led to greater complexity, yet the early influence of the possibilities of electronic music must have contributed to this pursuit. Peter Zinofieff spoke of an early ideal, satisfied by electronic composition, where 'we can each have our own private language specially tailored for our own machines and individual needs or frustrations' 21 Ultimately, though, the performer's job is 'to make the relationships and patterns in the music clear to the listener's mind and ear'22. This hope, though, displaces the enduring problems which lie between composers and those who are employed to realise the work, be they human or otherwise. ...read more.