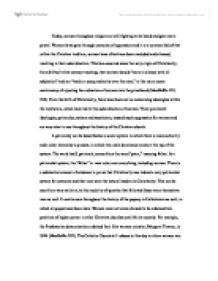 Today, women throughout religion are still fighting to be heard and gain more power. Women have gone through centuries of oppression and it is a common belief that within the Christian tradition, women have oftentimes been excluded and silenced, resulting in their subordination. This has occurred since the very origin of Christianity, from St.Paul's first-century teaching, that women should "learn in silence with all subjection" and not "teach or usurp authority over the man," to the more recent controversy of rejecting the ordination of women into the priesthood (MacHaffie 153, 216). From the birth of Christianity, there have been not so welcoming ideologies within the institution, which have led to this subordination of women. Three prominent ideologies, patriarchy, sexism and asceticism, caused much oppression for women and are very clear to see throughout the history of the Christian church. A patriarchy can be described as a social system in which there is male authority and a clear hierarchy is present, in which this male dominance exists at the top of the system. The word itself, patriarch, comes from the word "pater," meaning father. In a patriarchal system, the "father" or man rules over everything, including women. There is a substantial amount of evidence to prove that Christianity was indeed a very patriarchal system for centuries and that men were the natural leaders in Christianity. ...read more.

This particular ideology deals more with discrimination and stereotyping more than anything else. The main stereotype given to women was that of the "homemaker." The common belief throughout history was that women's most important roles were mainly in the home. Their primary roles were as wives and mothers, or typically the "homemakers," dealing with more domestic matters throughout history. Many questioned, who would "manage the household if there was no woman at home?" (MacHaffie 45). Certainly men were made stronger, and they were not meant to run the home, but deal more with outside matters, which included the church. If a woman lost her husband and became a widow, she was entitled to the support of the church, but only if they were "sober, chaste, pious and the wives of only one husband" (MacHaffie 19). These widows were not to "discuss doctrine lest they misconstrue it" and certainly could not try to teach others about the church, for the church did not allow women to teach. This would have been against the rules that women obey the authority of men. It would have been "contrary to the example set by Jesus and the biblical injunction that women be subject to men" (MacHaffie 19). ...read more.

The other two ideologies, patriarchy and sexism, were certainly contested more throughout history, through many people taking action, speaking out and also writing about all the oppression that was suffered because of them. The recent feminist movement is probably the most prominent movement that has helped women in their stance against sexism and patriarchy in religion, especially Christianity. Women have come a long way in gaining a voice and more authority because of the powerful movement. Today, more and more women are being ordained ministers in several Christian denominations, making Christianity less of a patriarchal institution. Also, more Christian women are stepping up to the front lines and are teaching theology, profoundly helping to eliminate the presence of sexism within Christian education. There are multitudes of writers out there who continue to try and make more Christian women aware of the feminist movement and encourage them to fight for equality with men within their faith. One magazine, The American Baptist Woman, for example, has published articles that urge women to take an honest look at their role in church and society (MacHaffie 207). The fact that writings such as that exist out there in today's world along with so many people willing to strive for women's equality, truly strengthens hope for women that sexism and patriarchy can once and for all be eliminated if all women desire it enough and work together to achieve that goal. 1 2 ...read more.