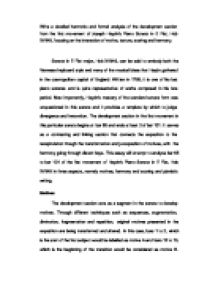 Write a detailed harmonic and formal analysis of the development section from the first movement of Joseph Haydn's Piano Sonata in E Flat, Hob XVI/49, focusing on the interaction of motive, texture, scoring and harmony. Sonata in E Flat major, Hob XVI/49, can be said to embody both the Viennese keyboard style and many of the musical ideas that Haydn gathered in the cosmopolitan capital of England. Written in 1789, it is one of his last piano sonatas and is quite representative of works composed in his late period. Most importantly, Haydn's mastery of the standard sonata form was unquestioned in this sonata and it provides a template by which to judge divergence and innovation. The development section in the first movement in this particular sonata begins at bar 65 and ends at beat 3 of bar 131. It serves as a contrasting and linking section that connects the exposition to the recapitulation though the transformation and juxtaposition of motives, with the harmony going through distant keys. This essay will attempt to analyse bar 65 to bar 131 of the first movement of Haydn's Piano Sonata in E Flat, Hob XVI/49 in three aspects, namely motives, harmony and scoring and pianistic writing. Motives The development section acts as a segment in the sonata to develop motives. Through different techniques such as sequences, augmentation, diminution, fragmentation and repetition, original motives presented in the exposition are being transformed and altered. ...read more.

is juxtaposed with the detached, rhythmically driven motive E in the L.H. These two superimposed motives create contrast and unfamiliarity and thus heighten the anticipation to allow a flowing entry of the recapitulation. He constantly highlights the use of motive by attaching various functions to this motive. For example, although the harmony goes through several tonicisations and modulations, the 4-note rhythmic motive still remains present. Because of the above examples, we can see that Haydn is indeed a master at transforming motives through compositional techniques such as repetition, sequences and fragmentation. His ability to reuse thematic material and create interest and variety for those reappearances of them is unrivalled. Harmony The development uses secondary dominants extensively with some chromatic harmony to allow the tonality to go to different keys. Continuing from the home key of the sonata which is Bb major at the end of the exposition, the development begins with a Bb major tonality, the dominant relation to the tonic Eb. The three voice contrapuntal texture begins at bar 66, resulting in tonicisation to various related keys through the use of suspensions and sequences. After going through the cycle of fifths, the tonal centre stabilises at C. From bar 80, Haydn manages to increase the harmonic rhythm to once every bar as compared to the exposition's slower harmonic rhythm typically found in Classical period pieces. ...read more.

One would expect the resolution or rather the tonic to be in the same register as the cadential chord. However, Haydn shifts the resolution two octaves down the keyboard to amplify the contrast between the cadential chord and the resolution. Also, the variations in register, which is a characteristic of pianistic writing, create points of interests for the listener. As the fortepiano is not able to sustain notes for a long duration, the motives and themes may seem boring and uninteresting after a while. Shifts in register can compensate by constantly attracting the listeners' attention to details and hence keep their interest in the music. For example in bars 95, the shift from the lower F to the higher F in the R.H. grabs the listeners' attention and keeps them listening. Another part of the development which demonstrates Haydn's pianistic writing would be the cadenza at bar 131, which is used to showcase the pianist's virtuosic capabilities. The scalic and chromatic passage is intended for the performer to showcase his virtuosic skills. These elements of pianistic writing are present in the development section of this movement. In conclusion, various techniques such as such as repetition, sequences and fragmentation are being employed to develop motives while the harmony delineate the motives and creates the anticipation for sudden changes in the register or timbre. The pianistic writing and scoring of this development section further attracts the listeners' attention and causes listeners to anticipate the return of the recapitulation. Word count: 1807 ...read more.