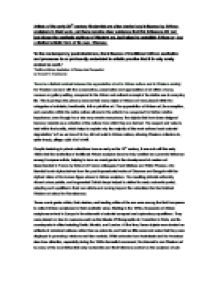 Artists of the early 20th century Modernist era often denied any influence by African sculpture in their work, yet there remains clear evidence that this influence did not just shape the aesthetic stylings of Western art, but helped to establish African a

Artists of the early 20th century Modernist era often denied any influence by African sculpture in their work, yet there remains clear evidence that this influence did not just shape the aesthetic stylings of Western art, but helped to establish African art as a distinct artistic form of its own. Discuss 'In the contemporary postcolonial era, the influence of traditional African aesthetics and processes is so profoundly embedded in artistic practice that it is only rarely evoked as such.' 'Traditional African Aesthetics: A Philosophical Perspective' by Innocent C. Onyewuenyi. There is a distinct contrast between the appreciation of art in African culture and in Western society; the Western concern with the conservation, preservation and appreciation of art within a home, museum or gallery setting, compared to the African sub-cultural concept of its relative use in everyday life. This is perhaps the primary reasons that many object of African art were placed within the categories of artefacts, handicrafts, folk or primitive art. The appreciation of African art, its conception, and execution within the native culture allows for the artist to be recognized for his/her relative importance; even though he or she may remain anonymous, the objects that have been designed become valuable as a reflection of the culture from which they are derived. The respect and value is held within the locality, which helps to explain why the majority of this work suffered such colonial degradation; 'art' as we know it to be, did not exist in African culture, allowing Western collectors to, quite simply, pillage objet d'art' at will. Despite featuring in private collections from as early as the 15th century, it was not until the early 1900s that the aesthetics of traditional African ...read more.

interest in the symbolic or active functions of any of these artefacts, it is the facial form in this case that can be noted as an influence to a number of key modernist works - most noticeable in a number of Matisse and Picasso's works. Matisse, a seasoned museum browser, had likely encountered African sculptures at the Trocad�ro museum with fellow Fauve painter Maurice de Vlaminck, before embarking on a spring 1906 trip to North Africa. Upon his return, Matisse painted two version of The Young Sailor (pictured right). In the second version of the painting (below), a more rigidly abstract visage was used, reminiscent of a mask, compared to the first versions naturalistic contoured facial features. Much like the Ambete piece - here the face is flattened, and more noticeably, there is a major contrast between the still quality of the sailor's face, and the wild, frenetic brushstrokes of his clothing. Whereas the eyebrows, nose and lips are all painted with concrete, heavy lines, his pants and sweater are composed of wild painted curves and turns; a move, in short, from the figurative humanist to the abstract and strategic. At about the same time, Picasso completed his portrait of American expatriate write Gertrude Stein, finalizing her face after ninety repaintings in the frozen, masklike style of archaic sculptural busts from his native Iberia. In the Autobiography of Alice B. Toklas (1913), Stein wrote an account of Matisse's fall 1906 purchase of a small African sculpture, now identified as a Vili figure from the Democratic Republic of Congo, at a curio shop on his way to visit her home. ...read more.

There, in 1947-8, the figures were cleaned and examined more closely. It was established firstly that these figures were not bronze, but made from leaded zinc brass, and also further theorized that the crowned figures were realistic or idealistic portraits of sacred rulers of Ife, dating back to 12th-15th century. The fascination sparked by the Ife heads was due to both their proposed age and their conventional appearance by European standards. They represented an artistic tradition of naturalistic bronze casts, compared to the abstract and the wooden sculptures known to the Western public. Made with a great deal of skill, the heads strongly reminded the European public of their own art history, and thus it was not believed that they had been created by African artists. In no circumstance could faces of such extraordinary detail, and constructed in hollow casted brass, have been made by such technically underdeveloped craftsmen. The real-idealistic quality of the face, on par with Greco-Roman renaissance sculpture lead to the widespread belief that what had actually been found was the lost kingdom of Atlantis. It was only after a series of technical and stylistic studies that experts finally came to believe that seventeen small heads were part of an African artistic tradition spanning centuries. To conclude, however much it was denied by the creative industry, the aesthetic values of African sculpture had an enormous influence on all forms of art in the modern era, stemming from the Modernist periods of early 20th century France, and expanding through the works of Picasso, Matisse, Modigliani and Epstein (to name but a few) to establish itself as one of the most key artistic forms in the entirety of world history. ...read more.