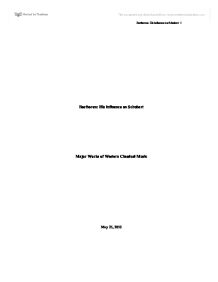 Beethoven and his influence on Schubert

Beethoven: His influence on Schubert Major Works of Western Classical Music May 21, 2010 The works of Ludwig van Beethoven have profoundly impressed countless musicians from his own time to the present. Discuss Beethoven's influence on one later composer of your choice, making reference to specific works of Beethoven himself and of the selected composer. Explore the nature of this influence, and whether or not it was explicitly expressed by the composer. Be clear about the genre of your examples. If they are vocal, explore their text (s); if instrumental, explain whether they are programmatic or abstract in nature. Beethoven was one of the most important figures in western classical music composition who had influenced a number of his successors including many great composers. He had put forth roots in the Mozart and Haydn traditions of classical period but went way beyond that. His lifetime covered both the end of the classical period and the beginning of the romantic period. Not just the techniques and his unique style, but also his revolutionary ideas, his passion to liberty of individuals and the ideas of French Revolution generating an integrity with the radical humanistic ideals of his contemporary society were making him distinct from any other composer. ...read more.

Schubert did indeed reach a level of success that emulated Beethoven's career. He received wide acceptance among critics and patrons (including those of Beethoven), and was quite popular among the general public. (The influence of Ludwig van Beethoven, n.d.) There are two obvious examples of the influence of Beethoven on Schubert's instrumental programmatic pieces which are his last major compositions; namely in the opening of the Sonata in C minor and the final of the sonata in A major. The opening of the Last Sonata in C minor was quite similar in structure with Beethoven's theme 32 Variations in C minor; in fact, Beethoven's work was almost imitated by note for note (Cone, 1970). Beethoven's Piano Sonata Op. 31, No. 1 has a structure that can be closely matched with the structure of the final part of the Last sonata (Einstein, 1951). Alfred Einstein had also commented on the resemblance of Schubert's finale and Beethoven's finale and said "an echo of Beethoven's" as cited in Fisk (2001). The number of the works of Schubert and Beethoven that are similar to each other can be increased, but the more it is increased the less commonality there is between the compared pieces. ...read more.

Schubert's compositions also had a cyclic form which creates a unity within the piece. Fisk (2001) described Schubert's last sonatas with these words "a unifying tonal design, which follows a similar, basic dramatic scheme in each of the three works". The construction of a contrast tonality was achieved through using the home key of the sonata in both the beginning and the ending of the first movement. To sum up, Ludwig van Beethoven as a quite important genius of western classical music, had been influenced many other crucial figures not only in music history; but also a lot of other branches of art. Many sources recognize Ludwig van Beethoven as a composer of the late Classical Period and the early Romantic Period. Therefore, he had a great influence specifically on the Romantic Period's composers which could be seen as the successors of Beethoven. The significant examples would be Robert Schumann, Clara Schumann, Franz Liszt, Johann Strauss and most importantly Franz Schubert. Franz Schubert was neglecting the influence that Beethoven had on him; in fact he was quite reactive against having commonalities with Beethoven. But later on, he did admit the importance of Beethoven's impact on his own composition due to the fact that Beethoven's popularity was rising. Schubert's last major sonatas were specifically having resemblance to Beethoven's compositions. These pieces are all instrumental. ...read more.