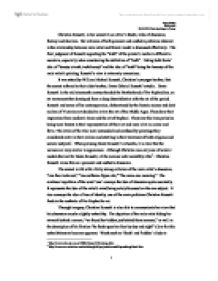 Christina Rossetti, in her sonnet In an Artist's Studio, talks of obsession, fantasy and idealism.

Christina Rossetti, in her sonnet In an Artist's Studio, talks of obsession, fantasy and idealism. Her criticism of both personal and aesthetic problems inherent in the relationship between male artist and female model is discussed effectively. The final judgment of Rossetti regarding the "truth" of the painter's works is difficult to ascertain, especially when considering the definition of "truth". Taking both Keats' idea of "beauty is truth, truth beauty" and the idea of "truth" being the honesty of the male artist's painting, Rossetti's view is extremely censorious. It was stated by William Michael Rossetti, Christina's younger brother, that the sonnet referred to their older brother, Dante Gabriel Rossetti's studio. Dante Rossetti in the mid nineteenth century headed the Brotherhood of Pre-Raphaelites, an art movement that developed from a deep dissatisfaction with the art of the period. Rossetti and seven of his contemporaries, disheartened by the historic scenes and drab realism of Victorian art decided to revive the art of the Middle Ages. They drew their inspiration from medieval times and the art of Raphael. They saw this time period as being more honest in their representation of their art and more alive in colour and form. The critics of the time were astounded and confused by paintings they considered na�ve in their realism and startling in their treatment of both religious and secular subjects1. ...read more.

Rossetti continues by stating that "every canvas means/ The same one meaning, neither more nor less". This reduction of personality in to similar looking, similarly posed women is what Rossetti views as a problem. She saw that the romance and attention that surrounded the models of the artists placed them in a level higher than ordinary mortals3. They were glorified and transported to a mythical realm of tragic heroines and fatal sirens, where they were archetypes and dreams, "a queen in opal" and "a saint, an angel". Rossetti believed that this intentional exaltation of their models paradoxically diminished them. That by raising them higher than everyday women, they reduced their reality, their complexity and any sense of activity. Rossetti describes the painted women as "fair as the moon and joyful as the light," as "not wan with wanting, not with sorrow," "not as she is". Jan Marsh states in The Pre-Raphaelite Sisterhood that "in art and life, some of the Pre-Raphaelite women felt the pressure to abandon humanity and become an archetype." She also describes the women as "dreams coming to life in paints". This dream in paint is what the male artist's fell in love with and became obsessed by. It was an idealistic form of woman that Christina Rossetti believes to be the aesthetic problem of the male artists. ...read more.

It also allows us to understand Christina Rossetti's view that there is not "truth" in the beauty of the paintings and that such beauty can be detrimental to ones mortal life, as shown by the male artist's unhealthy obsession. The beauty of the paintings is clear, Christina Rossetti notes it throughout the sonnet with word choice, "shone bright," "opal or ruby," "freshest summer-greens", "joyful," but there is no indication of her finding an ultimate "truth". It is indeed true that Christian Rossetti's In an Artist's Studio concerns itself with the relationship between the male artist and the female model. Throughout the sonnet Rossetti condemns and criticises the Pre-Raphaelite notions of beauty, vehemently denouncing the loss of individuality and reduction of human nature. She finds several problems, both personal and aesthetic in the relationship between artist and model. The main theme of the sonnet is obsession, and this is effectively conveyed with imagery and word choice. It is also Rossetti's main argument for personal trouble. She continues to discuss the aesthetic problems of the art by criticising the incredibly pressured situation such exaltation placed on women. Rossetti does not find any specific "truth" in the painter's artwork other than the fact that it isn't "truthful". There is no truth in portraying models in similar fashion or becoming fixated on a painted dream. ...read more.