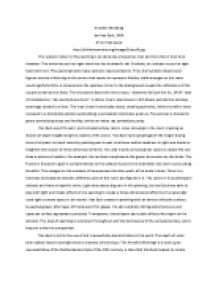 Commentary on the Arnolfini Wedding by Jan Van Eyck, 1434

﻿Arnolfini Wedding Jan Van Eyck, 1434 Oil on Oak panel http://biblelessonsite.org/images2/eyck5.jpg The subject matter in this painting is an obviously prosperous man and his bride in their bed chamber. The bride has put her right hand into her husband?s left. Similarly, he is about to put his right hand into hers. This painting holds many symbolic representations. First, the Symbolic objects and figures include a little dog in the centre that seems to represent fidelity, while oranges on the chest could signify fertility. A close look at the spotless mirror in the background reveals the reflections of the couple as well as the artist. The inscription above the mirror says, "Johannes de Eyck fuit hic, 1434," that is translated as, "Jan van Eyck was here?. A cherry tree is also shown in full bloom outside the window, seemingly symbolic of love. The man's hand is vertically raised, showing authority, while the wife's hand is placed in a horizontal position symbolizing a somewhat submissive posture. The woman is dressed in green symbolizing hope and fertility, while her white cap symbolizes purity. Van Eyck used Oil paint, and complementary colors. Lines converge in the room creating an illusion of depth heightening the realism of the scene. Van Eyck took advantage of the longer drying time of oil paint to blend colors by painting wet-in-wet to achieve subtle variations in light and shade to heighten the illusion of three-dimensional forms. He used mostly red and green colors to depict life and draw a picture of realism. ...read more.

The orthogonal of the plaza tiles lead to a central vanishing point at the open doorway of the building, which corresponds to the architectural ideal of antiquity and the Renaissance. ________________ Venus of Urbino Titian, 1538 Oil on Canvas. http://lacomunidad.elpais.com/blogfiles/smanuelgutierrez/titian_venus_of_urbino.jpg In the Venus of Urbino, we can see a nude lady as the focus of the painting. Also in the painting, we see a dog which is sleeping at her feet, and also some maids who are looking for something in a chest. In her hand she clutches roses, the symbol of Venus and of love. Her pet dog shows the symbol of faithfulness which could be related to the bond of marital love. In the window is a pot of myrtle which is a symbol of constancy. Canvas and Oil paint were used to create the finished artwork. Titian applied pigment directly to the canvas to suggest form and movement. He used huge brushes, using broken brushstrokes over a layer of paint which already dried. His colors are sharp and strong with authentic use of light and shading, including his trademark of conveying light through color. The red tones of the matron's skirt and the muted reds of the tapestries against the neutral whites of the matron's sleeves and the kneeling girl's gown echo the deep Venetian reds set off against the pale neutral whites of the linen and the warm ivory gold of the ï¬esh. Titian uses color as a way to organize his painting and achieve a more realistic composition. ...read more.

Another subtle detail reveals these to be Amsterdam Arquebusiers: the three crosses of the Amsterdam coat of arms can be seen in the lapel of the lieutenant's jacket. The materials used were Oil paint and Canvas. Rembrandt created this painting by making the architecture in the foreground is more or less symmetrical. He also positioned a number of militiamen symmetrically. The captain and the lieutenant are standing just to the right of center. This asymmetry brings tension to the picture: the eye draws both the men a little to the left, in the direction they are walking which enhances the feeling of movement. The lines of a number of pole arms are in between and they connect the center of the structure with the space outside the painting. Rembrandt used mostly yellows and reds. He used chiaroscuro to heighten the sense of drama. This painting is balanced by shadows which define the pictures. The contrasts between light and shade in the painting enhance the feeling of action and movement. He also used light and shadows to create layers of dimension. Rembrandt used the fall of the light to focus attention on the most important figures which are the captain and the lieutenant. Also the brushstrokes are affected by the light, and not as well defined. The brightest thing in this painting is the child running a lot, and is balanced by the drummer boy who is much darker. This painting was created in the baroque era which was a time of allegory and emblems, and it simply showed just how artistic the views were back in the baroque era. ...read more.