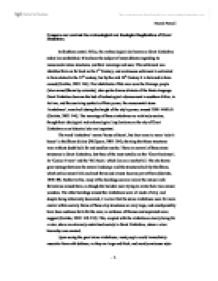 Compare and contrast the archaeological and ideological implications of Great Zimbabwe.

Compare and contrast the archaeological and ideological implications of Great Zimbabwe.

In Southern central Africa, the archaeological site known as Great Zimbabwe today lies uninhabited. It has been the subject of many debates regarding its monumental stone structures, and their meanings and uses. This settlement was inhabited from as far back as the 5th Century, and continuous settlement is estimated to have started in the 12th century, but by the mid 16th Century it is believed to have ceased (Garlake, 2002: 146). The inhabitants of this area were the Karanga people (later named Shona by colonists), who spoke diverse dialects of the Bantu language. Great Zimbabwe became the hub of technological advancement in southern Africa, in its time, and the surviving symbols of their power, the monumental stone ‘zimbabwes’, were built during the height of the city’s power, around 1300-1450AD (Garlake, 2002: 146). The meanings of these zimbabwes are relatively unclear, though their ideological and archaeological implications on the city of Great Zimbabwe as an historical site are important.

The word ‘zimbabwe’ means ‘house of stone’, but later came to mean ‘ruler’s house’ in the Shona dialect (Phillipson, 1985: 204), showing that these structures were without doubt built for and used by royalty. There are several of these stone structures in Great Zimbabwe, but three of the most notable are the ‘Great Enclosure’, its ‘Conical Tower’ and the ‘Hill Ruin’, which lies on a nearby hill. The site shows great synergy between the natural landscape and the structures built by the Shona, which utilise natural hills and rock forms and almost becomepart of them (Garlake, 1978: 89). Further to this, many of the buildings seem to mirror the natural rock formations around them, as though the builders were trying to create their own natural wonders. The other buildings around the zimbabwes were all made of clay, and despite being elaborately decorated, it is clear that the stone zimbabwes were far more central within society. Some of these clay structures are very large, and could possibly have been audience halls for the ruler, as evidence of thrones and separated areas suggest (Garlake, 2002: 149-150). This, coupled with the zimbabwes clearly being for a ruler, show an extremely centralised society in Great Zimbabwe, where a clear hierarchy was enacted.

Upon seeing the great stone zimbabwes, most people would immediately associate them with defence, as they are large and thick, and mostly enclosure style structures. Even the way the structures are built into the land could be seen as a defence tactic, as they add to existing natural defences. This theory however falls down in the fact that several of the sites are easily approachable from certain sides (Garlake, 1978: 89). Other assumptions about the structures have been made in the past, such as the Great Enclosure’s Conical Tower being thought to be a barbaric phallic symbol in Victorian times (Garlake, 1978: 88), but is now thought to represent a Shona grain tower.

The finding of several imported items such as glass beads, Chinese and Persian pottery, and Near Eastern glass, show that Great Zimbabwe was well linked with the trade routes, despite being far from the coast (Hall, 1987: 91). This would mean exporting their own items probably boosted their own economy. At the time of the zimbabwes’ emergence, most societies had become reliant on agriculture. These pastoral societies were mostly very successful and well sustained, however in times of drought their economy would undoubtedly suffer. Great Zimbabwe, like these societies, had an agricultural element to its economy, but unlike the other societies, Great Zimbabwe also had other elements to its economy, such as trade and mining (Connah, 1987: 247). This shows that as well as being a heavily centralised society, Great Zimbabwe was also successfully sustained by its people, and relied on its ability to utilise more than just farming to steady its economy.

Due to the primarily oral culture of many African societies, there is very little documentation to confirm any claims made by archaeologists. This means the facts we do know about Great Zimbabwe come almost entirely from archaeological evidence. As well as the stone structures, the only sculptures found from the Shona people were found at Great Zimbabwe. The beliefs of the Shona people are centred around ancestry and the ownership of the land. This is clearly reflected in the zimbabwes, with the connections between the buildings themselves and the landscape and features around them. (Garlake, 2002: 154). The finding of the only Shona sculptures here is clearly significant, and shows that Great Zimbabwe was somewhat of a cultural capital for these people. These sculptures take bird-like forms, and were found in the Hill Ruin area of the site. This stunning area is home to a large natural formation in the granite which also has the appearance of a bird-like creature, which may have been the inspiration behind the sculptures found. This too suggests the link between the natural landscape and the man-made creations of the Shona people. Also in this area evidence of altar-like structures, comprising of terraced slopes with low stone cylinders, has been found (Garlake, 1978: 90), as well as remains of monoliths which are believed to have been topped with the bird-like sculptures found near the hill ruin (Connah: 1987: 257). This evidence all suggests the Hill Ruin area of Great Zimbabwe was a religiously significant one, perhaps the centre of the Shona beliefs, and where religious ceremonies could have been held, the hill ruins are also believed to be the earliest structures at Great Zimbabwe, and the site for the city may have been chosen due to the religious significance of the area.

Overall, the archaeological implications of Great Zimbabwe are huge, and this is clear by the sheer amount of interest in the site from archaeologists ever since its discovery in 1871 by Geman geologist Carl Mauch (Connah, 1987: 223). The site is regarded by most as the place where the southern African tradition of dry-stone architecture reached its most impressive achievement (Phillipson, 1985: 204), and although not much conclusive evidence has been found here in comparison to other sites, we can still get a picture of what the Shona life in Great Zimbabwe would have been like. From the evidence found around the Hill Ruin area at Great Zimbabwe, one can see that the Shona were deeply religious, and from the sheer efforts it would have taken to build the stone structures there, we can see that Great Zimbabwe was highly advanced and organised. Despite the lack of documentary evidence, one can also see from the layout of the structures, and the Shona meaning of the word ‘zimbabwe’, that Great Zimbabwe was a very centralised society led by a clear ruler, and with a hierarchy of his officials below him. From the finding of several specific objects, we can see that the Shona people survived not only from farming, but also from mining and trading. This society can be seen as very civilised and forward-thinking, and was the hub of technological advancement in central south Africa for hundreds of years.

Another archaeological point which cannot be overlooked when studying Great Zimbabwe are the historical perspectives brought by its first discoverers. Carl Mauch, the first outsider to experience the site, claimed that the ruins were probably copies of both Soloman’s Temple, and the Queen of Sheba’s palace (http://www.bbc.co.uk/dna/h2g2/a21025513). These views are typical of the world view at the time, which was seeking to prove barbarism and find moral justification for the colonisation of Africa (Hall, 1987: 103). These early thinkers looked for anything but an African style within the architecture of Great Zimbabwe, believing Africans were not civilised enough to have built such monumental structures, and allowing their pre-conceived ideas and political pressure to affect their interpretation of the archaeology. This antiquated viewpoint, along with the Apartheid system in southern Africa, is what led to the country ‘Zimbabwe’ gaining its name, out of pride for their heritage and ancestors, who it is now believed did build Great Zimbabwe along with several other zimbabwes that followed.

The ideological implications of Great Zimbabwe stem from the beliefs of its inhabitants, the Shona people. Their beliefs are rooted in their own ancestry, with the land ‘belonging’ to these ancestors, and the dead of any family within the Shona remain a living presence and continue to manage the land after death (Garlake, 2002: 154). This ideology is represented within the buildings themselves, and their close connections to the land around them, both in their appearance and location. The land is also regulated through the god Mwari, who lives within the rocks of the landscape and controls the seasons (Garlake, 2002: 156). Looking at the religious ideologies of the Shona is the only way one can fully reach an understanding regarding the architecture of Great Zimbabwe, as the connection between the man-made structures and the existing land is clear.

In conclusion, the archaeological implications of Great Zimbabwe are many, and one can see the connections between the architecture and the economy, religion and centralisation of society. The ideological implications of the beliefs of the Shona people, however, prove that the people’s connections with the land around them were deep and ancestral. Overall, Great Zimbabwe is a site of great significance when looking at the archaeology of Africa as a whole, as it was once one of the great powers of the world, and yet is no longer in existence.

M. Hall, The Changing Past: Farmers, Kings and Traders in Southern Africa,