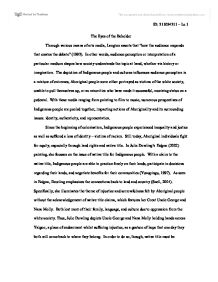 The Eyes of the Beholder Through various means of arts media, Langton asserts that "how the audience responds that creates the debate" (1993). In other words, audience perception or interpretation of a particular medium shapes how society understands the topic at hand, whether via history or imagination. The depiction of Indigenous people and cultures influences audience perception in a mixture of extremes; Aboriginal people were either portrayed as victims of the white society, unable to pull themselves up, or as minorities who have made it successful, receiving status on a pedestal. With these media ranging from painting to film to music, numerous perspectives of Indigenous people are pooled together, impacting notions of Aboriginality and its surrounding issues: identity, authenticity, and representation. Since the beginning of colonisation, Indigenous people experienced inequality and justice as well as suffered a loss of identity - victims of racism. Still today, Aboriginal individuals fight for equity, especially through land rights and native title. In Julie Dowling's Yalgoo (2002) painting, she focuses on the issue of native title for Indigenous people. With a claim to the native title, Indigenous people are able to practice freely on their lands, participate in decisions regarding their lands, and negotiate benefits for their communities (Yunupingu, 1997). ...read more.

In other words, racism is inevitable. Even when Indigenous people live normal lives like those of their white neighbours, e.g. having a well respected job and living an adequate life, the white community still shuns them. In One Night the Moon (Lucas et al., 2001), the search for a missing child led to the realization that racism remains a constant problem. By all means, the Indigenous tracker Albert only wanted to help Jim find his daughter, but he was denied consent for being black. Devastated and hopeless, Albert quit his job and gave up on his dream of being a tracker. In the end, Jim's wife, Rose, asked Albert to help her. Together, they found Emily dead by the hills, and Jim committed suicide out of guilt and shame. The moral of the story portrays Indigenous people as powerless but intelligent beings. Though he lived a life comparable to that of White Australians, having been rejected from what he did best made Albert weak. This depiction of Aboriginal people emphasizes the idea that Indigenous people lack a strong identity. Rather than challenging the law and white authorities, Indigenous people fear rejection. As a result, Aboriginal people are constantly perceived as incapable of standing up for themselves, giving up on their ambitions. ...read more.

Instead of giving in to white men like during the early years of colonisation by British men, these three women seduced the men for their money. In other words, Moffatt reversed the potentially powerless victims to women who knowingly exploited men who wanted their company. In this sense, Moffatt generates a whole new perspective on Indigenous women. After all, Aboriginal people do have the potential to override the social norms and stereotypes of being defenceless and victimised. To overcome inequality, Local Knowledge, a hip hop band, calls out for unity in their popular track Blackfellas (2005). This form of media is not only catchy, but it also educates its audience about the struggles that Aboriginal people experienced. The song helps to authenticate all the different races that exist under Aboriginality per naming them at the beginning of the song: "Rise up, rise up, all the murries, all the kooris, all the goories..." Moreover, the song allows Indigenous people to voice their opinions and express them in a way that would attract a higher calibre of younger generations as a means of informing them of their lineage. Overall, film and arts media provide efficient means of unraveling the stereotypes, history, and truths of Aboriginal people. Although some media are more effective and accurate than others, the ending message of the day lies within the eyes of beholder: the audience. ...read more.