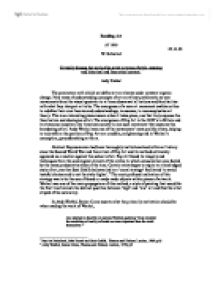 Critically discuss the work of an artist in terms of style, meaning and historical and theoretical context. Andy Warhol

Reading Art AF 1005 05.11.03 W. Schwind Critically discuss the work of an artist in terms of style, meaning and historical and theoretical context. Andy Warhol The parameters with which we define art are always under constant organic change. New ways of understanding concepts of art are at best problematic as new movements force the visual spectator to at times disavowal all notions and familiarities with what they interpret art to be. The emergence of a new art movement enables critics to redefine their own theories and understandings, in essence, to reconceptualise art theory. This is an interesting phenomenon when it takes place, one that truly exposes the theorization and ideologies of art. The emergence of Pop Art in the 1950's in Britain and its vivacious inception into American society is one such movement that captures this broadening of art. Andy Warhol was one of the movements' most prolific artists, helping to truly affirm the position of Pop Art as a credible, enlightening and in Warhol's conception, groundbreaking art form. Abstract Expressionism had been thoroughly institutionalized within art history since the Second World War and the arrival of Pop Art and its methods ultimately appeared as a reaction against this school of art. ...read more.

Crone notes the meaning inherent within works of this kind, ...Warhol portrays the condition of society rather than his own aesthetics. His pictures thus become valuable as source material, open to and understandable to everyone, they no longer require unraveling by the expert. The era of mass media was a condition of the sixties, and the celebrity portraits that Warhol made are monuments to the idea of a social art. The people he chose to represent where all iconic figures within American society, consumed on a mass level, they became objects of a popular culture, one that exposes and repeats itself. The portrait of Jackie Kennedy entitled The Week That Was consisted of a series of pictures taken of Jackie before, during and after the murder of John. F. Kennedy. Jackie is pictured displaying a number of emotions, laughing, smiling and in mourning, the effect alludes to an almost vulgar exhibition of emotion. However, this is the art of the hyperreal, or new realism as these were pictures that had been seen countless times throughout the media world. The silk-screens of Marilyn Monroe and Elvis where much the same, vibrant colors were used almost cartoon like in the case of Monroe. ...read more.

The function of Warhol's therefore instills upon the observer a new way of understanding the parameters of art and all that it can encompass. Warhol's art is not bound by composition of color or fluidity of form. It is not an art created for aesthetic pleasure, this is obvious, put asks of the observer to question why they are looking at this piece in a gallery and not a historical textbook. It is only when these photographs are assimilated into the machinery of art do their political and historical significance become realized. The methods and style of Warhol's work was governed by his own unique awareness of himself as a machine. The Factory in which he produced his work mirrored the industrial process with which he created his silk-screen paintings. Disavowing any personality in his work, creativity was reduced to the minimum of only choosing the photo's he was going to silk-screen. He disrupted the boundaries of art by placing common objects or images on artistic pedestals, forcing the observer to reevaluate images that had become intuitively 'comfortable' within society that their meaning had changed. His exploration of the mass consumed and mass neglected images within American opened new realizations within art. Art could now be interpreted without the need of aesthetics and personal expression; it could simply be the expression of feeling through a singular image. ...read more.