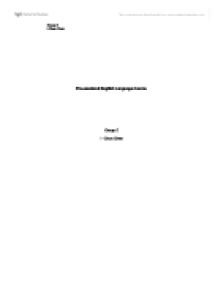 Describe in detail one of the many stands of post-modern thinking.

Pre-sessional English Language Course Group 5 I - Chun Chen Cultural Background Studies: Postmodernism Essay Title Describe in detail one of the many stands of post-modern thinking that you have explored and show how it affects, or is inherent in, as aspect of your own field of study, or an aspect of your own country and culture. It is said that now we human beings are living in a post-modern era, an era which we are what we buy. According to sociologist Zygmunt Bauman, 'for most members of contemporary society, individual freedom, if it is available, comes in the form of consumer freedom, with all of its agreeable and less palatable attributes.' (Stuart Sim, 2001, p64) In order to explore this post-modern thinking more deeply, the cultural artefact of cosmetic surgery is chosen, and analysed in relation to consumer culture and contemporary social identity. Generally speaking, unlike plastic surgery that aims to recover the serious injury, such as burn damages, and natural defects, such as harelip; cosmetic surgery is a procedure that is done purely to enhance the appearance of body parts; examples include procedures, operations such as face-lifts, nose reshaping, skin resurfacing, breast augmentation, and fat suction procedures, which are done only for appearance. ...read more.

The main consumers of the cosmetic surgery are mostly women. They are ordinary people, mostly female, paying cash, and keep cosmetic surgeons busy. As expensive as it is, Contemporary Women's Issues Collection mentioned 'only 30 percent of patients come from families earning under US$25,000, and another 35 percent earn between US$25,000 and US$50,000...Another group of cosmetic surgery consumers are the middle aged men, they believe surgery would solve their emotional problems and improve their sex and social lives or careers'. From the information and statistic chart that are described earlier in this essay. It clearly shows that in the twentieth century, urbanization, industrialization made the locus of personal identity from the family to self-representation. Physical appearance becomes very important either in self-identity or society, such us workplace. And since the beauty was no longer difficult to achieve because the technology of cosmetic surgery now is so advanced that enables human beings to alter and transform from heads to toes, and also actually it is not very expensive, most people can afford small cosmetic surgery operations, such as eyelid tightening, nose job, by saving only one month salary. It can seem as we are living in a culture, a society that increasely requires woman to purchase femineity through submission to cosmetic surgeons and their magic knives. ...read more.

It is sad, however, physical appearance indeed takes an important part in the Japanese society. Although people may have more confidence, gain more respects from the others and have higher social status by after reshaping outside physical appearance. Some people get the serious mental problem, they undergo the operations again and again, and just not satisfy their appearance, it is called - 'Extreme body image dissatisfaction that can be a symptom of body dimorphic disorder, a psychiatric condition defined as a preoccupation with a slight defect in appearance that leads to excessive concern and interruption in daily functioning.' (Rose Weitz, 1998) In conclusion, it may be said that cosmetic surgery is a method to approach extremely beauty, which helps enhance a person's confidence, and social status. It is controversial to argue whether it is necessary to undergo a cosmetic surgery in this contemporary world; it is only sad that most people search their identities by consuming 'cosmetic surgery' just like purchasing everyday commodity, because there will be no differences between individuals. However, the reality is that now is the era of post modernity, the world is following this trend, and there is no exactly definition and answer, just let the world be what it should be. ...read more.