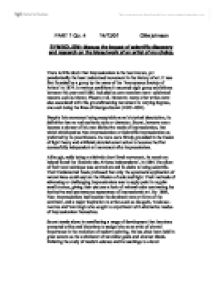 Discuss the impact of scientific discovery and research on the ideas/work of an artist of my choice.

PART 1 Qu. 4 14/12/01 Ollie johnson SYMBOLISM: Discuss the impact of scientific discovery and research on the ideas/work of an artist of my choice. There is little doubt that Impressionism is the best known, yet paradoxically the least understood movement in the history of art. It was first founded by a group by the name of the 'Anonymous Society of Artists' in 1874. In various coalitions it mounted eight group exhibitions between this year and 1886. Included as core members were celebrated masters such as Monet, Pissaro et al. However, many other artists were also associated with this groundbreaking movement to varying degrees, one such being the likes of Georges Seurat (1859-1891). Despite this movement being acceptable as an historical description, its definition has no real aesthetic style or character. Seurat, however soon became a pioneer of his own distinctive mode of Impressionism, that which developed as Neo-Impressionism or Scientific Impressionism as preferred by its practitioners. Its roots were firmly grounded in the fusion of light theory and artificial pictorial construction to become the first successfully independent art movement after impressionism. Although, sadly being a relatively short lived movement, its members helped found the 'Societie des Artistes Independants', in 1884.The allure of their new technique was centred around its claim to being scientific. Their fundamental thesis professed that only the systematic application of natural laws could capture the illusion of coloured light. Their methods of advancing or challenging Impressionism was to apply paint in regular small strokes, giving their pictures a look of rational order contrasting the instinctive and spontaneous appearance of Impressionist art. ...read more.

I believe the problem therein lies as to how and if we can distinguish Seurat as a poet or a technician or both. It remains ambiguous to many exactly how dependant Seurat was on theory and mathematical formulas, various texts of the artist suggest that nearly all his 'science' was still based upon his boyhood readings of Charles Blanc. It is argued that the 'scientific' optically illusional dots are nothing more than just small touches of paint in various shapes that shift and flow with the images and are interlocked with the underlying paint. In addition to this argument they do not determine a picture's coloration because, although they contribute to it, they are only the final strokes atop a complex net of brushwork. Many of Seurat's major studies did not form a steady progression toward a preconceived composition, and by his own admission it was some years after reading Ogden Rood's treatise before he learned how to abandon earth colours in favour of exploiting transient colour reactions in nature. There is no doubting however, the importance attributed to Seurat's readings in colour science. He wanted to be perceived as a technician of art, and so borrowed from science some of its key rules and principles, including regularity and clarity of pattern. Ultimately, it can be said that Seurat discovered himself as an inventor who manipulated science and colour theory. Even Seurat's trademark painted borders and frames, one of the most idiosyncratic features of his art were responses by the artist to natural laws. ...read more.

They are the essential ingredients of the picture that communicates its mysterious atmosphere, an impending feeling of disquietude, as though what superficially appears to be tranquil peace on the riverbank is vulnerable to destruction. With this composition Seurat used every skill in his technical repertoire to create a tension of great artistic effect, experimenting with the phenomenal, the observed and the imagined. As a critique of the piece written by writer and admirer Felix Feneon defines the essence of Seurat's optical mixtures: "If, in La Grande Jatte of M. Seurat, one considers, for example, a square decimetre covered with a uniform tone, one finds all its constituent elements on each centimetre of this area, in a swirling crowd of slender maculae. For this greensward in shadow: most of the touches give the local colour of grass; other touches, oranges, are scattered about to express the feeble solar action; still others, purples, introduce the complement of green; a cyan blue, provoked by the proximity of a patch of grass in sunlight, increases its siftings toward the line of demarcation and then thins them out progressively". It cannot be doubted that Seurat's art, and this piece proves so, embodied the progressive tendencies of a middle-class culture. By grounding his technique in scientific method, it was a testimony to the fact that he believed mankind was able to construct order out of sensory data. Charles Blanc's equation between classicism and social and artistic transformation through science and technological advancement was clearly relevant to Seurat's work ethos. Furthermore it enables us to reconcile the artist's dual allegiance to classical form and modern technology. ...read more.