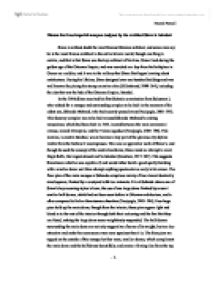 Discuss the three imperial mosques designed by the architect Sinan in Istanbul.

Discuss the three imperial mosques designed by the architect Sinan in Istanbul. Sinan is without doubt the most famous Ottoman architect, and some even say he is the most famous architect in the entire Islamic world, though one thing is certain, and that is that Sinan was the key architect of his time. Sinan lived during the golden age of the Ottoman Empire, and was recruited as a boy from his birthplace in Greece as a soldier, and it was in the military that Sinan first began learning about architecture. During his lifetime, Sinan designed over one hundred buildings and was well known for placing his stamp on entire cities (Hillenbrand, 1999: 264), including the city that was the hub of the Ottoman Empire, Istanbul. In the 1540s Sinan received his first Sultanic commission from Suleyman I, who wished for a mosque and surrounding complex to be built in the memory of his eldest son, Sehzade Mehmed, who had recently passed away (Necipoglu, 2005: 191). This funerary complex was to be built around Sehzade Mehmed's existing mausoleum, which had been built in 1543, located between the main ceremonial avenue, named Divanyolu, and the Valens aqueduct (Necipoglu, 2005: 196). This location, in central Istanbul, was to become a key part of the glorious city skyline visible from the harbour it encompasses. ...read more.

The complex is on a monumental scale, as is the dominant aim of Ottoman architecture, and completely dominates the city skyline when seen from the Istanbul district of Galata (Goodwin, 1971: 216). Upon completion, though Suleymaniye had a smaller dome than Hagia Sofia, it was still an amazing feat of both architecture and engineering. Like the mosque at Sehzade, Suleymaniye has one large dome that is flanked by several half-domes for style, space, light and structural purposes. Several inscriptions inside the mosque liken it to the paradise promised to the people who worshipped there, as well as the scent of flowers coming through the windows, and floral design of the Mihrab, which have been said to make the worshippers feel as though they are in an earthly vision of paradise (Necipoglu, 2005: 215). The funerary garden can be viewed through the stained glass windows on the qibla wall, which fits with the floral design of the Mihrab. The qibla wall, apart from the Mihrab, is entirely made up of openings, creating a stunning sensation of light and freedom, and with a total of 249 windows in the mosque (Necipoglu, 2005: 215), one can see how the building must feel almost heavenly. Apart from these numerous windows, the decoration inside is relatively sombre, with white walls unlike the red sand accented walls of Sehzade. ...read more.

This mosque was different from several of Sinan's other works, and since this was his masterpiece and a culmination of his lifelong learning, one can assume the techniques used on his other projects were almost prototypes for Selimiye. Sinan used no half-domes to flank the main dome at Selimiye, and instead supported it with his trademark slender, fluted piers that make the dome look weightless, using eight of them. The Mihrab of the mosque is unusually set back from the main dome, and is in its own section of the building. This allows even more light to get in to the mosque (Selimiye has many windows like Sinan's other works), and marks the Mihrab out as a special part of the mosque. Another odd factor about this mosque is the central fountain beneath the Muezzin's tribune (Goodwin, 1971: 264), which breaks up the lines during prayer and blocks the view of the Mihrab according to orthodox Muslims, and its reason for placement there is unknown. However, the design behind Selimiye became the key influence on later Ottoman architecture, and clearly depicts Sinan's legacy in the Middle East. These three imperial mosques designed by Sinan show clear corroboration with one another, and Sinan's work can be clearly identified through common features found in all of his buildings. Sinan was the greatest Ottoman architect to have lived, and possibly the greatest architect in the entire Islamic world, which one only has to look at Selimiye, the culmination of years of practice, to believe. ...read more.