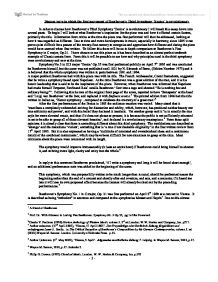 Discuss ways in which the first movement of Beethoven's Third Symphony 'Eroica' is revolutionary In order to discuss how Beethoven's Third Symphony 'Eroica' is revolutionary I will break this essay down into several parts. To begin I will look at what Beethoven's inspiration for the piece was and how it effected certain factors, primarily the title. Information from critics at the time the piece was first performed will then be addressed, looking at how it was regarded as different. Due to time and more developments in music, especially in harmony, since 1805 it can prove quite difficult for a person of the twenty-first century to recognise and appreciate how different and daring the piece would have seemed when first written. To follow this there will be an in depth comparison to Beethoven's First Symphony in C major, Op.21. I have chosen to use this piece as it has been described as an almost perfect textbook example of Classic sonata form. From this it will be possible to see how and why principles used in the third symphony were revolutionary and new at the time. Symphony No.3 in E? major 'Eroica' Op.55 was first performed publicly on April 7th 1805 and was conducted be Beethoven himself, but the score was not published until 1821 by N. Simrock of Bonn, (Edition Number 1973) and it is believed that the whole symphony was written in parts between 1801 and 1804. ...read more.

It may be noted that most of the instruments are doubled up in octaves. There are four bars before the first end of the repeat bars appears in the third symphony, the introduction basically being the tonic chord repeated. This lack of introduction is quite different from the classical sonata form previously seen, and unlike the first symphony, the home key is established immediately. Once the expositions have been reached there are many more contrasting differences. The length is the most obvious factor, Symphony 1's exposition being 96 bars in length and Symphony 3's being 155. 'Most movements in sonata form contain at least two clearly defined themes',10 and this is true in the first symphony. The first theme appears in the first violins at bar 13, and the second, again by the first violins at the upbeat to bar 34. The first theme in the third symphony is quite apparent also, primarily displayed by the cellos in bars 2-5, although it is the first four notes that are often considered as the theme. As for the second theme, there are several possibilities. Some believe it enters at bar 45 with the oboes, and initially this is what I believed. However, some view this as a 'bridge to the secondary theme section',11 which begins at bar 57. When comparing the sketches made by Beethoven this theory of bars 45 - 57 being a bridge looks true, due to the theme of descending not appearing in his sketches. ...read more.