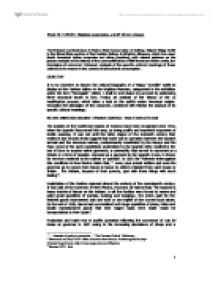 Dissident consumption, or is it?

Week 10, 17/03/03- Dissident consumption, or is it? Oliver Johnson The Refusers and their place in East-to-West Consumption of clothing. Object: Hippy Outfit in the Street Style section of the Fashion Gallery in Brighton Museum, which has used North American Indian turquoise and silver jewellery, with related patterns on the jacket: analysis of the history of the commodification of SW American Indian crafts, the ideologies of consumer 'refusers', analysis of the specific cultural meanings of these clothes to the wearer in the context of subcultural consumption. OBJECTIVE It is my objective to discern the cultural biography of a 'Hippy/ Traveller' outfit on display at the Fashion Gallery in the Brighton Museum, categorised in the exhibition under the term 1'Renegade' (slide). I shall try and shape my account by addressing three structural issues in turn. Firstly; an analysis of the history of the co modification process, which takes a look at the outfits native American origins. Secondly; the ideologies of the consumer, combined with thirdly; the analysis of its specific cultural meanings. NATIVE AMERICAN ORIGINS- SPANISH CONTROL- EARLY EXPLOITATION The peoples of the Southwest regions of America have been recognised since 1540, when the Spanish 'discovered' this area, as being prolific and masterful exponents of textile weaving. It was not until the latter stages of the sixteenth century that evidence and records firmly suggest that trade was in operation between the Spanish arrivals and the American natives, predominantly constituted by the Navajo and the Hopi. Some of the early expeditions undertaken by the Spanish often resulted in the use of force to acquire native garments, a commodity that served to represent as a tribute or a form of taxation. ...read more.

The 1960s spawned an age that was to constitute an unusually large and vociferous youth population, who revelled in this affluence and leisure, exuding new levels of political and cultural confidence in response to the revolutionary advancement and expansion of media access. Thus, facilitating a heightened sense of awareness for political and cultural change. The sixties again brought with it a sizable and controversial war, culminating in a state of alienation and fear of a world wide political crisis, the knock on effect incurred a radical fascination with notions of spiritual revival and invention, in turn sealing a departure from any faith in high technology and austere intellectuality. Membership traits included; 6'colourful or ragged garments, long hair on males, sexual promiscuity, use of drugs for pleasure and insight, esoteric and eclectic religious politics, earnest commitment to group process and honesty, and language that evolved rapidly to stay ahead of usurpation by the movement's vast and fascinated audience'. American Indians epitomised the very essence and ethos of what this young white movement was searching for. 7'Ecologically aware, spiritual, tribal, anarchistic, drug-using, exotic, native, and wronged, the lone genuine holdouts against American conformity and success'. This newly formed cult integration formed the basis of what would later evolve and proliferate into a situation that David Howes has since described as the, decommodification of 'Indianness', whereby Indian practices have eventually come to be appropriated and misrepresented. The new counterculture embraced the old with such vigour, enthusiasm and emulation that the young white Americans were effectively telling the Indians how to be Indian. A pivotal movement came in 1967 when at an event called 8'The San Francisco Human Be-In' or subtitled as the, 'Gathering of Tribes', huge groups congregated calling themselves, "hippies", "freaks" and "longhairs"; many of whom adopted traditional native Indian pseudonyms. ...read more.

In the same way I take this idea of bricolage when applied to hippie/ traveller styles and my case study to represent a subculture that purports ideologies of an ecologically, spiritually and a harmoniously minded coexistence that finds solace in anti-conformist and anti-'civilised' practice, when considering the significance and symbolism encoded with in American Indian motifs. As the meanings attached to these signs that are part of a set of signs are re-ordered and re-contextualised, juxtaposing individual signs with new meanings. Do you think your style of dress retains the impact it did in the past? 18Sophie Xi-Zeta: Yeah I think so. You get looked at in the street, I don't notice, I get told this, I don't notice cos I'm chronically short sighted, but you get looked at in the street and that may be my intention when I was younger cos I did, I will admit to going up to King's Road and posing and charging tourists �1 for a photo etc. etc. but now, I'm so comfortable with it, I would feel uncomfortable in jeans and a t-shirt. I suppose there's, there's an element of vanity in it- but then that's kind of natural, it's kind of, tribes people do it, you're doing it to send out signals to people, "You're like me, be attracted to me", not necessarily in a sexual way, but just for making friends, maybe gathering a kind of a tribe round you, you're sort of sending out a signal saying "I look this way because I like these things, I have these beliefs. Hey come and join me!". It's just that attraction thing and you know it's good, it's good if you can go out and share your love of music or your beliefs or whatever. ...read more.