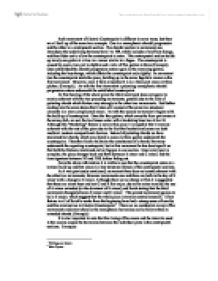 Each movement of Electric Counterpoint is different in some ways, but they are all built up of the same two concepts. One is a monophonic chordal progression and the other is a contrapuntal section. The chordal section in movement one introduces the underlining harmony bars 1 to 109, which includes a brief key change, and then fades out to allow the counterpoint to enter. This contrapuntal section builds up slowly one guitar at a time in a manor similar to a fugue. The counterpoint is caused by canon, two part in rhythm and a ratio of five guitars to three (Example). Once established the chordal progression enters again in the remaining guitars, including the key change, which affects the counterpoint only slightly. In movement two the counterpoint starts the piece, building up in the same fugalistic manor as the first movement. However, once it fully completed it is in a three-part canon at three pitches. (Example). As with the first movement a pulsating monophonic chordal progression enters underneath the established counterpoint. At first hearing of the whole piece the third movement does not appear to remain coherent with the two preceding movements, possible due to the lack of pulsating chords which feature very strongly in the other two movements. ...read more.

A key feature in all of Reich's works from the beginning have had a strong sense of tonality and this remains true in Electric Counterpoint.2 There are no accidentals in any of the movements and every chord in the monophonic harmonies can be fully written as extended chords. (Example) It is also important to note that the timing of the canon and the intervals used in the canons causes the harmonies between the individual parts in the contrapuntal sections. Examples The inspiration between the melodic motif used in the first movement uses "a theme derived from Central African horn music".3 As you can see from Example X, it is very simple and slightly syncopated in rhythm. Although nothing is said about the melodic inspiration of movements two and three it is possible that they are influenced by African music. Movement two has a nineteen-count motif over 4/4, 3/4 and 5/8 bars. As with the first motif it is very syncopated and the canon emphasises this. (Example X and Y) The motif of the third movement is a single bar of 3/2, which does eventually fall over a 12/8 bass line, and is also very syncopated. (Example X) The live guitar plays "melodic patterns that result from the overall contrapuntal web".4 However, when the piece is heard a different melody can be heard which is not specifically notated. ...read more.

By changing the timbre across the movements, for example, steel strung acoustic for movement one, nylon classical for movement two and electric for movement three, the piece as a whole could lose a considerable amount of unity. From the above information it is visible that Reich maintains coherence across the three movements of Electric Counterpoint in a number of ways. The two concepts of monophony through chords and counterpoint caused by canon, the fugalistic entry by the guitars, the key signatures, the strong tonal centre throughout, the repeated melodic motifs and the influence behind them, the steady pulse, the lack of pauses between the movements, the dynamics and the timbre are ones mentioned here. Electric Counterpoint is the third of three counterpoint pieces written by Reich. The first is "Vermont Counterpoint" (1982) for flute and tape, "New York Counterpoint" (1985) the second for clarinet and tape and finally concluding with "Electric Counterpoint" (1987). Reich states "New York counterpoint is a continuation of ideas in Vermont Counterpoint".6 Therefore, as it has been noticed that there is a demand for academic writing on Reich and his lesser-known works, it could be interesting and useful to see how Steve Reich maintains coherence across the three Counterpoint pieces. 1 Writings on Music 2 John Pymm 3 Writings on Music 4 Writings on Music 5 John Pymm 6 Writings on Dance ...read more.