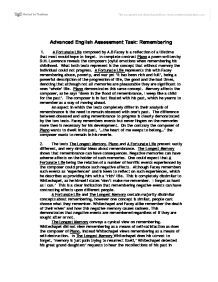 Advanced English Assessment Task: Remembering 1. A Fortunate Life composed by A.B Facey is a reflection of a lifetime that most would hope to forget. In complete contrast Piano a poem written by D.H. Lawrence reveals the composers joyful emotions when remembering his childhood. What both texts represent is the concept that without memory the individual could not progress. A Fortunate Life represents this with Facey remembering abuse, poverty, and war yet 'it has been rich and full', being a powerful description of the progression of life, the good and the bad times, denoting that although not all memories are pleasurable they are significant to ones 'whole' life. Piano demonstrates this same concept. Memory affects the composer, as he says 'down in the flood of remembrance, I weep like a child for the past'. The composer is in fact fixated with his past, which he yearns to remember as a way of moving ahead. An aspect in which the texts completely differ in their analysis of remembrance is the need to remain obsessed with one's past. The difference between obsessed and using remembrance to progress is clearly demonstrated by the two texts. Facey remembers events but never lingers on the memories more then is necessary for his development. ...read more.

Likewise Lawrence utilizes visual imagery such as; 'small poised feet,' to enable the reader to imagine the experiences of the composer. A person is better able to understand something that they have experienced. Imagery is an emotive device used by the composer to develop the relationship for the reader to the composer enabling the reader a better understanding of the emotions felt as a consequence of remembering. Dissimilarly to D'Aguiar's approach of creating a connection for the reader to Whitechapel in The Longest Memory via narrative, Elie Wiesel makes use of rhetorical questions to present his argument. Wiesel wants to emote the reader through rhetorical questions with the intention to bring about the readers thought on the matter. As a result the reader develops an understanding and is able to absorb the consequences felt by the composer as result of his/her memories. Consequences such as anger and bitterness are understood, 'is it not true that all the victims were Jews. But all the Jews were victims'; such a statement brings about thought in the reader and subsequently enhanced understanding of such consequences. As has been clearly demonstrated, composers shape readers emotions and understanding of events through different techniques such as the different writing styles used by D'Aguiar, the colloquial language employed by Facey, the imagery utilized by Lawrence and Wiesels's use of rhetoric. The consequences are better understood as result of the personal connections developed for the reader to the composer/character. ...read more.