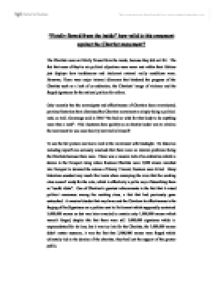 &quot;Fatally flawed from the inside&quot; how valid is this argument against the Chartist movement?

"Fatally flawed from the inside" how valid is this argument against the Chartist movement? The Chartists were not fatally flawed from the inside, because they did not fail. The fact that none of they're six political objectives were never met within their lifetime just displays how troublesome and intolerant external really conditions were. However, There were major internal dilemmas that hindered the progress of the Chartists such as a lack of co-ordination, the Chartists' image of violence and the forged signatures for the national petition for reform. Only recently has the sovereignty and effectiveness of Chartism been re-evaluated, previous historians have dismissed the Chartism movement as simply being a political mob, as R.G. Gammage said in 1854 "He had no wish for that body to be anything more than a mob". This illustrates how quickly an ex-chartist leader was to criticize the movement he was once heavily involved in himself! To see the full picture one has to look at the movement with hindsight. ...read more.

The fact that none of the Chartists objectives were achieved during the lifetimes of any of them is a very weak argument against Chartism. The times were wrong for the Chartists to bring these radical proposals to the public eye; the time was not yet ripe. There were far to many conflicting images about the Chartists being conveyed by Government Propaganda and violent uprisings like the Plug Plots, which scared the working-class. At the time, the Co-operative movement seemed much more favourable for the working-class, it provided clear objectives and focused on achievable goals which led to them recruiting 100,000 members. There were massive flaws in Chartism, which did lead to its death, but one has to give kudos to them for bringing the problems out into the open. The government played into these internal problems by exposing them even more and used them to their advantage by spreading propaganda: This depiction of the storming of a house in Newport portrays the Chartist movement as an unruly mob, which is true to an extent, there were violent uprisings but not to the extent shown here. ...read more.

Even more importantly though was the external environment in which the Chartists were operating, the Government would never have accepted any of the six points so soon after the 1832 Reform act. The Chartists' demands and objectives were far to radical unachievable for people to consider, which is why so many rival movements like the ant-corn law league and the Co-Operative movement benefited from the gain of members from the blunders of the Chartism movement. The Chartism movement was the first nation-wide organisation that kindled the workingman's interest in politics. The Chartism movement failed in its time but now looking at it with hindsight you can see that it did bring the ideas to the table and after many years, 5 out of the six objectives were achieved which included the: vote for every man (aged 21 and over), introduction of the secret ballot, abolition of property qualifications for MP's, Payment for MP's and the introduction of equal sized constituencies. The Chartists had internal problems that did lead to the fall of the movement but nevertheless the 5 objectives were enacted. The general public weren't yet ready for these radical and immediately unachievable goals so they simply didn't support them. ...read more.