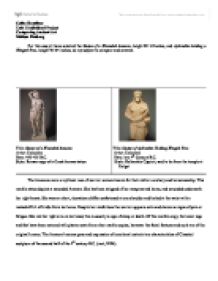 For this essay I have selected the Statue of a Wounded Amazon, height 80 1/4inches, and Aphrodite holding a Winged Eros, height 49 3/4 inches, as my subject to compare and contrast.

Celita Hamilton Unit 2 Individual Project Comparing Ancient Art Melissa Zimberg For this essay I have selected the Statue of a Wounded Amazon, height 80 1/4inches, and Aphrodite holding a Winged Eros, height 49 3/4 inches, as my subject to compare and contrast. Title: Statue of a Wounded Amazon Title: Statue of Aphrodite Holding Winged Eros Artist: Unknown Artist: Unknown Date: 450-425 B.C. Date: late 4th Century B.C. Style: Roman copy of a Greek bronze statue Style: Hellenistic Cypriot; said to be from the temple at Golgoi The Amazons were a mythical race of warrior women known for their skills in archery and horsemanship. This marble statue depicts a wounded Amazon. ...read more.

The Amazon's serene pose and expression of emotional restraint are characteristics of Classical sculpture of the second half of the 5th century B.C. (met, 2006). In this sculpture made of limestone, the goddess is plainly identified as Aphrodite by the small figure of Eros, who perches on her shoulder. Aphrodite wears a crown decorated with palmettes alternating with nude females that remind of the representations of Astarte. She has on a necklace of pendant blossoms and a chiton with himation (cloak) that comes up over the back of her headdress. The long spiral locks of hair falling over both shoulders recalls statues of young maidens (korai) from the Athenian Acropolis in 5th and 6th century B.C. ...read more.

The Aphrodite has no fluidity nor does it display any features to determine the emotions of the sculpted. The Amazon represents the strength and vulnerability of a woman all at the same time. It represents the pride of a warrior even when they are beaten. Aphrodite is representational of the deity of love. This is conveyed in the sculpture by her holding the winged Eros as he is perched on her shoulder. The Amazon is of the Italian Peninsula and Aphrodite is of the Eastern Mediterranean. In conclusion it is clear that both sculptures are a symbol of the strength or significance of females in each culture. Reference Page: Met Museum. Statue of a wounded Amazon. Retrieved March 31, 2006 from http://www.metmuseum.org/toah/hd/god1/hod_32.11.4.htm Met Museum. Statue of Aphrodite holding winged Eros. Retrieved March 31, 2006 from http://www.metmuseum.org/toah/ho/04/wae/hod_74.51.2464.htm ...read more.