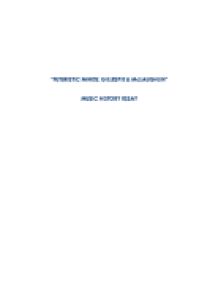 "FUTURISTIC MINDS: GILLESPIE & McLAUGHLIN" MUSIC HISTORY ESSAY "FUTURISTIC MINDS: GILLESPIE & McLAUGHLIN" In 1917 the Original Dixieland 'Jass' Band's released their recording titled Dixie Jass Band One Step. Alexander, Scott (2008) provided information about the first Jazz records. This is considered by most musicologists as the first Jazz record to be released. This brings the history of Jazz almost to a whole century now. As with all musical styles and genres Jazz has changed over the years and developed several branches and sub-genres. In the early days of the Jazz it was very obvious that this new style of music was based on a fusion of other existing musical genres such as the ragtime, the blues and work songs. Alexander, Scott (2008) provided information about the history of Jazz. New Orleans music is considered to be the first true Jazz style. It was at first played by small bands mainly consisting of African American musicians and included different wind instruments such as the tuba, the trombone, the trumpet and the clarinet as well as stringed instruments such as the double bass, the violin, the banjo or the guitar, as well as different drums or percussion instruments. ...read more.

Gillespie died in 1993 of pancreatic cancer having received fourteen honorary doctorates and a Grammy for Lifetime Achievement. Another jazz artist who is a lot more recent and still alive who played and still plays a similar role to the shaping of jazz is the guitarist John McLaughlin. He was born in 1942 in South Yorkshire. As a child he learned to play the violin and the piano after which he picked up the guitar, which quickly became his first instrument. During his childhood he was exposed to a lot of different musical styles. Anderson, Mark (2004) provided information about John McLaughlin's life, his brother exposed him to blues and flamenco while his mother exposed him to classical music and jazz. During his early years as a guitarist he moved to London to work as a session guitarist performing mainly commercial R&B and pop music. McLaughlin, John (2010) provided information about his own influences, this left him somehow unsatisfied and led to a move to New York in 1969 where to become part of Tony Williams' band Lifetime. He subsequently went on to record with Miles and was featured on several albums amongst which were In a Silent Way and Bitches Brew. ...read more.

Gillespie was a member of the Bah�'� Faith a monotheistic religion based on Islam and believing in the unity, peace and justice on a global scale. Gillespie often refers to his faith as giving him strength and enabling him to be at peace with himself. Very similar to that McLaughlin is a follower of Sri Chinmoy an Indian spiritual teacher basing his beliefs on daily meditation and religious tolerance. McLaughlin devotes his album My Goal's Beyond to Chinmoy. It is also from Chinmoy that McLaughlin received the name Mahavishnu which literally translated means the Great Creation. It is obvious that Chinmoy was one of the major influences which led McLaughlin to explore Indian music in such depths and incorporate it in his playing. This clearly shows that despite Gillespie and McLaughlin living at two very different time periods they still had quite a few things in common. Not only did they share a musical genius but they also both found themselves ahead of their times. They both contributed a vital part to the progress of jazz and even though that they were not the most recognized by the public they are often stated by many key musicians as having had a huge and important role in their development. ...read more.