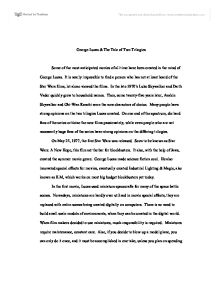 Geogre Lucas and The Tale of Two Trilogies

George Lucas & The Tale of Two Trilogies Some of the most anticipated movies of all time have been created in the mind of George Lucas. It is nearly impossible to find a person who has not at least heard of the Star Wars films, let alone viewed the films. In the late 1970's Luke Skywalker and Darth Vader quickly grew to household names. Then, some twenty-five years later, Anakin Skywalker and Obi-Wan Kenobi were the new characters of choice. Many people have strong opinions on the two trilogies Lucas created. On one end of the spectrum, die hard fans of the series criticize the new films passionately, while even people who are not necessarily huge fans of the series have strong opinions on the differing trilogies. On May 25, 1977, the first Star Wars was released. Soon to be known as Star Wars: A New Hope, this film set the bar for blockbusters. ...read more.

Lucas also loved the epic establishing shots, in which he mostly used miniatures in the first films as well. Even the explosion of the Death Star was created using a much smaller scale Death Star, which then actually exploded in front of the camera. In the later trilogy, Anakin's story, many of the scenes were filmed in front of blue screens, in a way that Lucas and the scenic designers could paint their own backgrounds and landscapes. George Lucas created the entire world of Star Wars; I believe he utilized the blue screen technology in order to truly express his visions of what he thought the extra-terrestrial planets would look like. It would be financially impossible for him to actually create tangible environments he wanted the audiences to witness. It was only logical for him to digitally build the worlds of the films. One of the most significant changes that Lucas has made between the two trilogies is the creation process of the non-human characters. ...read more.

He would have used the same technology in the 70's and 80's, were it available. He even digitally remastered the original trilogy for its DVD release. I thoroughly enjoy the epic landscapes he creates in the films. The fact that the backgrounds actually look like a beautiful painting is a good thing. I do not believe they look like cartoons; they may be vibrant and colorful, seeming a bit unrealistic, but the entire world we travel to when we watch the films is unrealistic. The films take place in other worlds and other galaxies, the audience should expect to see things they could never have imagined. George Lucas has created these worlds out of his own imagination, and I firmly believe he wants to express these visions as vividly as possible. The films may be for the fans, but it is up to Lucas, not the fans, to decide how to create the worlds, and what to inhabit them with; may it be people in costumes, or creatures designed entirely on a computer, it is no one person's choice, but George's. ...read more.