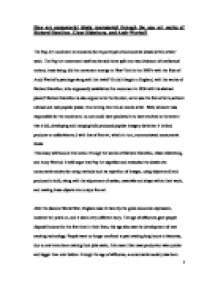 How are consumerist ideals represented through the pop art works of Richard Hamilton, Claes Oldenburg, and Andy Warhol?

How are consumerist ideals represented through the pop art works of Richard Hamilton, Claes Oldenburg, and Andy Warhol? The Pop Art movement is renowned for its portrayal of consumerist ideals within artists' work. The Pop Art movement itself can be said to be split into two divisions of intellectual notions, these being: did the movement emerge in New York in the 1960's with the likes of Andy Warhol's paintings along with his rivals? Or did it begin in England, with the works of Richard Hamilton, who supposedly established the movement in 1956 with his abstract pieces? Richard Hamilton is also argued to be the founder, as he was the first artist to achieve a broad and vast popular praise, thus turning him into an iconic artist. Well, whoever was responsible for the movement, no one could have predicted it to have evolved to the extent that it did, developing and merging bulk produced popular imagery (whether it is food products or celebrities etc.) with that of fine art, which in turn, communicated consumerist ideals. This essay will look at this notion through the works of Richard Hamilton, Claes Oldenburg, and Andy Warhol. It will argue that Pop Art signified and embodied the ideals of a consumerist society by using methods such as repetition of images, using objects sold and produced in bulk, along with the adjustment of scales, materials and shape within their work, and making these objects into unique fine art. ...read more.

7 Art historian Klaus Honnef claims that "Oldenburg reproduced mass-produced consumer products in papier-m�ch� and other absurd materials, rendering them useless for any meaningful purpose, or blew them up to such a monstrous scale and they exploded the familiar context and seemed to rock the foundations of civilization itself", this shows that through the manipulation of the size and materials, the sculpture becomes a testimonial to consumerist ideals within a consumerist society. Honnef then continues, "His [Oldenburg] art was shot through with fine irony and a covert love of anarchy. Only in the commercial cinema of an Alfred Hitchcock does the insurrection of objects take on a similar frightening aspect." This is particularly apparent in the frightening scale of the sculptor, yet it is the size enhances the objects significance. The sculptor is similar to that of Hamilton's collage, as it encompasses consumerist ideals such as wealth and beauty. This is less obvious than Hamilton portrays; the wealth aspect of the plug comes from the materials it was constructed in, an exotic wood, more importantly, an expensive wood. The beauty of the object, again similar to Hamilton, comes from the skill of taking an object that is mass produced in thousands or in Hamilton's case magazines, and turning into a bespoke, unique piece by removing its use, whether this is done from extraction, size, or different materials. ...read more.

cola, everyone- class, gender, race aside, was connected, in that, cola was cola, and not matter how much money purchased for, society would ultimately be receiving exactly the same thing: "What's great about this country is that America started the tradition where the richest consumers buy essentially the same things as the poorest. You can be watching TV and see Coca-Cola, and you know that the President drinks Coke, Liz Taylor drinks Coke, and just think, you can drink Coke, too. A Coke is a Coke and no amount of money can get you a better Coke than the one the bum on the corner is drinking. All the Cokes are the same and all the Cokes are good. Liz Taylor knows it, the President knows it, the bum knows it, and you know it."20 To conclude, Pop Artists Hamilton and Oldenburg have used everyday massed produced objects to produce individual, unique pieces of art work. Through using mass commodities and removing their use, whether it is by removing pictures from magazine, or replicating the object with different materials and a different scale, they have portrayed consumerist ideals throughout their work. Andy Warhol has also successfully done this, but has used other methods such as the repetition of images, and mass producing the art itself, which fittingly represents a consumerist society and their fixations upon beauty, technology, celebrities and affluence within the modern age. ...read more.