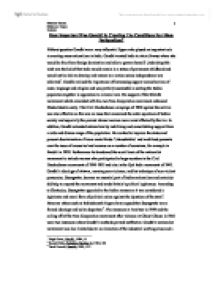 How Important Was Gandhi In Creating The Conditions For Mass Nationalism?

How Important Was Gandhi In Creating The Conditions For Mass Nationalism? Without question Gandhi was a very influential figure who played an important role in creating mass nationalism in India. Gandhi wanted India to attain Swaraj where she would be free from foreign domination and able to govern herself. Underlying this wish was the belief that India would remain in a status of permanent childhood and would not be able to develop and mature as a nation unless independence was achieved1. Gandhi realised the importance of harnessing support across barriers of caste, language and religion and was partially successful in uniting the Indian population together in opposition to colonial rule. His support of the Khilafat movement which coincided with his own Non-Cooperation movement enhanced Hindu-Muslim unity. The Civil Disobedience campaign of 1930 against the salt tax was also effective as this was an issue that concerned the entire spectrum of Indian society and especially the poorest whose incomes were worst affected by the tax. In addition, Gandhi extended nationalism by mobilising and consolidating support from a wide and diverse range of the population. He worked to improve the status and prevent discrimination of lower caste Hindu 'Untouchables' and mobilised peasants over the issue of excessive land revenue on a number of occasions, for example in Bardoli in 1928. ...read more.

Gandhi also encouraged hand-spinning as he called for a boycott of imported foreign cloth. David Arnold argues that although non-cooperation did take place in several different forms with thousands imprisoned, enthusiasm waned from region to region, and the movement failed its main objective which was to gain popular support and to prevent the provincial governments from operating8. By supporting the Khilafat movement Gandhi had cleverly broadened the nationalist movement and strengthened opposition to the British. Indian Muslims were concerned about the fate of the spiritual head of Islam, the Sultan of Turkey, and Muslim sovereignty of the holy places, Jazirat-ul-Arab, following Turkey's defeat in the First World War9. The Khilafat movement provided Gandhi with the perfect opportunity to launch his own Non-Cooperation movement and enabled him to make allies with a number of influential Indian Muslim nationalists such as Mohamed and Shaukat Ali, improving Hindu-Muslim relations. Gandhi did achieve a degree of success in his Non-Cooperation campaign. The atrocities at Amritsar were denounced by high profile British figures such as Winston Churchill and General Dyer was dismissed from his position. Moreover widespread educational, political and economic boycotts throughout India and active involvement from the Muslims showed that Gandhi had awoken and united a large number of Indians. However despite this, the Treaty of Sevres following the war did see a dissolving of the Turkish Empire and although there was a rise in Muslim involvement in Indian nationalism, this was only temporary and quickly diminished afterwards. ...read more.

The signing of the Poona Pact in 1932 with the leader of the Untouchables B.R Ambedkar secured Hindu unity as the lower castes abandoned the idea of separate electorates in return for a large number of reserved seats. The Pact established Gandhi as a leader and defender of Hindu society and the Harijan campaign spread the message of nationalism down to the lowest and most oppressed sections of rural society13. However although mass nationalism had been produced under Gandhi's leadership, it is true that his campaigns focused around the peasantry who he saw as the heart of the Indian nation. The industrial classes were not as enthused and Gandhi's biggest failure was to embrace India's Muslims fully in his nationalism. Mohammad Ali Jinnah, the leader of the Muslim League, felt that the Indian Congress under Gandhi represented Hindu interests and alienated Muslims. Although Gandhi did achieve independence from British rule in 1947, this came as a day of great sadness for him due to the partition of Pakistan which involved huge communal violence and mass migration. The creation of Pakistan showed that Gandhi's nationalism was not truly mass based as India had to be divided to appease the Muslim demand, even though one third of the Muslim population did remain in India after partition. Despite his failure to incorporate the whole of the population, Gandhi was undoubtedly a pioneer in Indian nationalism who publicised and expanded the movement enormously. ...read more.