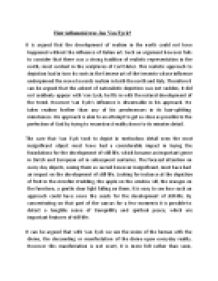 How influential was Jan Van Eyck?

﻿How influential was Jan Van Eyck? It is argued that the development of realism in the north could not have happened without the influence of Italian art. Such an argument however fails to consider that there was a strong tradition of realistic representation in the north; most evident in the sculptures of Carl Sluter. This realistic approach to depiction had in turn its roots in the Sienese art of the trecento whose influence underpinned the move towards realism in both the north and Italy. Therefore it can be argued that the advent of naturalistic depiction was not sudden, it did not suddenly appear with Van Eyck; he fits in with the natural development of the trend. However Van Eyck's influence is discernable in his approach. He takes realism further than any of his predecessors in its hair-splitting minuteness. His approach is akin to an attempt to get as close as possible to the perfection of God by trying to reconstruct reality down to its minutes detail. The care that Van Eyck took to depict in meticulous detail even the most insignificant object must have had a considerable impact in laying the foundations for the development of still-life, which became an important genre in Dutch and European art in subsequent centuries. The focused attention on every day objects, seeing them as sacred however insignificant, must have had an impact on the development of still-life. Looking for instance at the depiction of fruit in the Arnofini Wedding, the apple on the window sill, the oranges on the furniture, a gentle clear light falling on them. It is easy to see how such an approach could have sown the seeds for the development of still-life. ...read more.

He also focuses in detail on rendering the texture and attached jewels on St Lawrence?s vestment and the embroidery on the hanging cloth which inevitably invites parallels with Van Eyck. Van Eyck had a medieval outlook. He considered the whole of creation as a book of metaphors and symbols each representing various aspects of good and evil. What may appear to be a simple domestic interior is in fact an allegory with profound implications. In the Arnofini Marriage for instance we find the suggestive use of symbolism in the form of an orange on the window sill which in the context of what is being depicted takes on a whole new meaning. Therefore seeing symbols in everyday objects and using them as such could be considered as an important aspect of Van Eyck's influence. The minute realism that we find in Van Eyck, his compositions, and symbolism in the form of everyday objects are all for instance apparent in Rogier van der Weyden's 'Annunciation'. Likewise there is a clear affinity in terms of composition between 'St Luke Drawing a Portrait of the Virgin' and Van Eyck's ?Rolin Madonna?. Like in the ?Rolin Madonna? the figures are set in a logia and beyond the arches can be seen a town. With respect to the treatment of symbolism, composition, and realistic depiction of reality a parallel can also be drawn between Memling's 'Annunciation', the 'Arnofini Marriage', and ?Annunciation' from the workshop of Rogier van der Weyden. A similar treatment to Van Eyck?s with respect to symbolism and detailed rendering of reality can also be seen in the work of Robert Campion especially in the Werl Triptych. Consequently it can be argued that with respect to composition and the symbolic treatment of everyday objects there is a clear affinity that runs through early Flemish painting. ...read more.

It is possible to see Van Eyck?s influence as initiating an approach whereby the manifestation of the divine is conveyed in the perfect reconstruction of what is being depicted. Therefore although it is well enough to look for Van Eyck?s stylistic influence, which very probably was not significant it being likely that he was merely within, and responding to, stylistic trends; it could be more fruitful to consider his influence in terms of approach and attitude. For instance seeing divinity in all aspects of creation and striving towards a detailed depiction of every object however insignificant. Therefore it can be argued that Van Eyck?s influence is not easily discernable not because his influence was small but because it was subtle and did not fully manifest itself until the seventeenth century. It can therefore be argued that Van Eyck's stylistic influence was not significant, that in fact in this respect it was limited especially when considering that the more sentimental style of Rogier van der Weyden had a more pronounced influence on the generation following that of Van Eyck. Van Eyck's influence was more significant in respect of outlook and approach which consequently made it more profound and far-reaching. The composition of the Arnofini Wedding for instance was derived from medieval sculpture as was the life size representation of Adam and Eve and borrowing and lending features like convex mirrors can not amount to influence. Van Eyck?s influence must be seen in terms of execution of showing what is possible, as stimulation. Nor can it be argued that with Van Eyck we see the advent of seeing reality itself as sacred. This was a prevalent theological idea in the late middle ages. What is significant is how Van Eyck responded to it. Therefore it?s ultimately in the execution that Van Eyck?s influence lies in. ...read more.