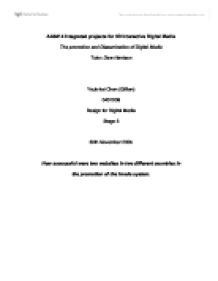 The promotion and Dissemination of Digital Media

How successful were two websites in two different countries in the promotion of the imode system.

How successful were two websites in two different countries in the promotion of the imode system.

The book “Web Design Garage” mentions an important idea about websites: The Good websites are not just nice looking, the structure will be linked well and make everything logical[1]. In this essay I will discuss two Imode websites, which are not in the same culture and country. One is used by O2, the British mobile company whose consortium recently imported the Imode system from Japan mobile company ‘NTT DoCoMo’. Far Eastone, the Taiwan mobile company, uses the other. I am going to contrast how successful were two websites in two different countries in the promotion of the imode system.

First of all, I will introduce the general information about the Imode system: when it started, which age group frequently uses it, how it works and why it is interesting.

“NTT DoCoMo's imode is a wireless internet service for imode mobile phones using HTTP, popular in Japan and also increasing in popularity elsewhere. It was inspired by the drawbacks of WAP being discussed at the time. A rough concept aimed for businessmen introduced to DoCoMo by McKinsey in 1997. After a 2-year period of developments at NTT DoCoMo, imode was launched as a mass-market product in Japan in February 22, 1999”[2].

In 2001 this company made a survey about the user group: Out of the 103,000 people who had a mobile phone, 43,000 users were using the imode system. Male possessed nearly 78%. There were four age groups: first group was 10-19 year old at 3%, second group was 20-29 year old at 35%, third group was 30-39 year old at 42% and the last group was over 40 year old at 20%[3]. The number of users of the imode system is still increasing in Japan. People can browse the Internet anytime anywhere which is really convenient. As of June 2005, imode has had 45 million customers in Japan and over 5 million in the rest of the world. Imode is being provided world-wide through DoCoMo's partners through a licensing scheme involving mobile operators in the following countries: Germany, the Netherlands, and Taiwan. United Kingdom, Singapore, Ireland and Russia have launched imode services on October 2005. The worldwide partnership is called the imode Alliance[4]. This figure gives an idea about which age group uses this service, which country has this system and which other companies around the world would like to import this service.

The history of the Internet is very short.  In 1994 Tim Berners-Lee published W3C; it was the beginning of the Internet. W3C means the World Wide Web consortium[5]. Since people use the Internet like a community tool and browse the website to search for information, encouraging the rise of commerce. Earl Shorris said: The Internet was indeed the Age of information, but information was not the precursor of knowledge; it was the tool of salesman[6].

In June 2002, Far Eastone was the second company in Asia to promote the imode system. These services included Internet banking, news information, entertainment, search portals (google) and the most popular ‘imode email’ of the five services available[7]. Customers might peruse websites anywhere and anytime. The main imode service within the Far Eastone website was very youthful, diversifying, lively and colorful (see Figure 1). It makes people feel welcome and encourages them to be interested in it and explains how it works (see Figure 2, 3) also shows which latest mobile phones can use this system (see Figure 4). Far Eastone has 7 hundred million users and owns 1/3 of the mobile market. In the market 57% are male and most people who look at this website are between 21 to 35, this age group accepts the high technology information very well. They are always using the latest products in various areas, for example, IPod (mp3), internet, DVD, digital camera and so on[8].

This website displays the details of this system: how to use it and the price of mobile phone. It teaches people how to use the phone step by step (see Figure 5). Consumers will understand how to use their mobile phone to browse the Internet through this page. The website button makes everything clear and what is it talking about. All customers are satisfied when they are able to find the information they want. The principal color of imode is yellow, which is the button color. If you had a business you want to import into this system, there is a page inside it, which tells you whom you can contact. Also when the user has questions on how to use the service there is another page call FAQ (Frequently Asked Questions) to point out the most problems that user might have.

Basically this website is easy to use, clear to understand and the simple label is not confuse people. But I think it would be good if the website designer put up another site or page for: “the opinion of users”, so whoever has used the service can talk about their experience with it and let others know if that service is what they are looking for or not. It also can improve their businesses service.

What is the future of mobile data services in the UK? This question has been on the minds of content and application developers for some years, but imode, arriving later this year, promises some optimistic answers. Imode is an important development for the UK because it solves three big problems associated with mobile data. Customers can access content in a similar way as they use a fixed-line Internet.

The combination of these benefits has created a powerful force in other countries, including Japan, where it originated. Imode has 42 million users accessing more than 80,000 sites, and 12 operators offer imode in Europe. The upshot of all this is that users are spending more time and money using imode than any other comparable form of data.

So, with an opportunity to make serious money and engage a new generation of customers, the potential for developer involvement and innovation is huge - a real step forward for mobile data services in the UK[9]. In imode business strategy forums, it shows the imode growth in UK in 2005 is nearly 14.2 million, although it only started in July 2005[10]. It really is amazing.

The O2 imode website has a general style, there is menu bar on the left hand side of the window (see Figure 6). This structure makes consumers easily find the things they are looking for, but the business attract clients aged over 20, who follow fashion, 3C (Computer, Communication and Consumer Electronic) goods and the latest products. The website is uninteresting. The page that promotes the cell phones with imode is inflexible as well (see Figure 7), because there is no animation. However the demo pages are quite fascinating, because the Flash trailer and demonstration film makes shoppers attentive, makes them curious and want to use it (see Figure 8, 9, 10, 11, 12). The page ‘see imode’ uses real phone images to show buyers how imode is humorous (see Figure 13). In my opinion, if the O2 website designer uses the Taiwanese and Japanese imode websites as references (see Figure 14, 15) it would make their website more humorous. It will be much more eye catching to shoppers. It was really hard to find out the age and the gender group who use the imode in the O2 service, because this service just started about 2 mouths ago.

I met other students who gave me many opinions about these two websites. They all like the Taiwanese version, because it felt friendlier, charming and fashionable. The other website felt too business like, less informative and not as funny. However O2 did a great job through the demo of using imode, it used different mobile phones for each demo so buyers can feel excited.

In conclusion, in the mid 1990s, cyberspace became celebrated in daily newspapers and television spots, and the tenth edition of Merriam-Webster’s Collegiate Dictionary confidently defined it as “the on-line world of computer networks”[11]. In the 21st century the Internet became one of main tools of advertisements, some companies made their websites very unique to show how different they are. They also put all their researches and information in them and built contact links to let their buyers get in touch with them anytime. It is really important “if you want to have a great business, make your websites nicer”.

The Taiwanese imode website really made a successful promotion to sell the imode service by using a website with that design, structure, style and using demos as references. This website really helps the company improve their business, because each day the number of guests browsing it increases. 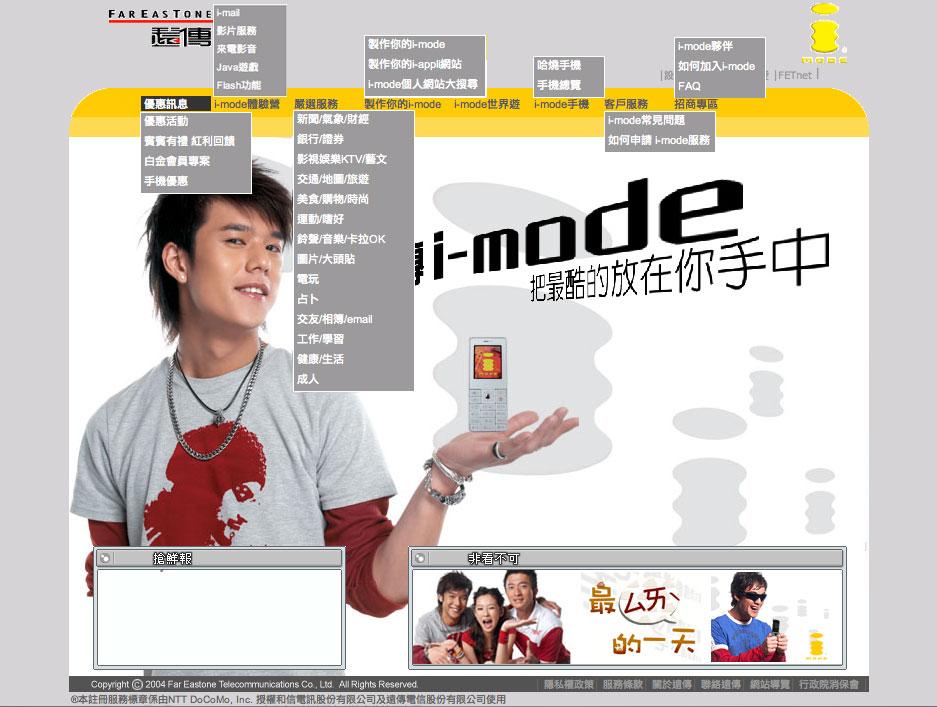 The show page of imode service of Far Eastoen, 2002 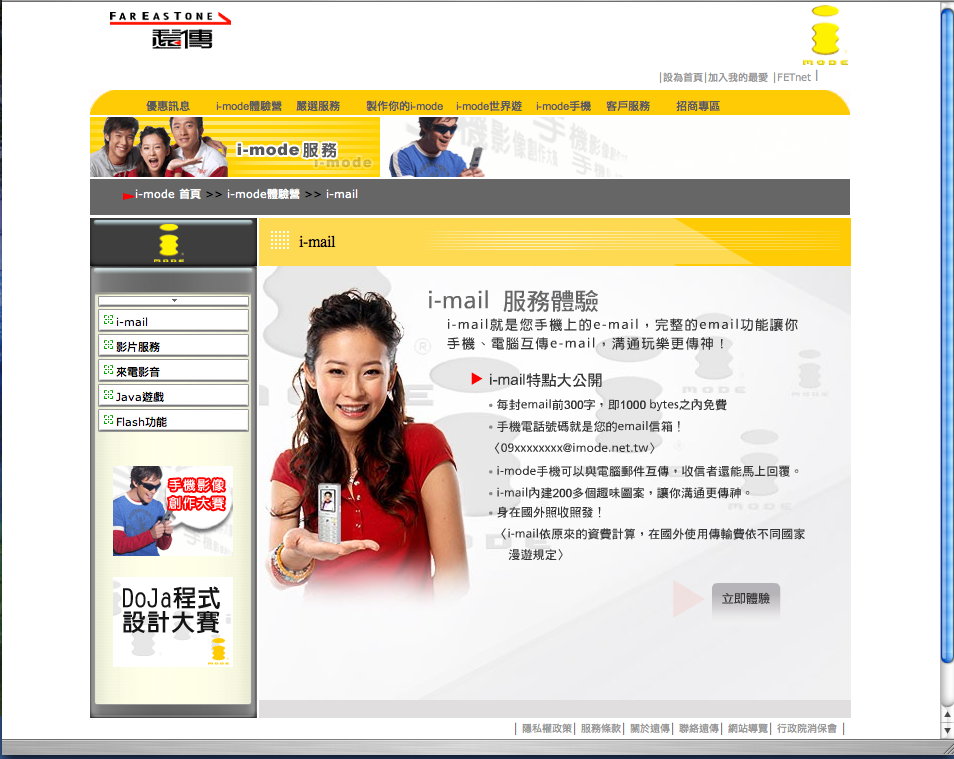 The show page of using imode system of Far Eastoen, 2002 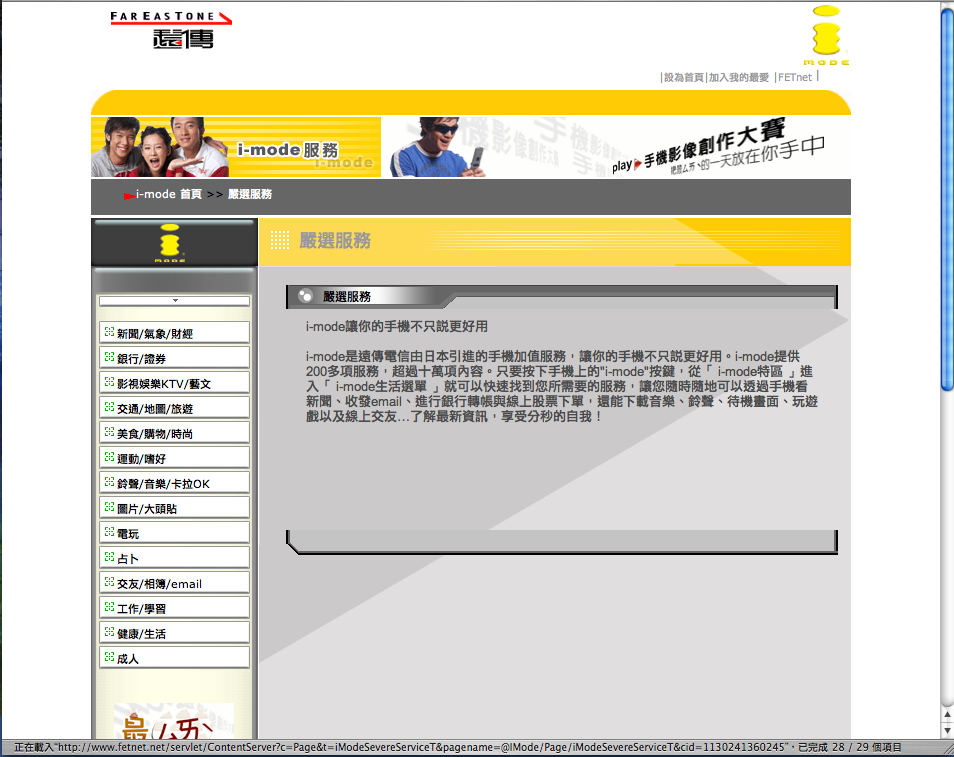 The phone information and price page of Far Eastoen, 2002 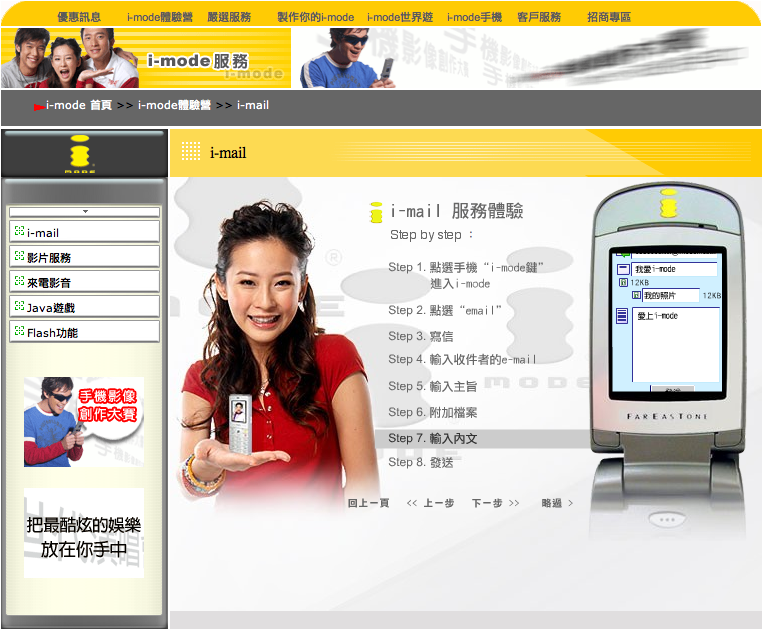 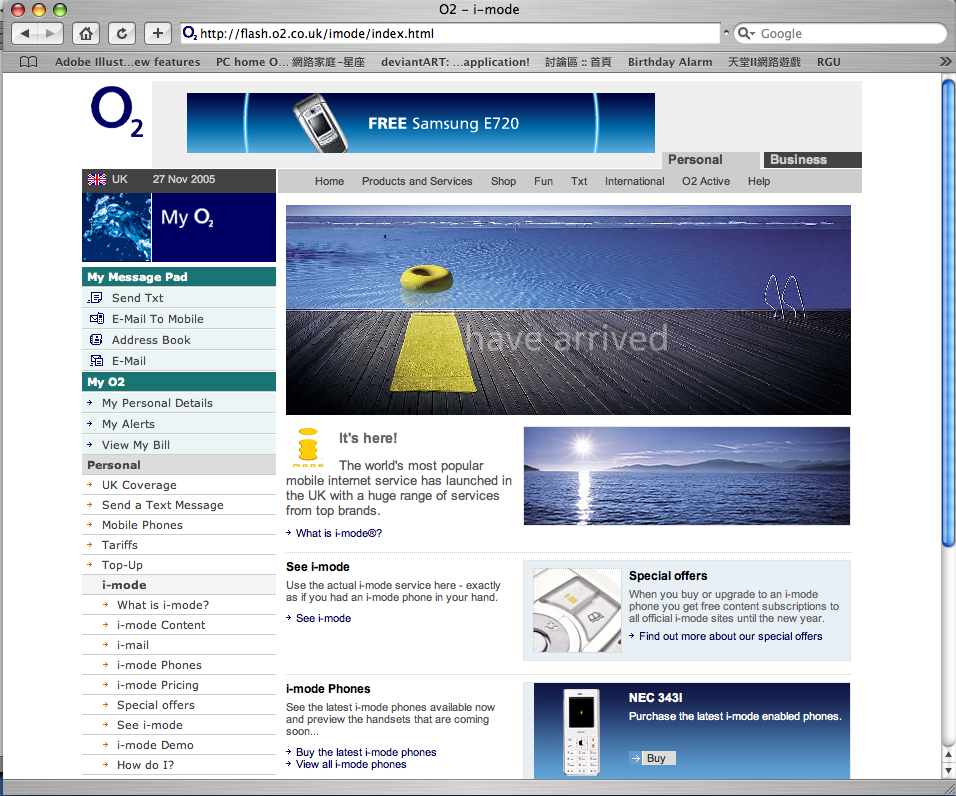 The imode phone information and price page of O2, 2005 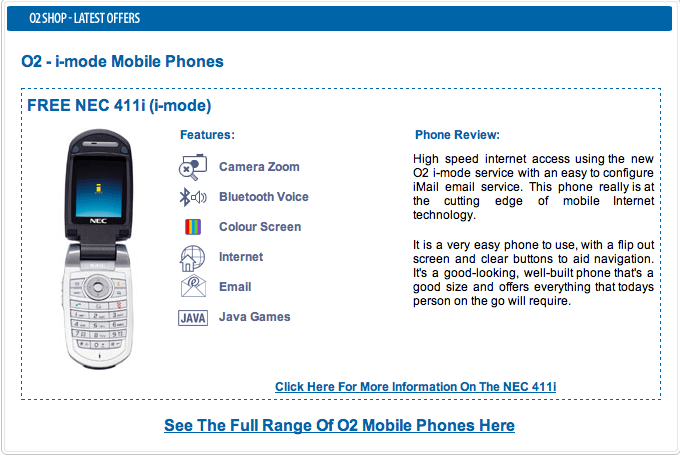 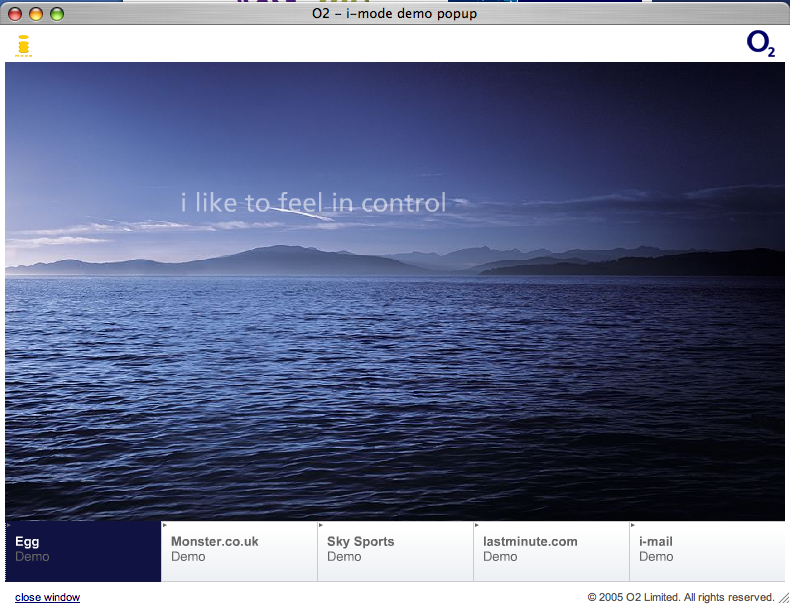 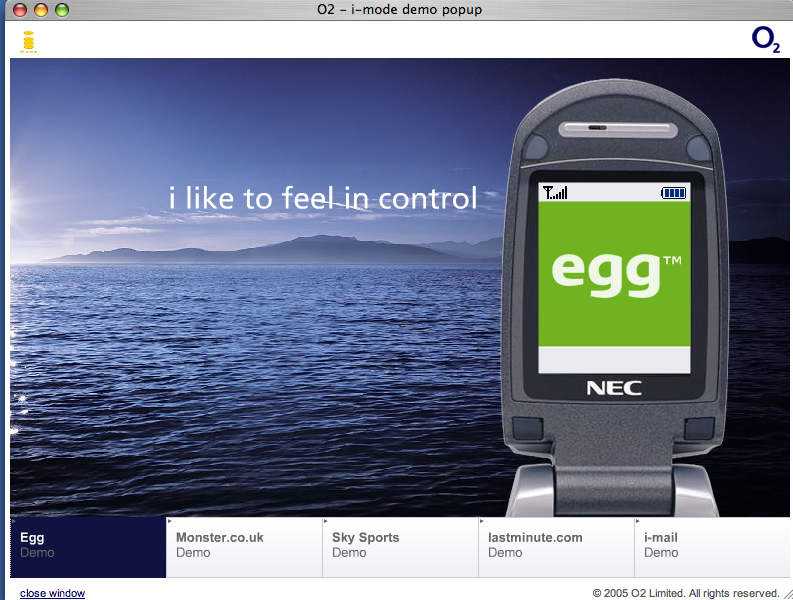 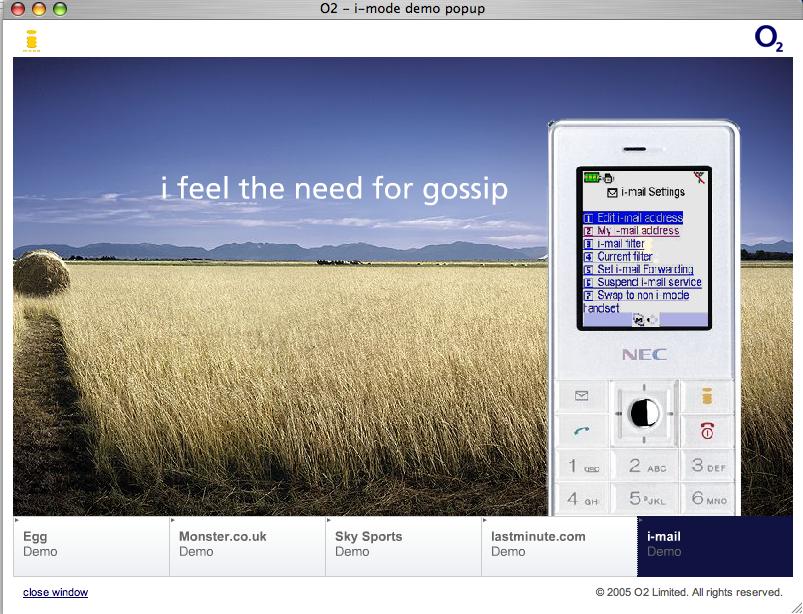 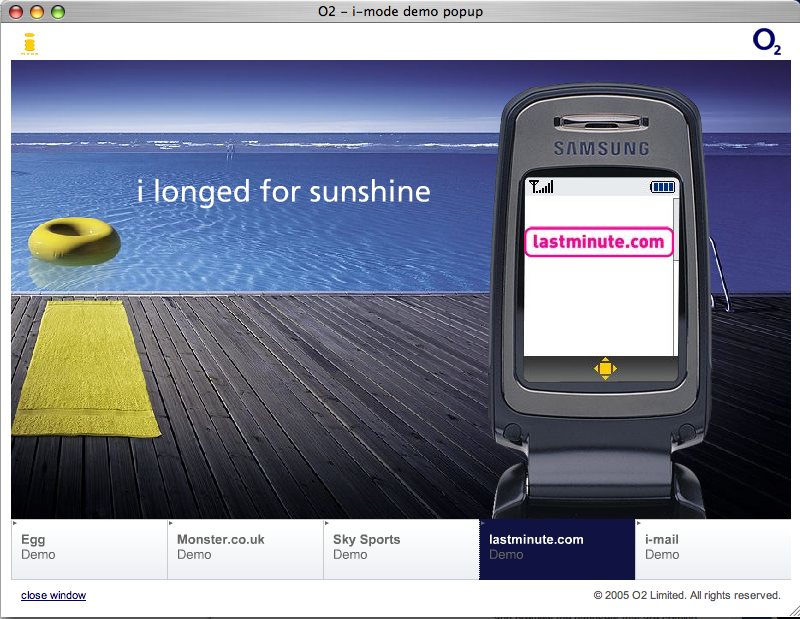 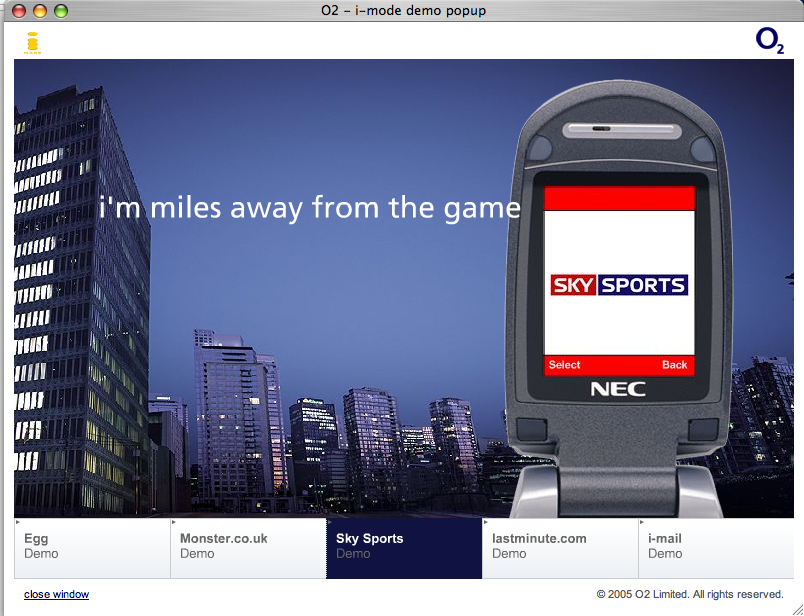 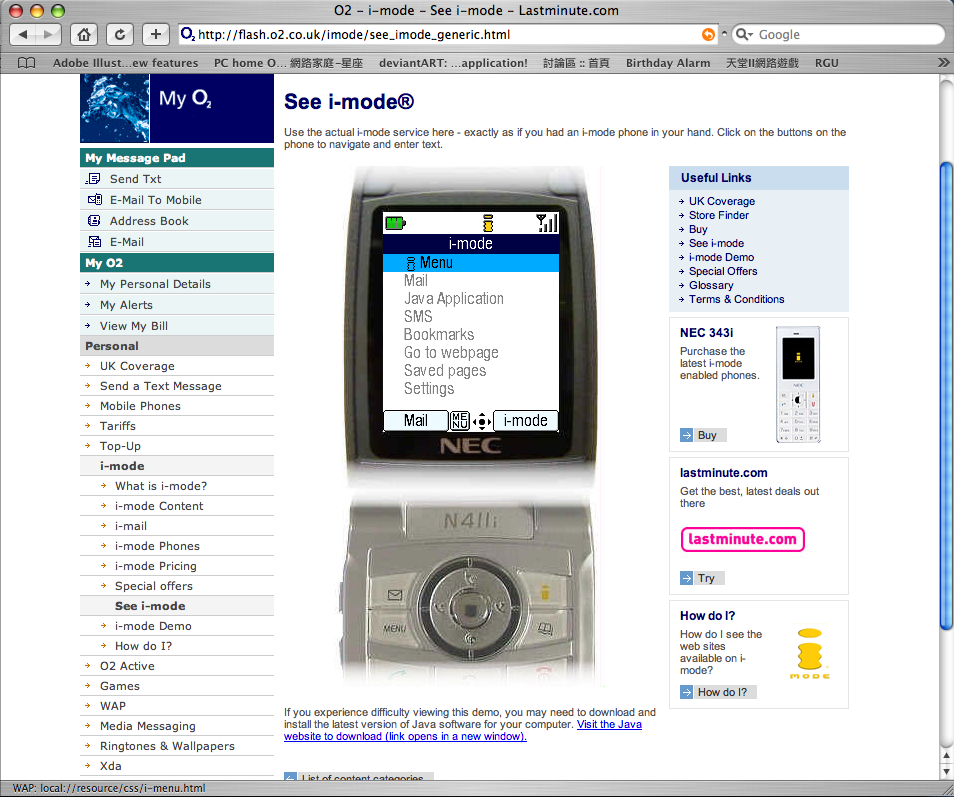 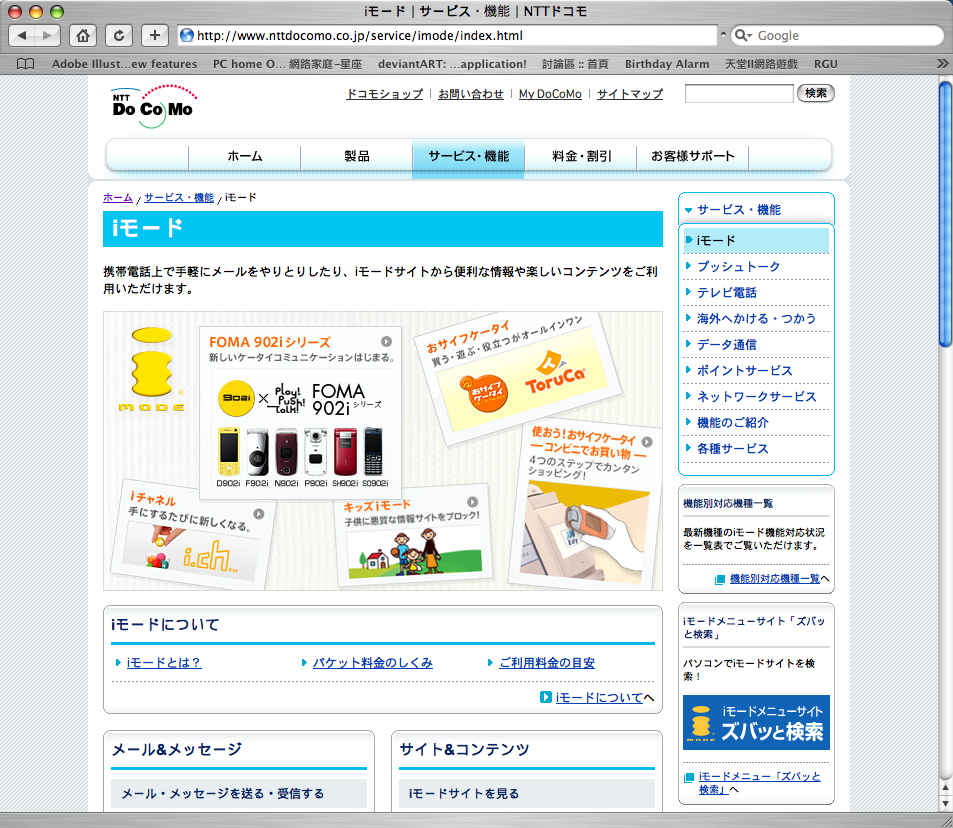 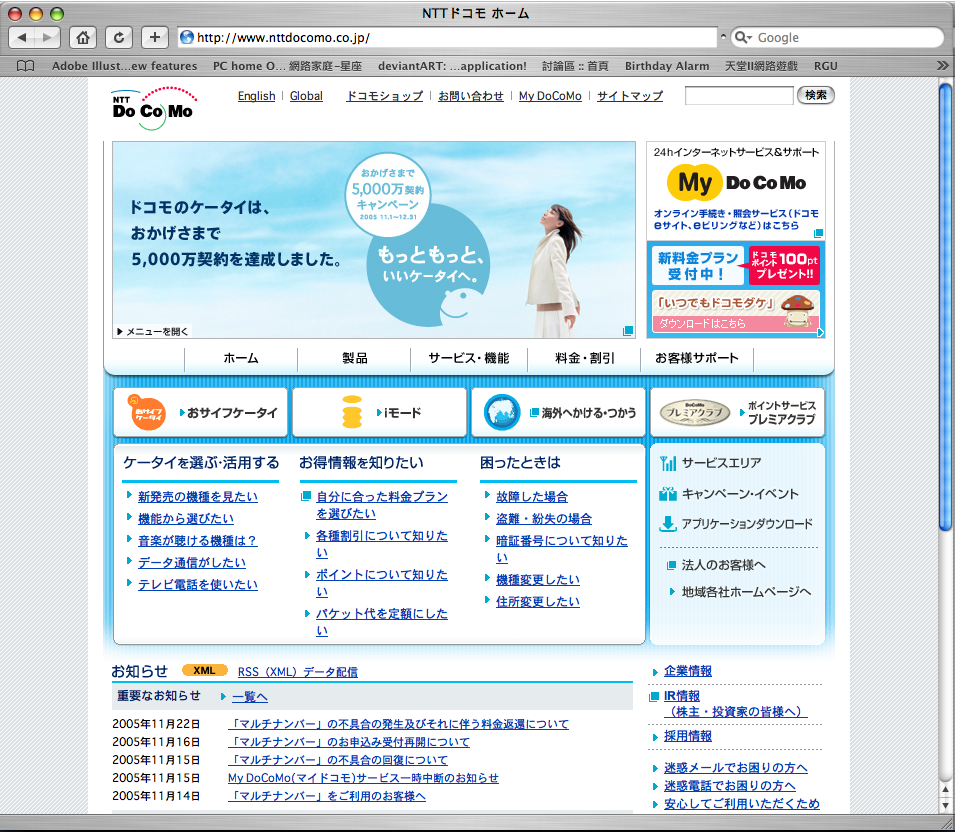 [9]I-mode promises to revolutionise mobile services in the UK, i-mode I, Oct 2005, http://www.i-mode-i.co.uk/o2-i-mode-promises-to-revolutionise-mobile-services-in-the-uk/#more-56