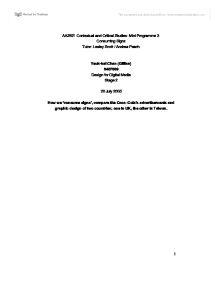 How we consume signs, compare the Coca-Colas advertisements and graphic design of two countries; one is UK, the other is Taiwan

After fruit juice, they also produced tea, ion supply drink and water, making the Coca-Cola Company become a multiple soft drink factory in Taiwan (see figure 1). The Coca-Cola Company made their product similar around the world but there were still variations between countries. For instants, in Taiwan the packaging of bottle uses red and yellow as main colours. This is because Taiwan people believe that red is a very happy colour that could bring bliss, while yellow was the only colour to be used by the king in ancient periods, and also is similar the colour of gold (see figure 2). The bottle is slightly bit plump, the reason being people live in Taiwan think chubbiness is good fortune (see figure 3). 'Coca-Cola' first arrived in Great Britain in 1900 when Charles Candler, son of Asa Candler, then owner of The Coca-Cola Company brought a jug of syrup with him on a visit to London, England. It was first sold in Great Britain on 31st August 1900 and went on regular sales through soda fountain outlets, which included Selfridges and The London Coliseum. In the last few years the number of brands within their product range has increased. ...read more.

"Saussure believed that language is made up of signs (like words) which communicate meanings, and that all kinds of other things which communicate meanings could potentially be studied in the same way as linguistic signs."6 In Taipei there was a big Coke advertisement on the street few years ago. The advertisement was the same height as a building, with a man using a straw drinking the new vanilla Coke. The man is very happy, and there were many spotlights around him (see figure 8 and 9). In that advertisement there was no used word but it took people's vision. In conclusion, "Gestures, dress codes, traffic signs, advertising images, newspaper, television programmes and so on are all kinds of media which use visual signs" as stated in Media Semiotics.7 From the cases study of both the UK and Taiwan, even insight the drinks settle are the same, the Coca-Cola company can make different advertisements, signs, slogans for each country sassed on their different social custom, religion and living habits. Following those rules all companies can create interesting signs to attract consumer's eyes and make their goods become well-liked. Illustrations Fig.1 Fig. 2 Fig. 3 Fig. 4 Fig. 5 Fig. 6 Fig.7 Leicester Square 2004 Fig. 8 Fig. ...read more.