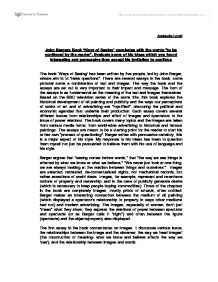 John Bergers Book 'Ways of Seeing' concludes with the words &quot;to be continued by the reader&quot;. Evaluate some of his ideas which you found interesting and persuasive then accept his invitation to continue

Agnieszka Lovell John Bergers Book 'Ways of Seeing' concludes with the words "to be continued by the reader". Evaluate some of his ideas which you found interesting and persuasive then accept his invitation to continue The book 'Ways of Seeing' has been written by five people, led by John Berger, whose aim is to "raise questions". There are several essays in the book, some pictorial some a combination of text and images. The way the book and the essays are set out is very important to their impact and message. The form of the essays is as fundamental as the meaning of the text and images themselves. Based on the BBC television series of the same title, this book explores the historical development of oil painting and publicity and the ways our perceptions of works of art and of advertising are "mystified", obscuring the political and economic agendas that underlie their production. Each essay covers several different issues from relationships and effect of images and spectators to the issue of power relations. The book covers many topics and the images are taken from various media forms, from world-wide advertising to historical and famous paintings. The essays are meant to be a starting point for the reader to start his or her own "process of questioning". Berger writes with persuasive certainty, this is a major aspect of his style. My response to his ideas has been to question them myself not just be persuaded to believe them with his use of language and his style. ...read more.

However, this is Hals view of them, as at the time, he was poor and he disliked them due to their wealth. This changes our view. This shows how we are swayed in our views by the views we are presented with. This is another immense part of Bergers style. Throughout the essays, Berger often writes about the past. He often presents the past or images from the past as examples. This may be because he feels the past is relevant to the present and the ideas he discusses can easily be viewed with past, rather then present examples. Another major part of his style is his use of short bold statements, in which he sounds certain, and his ideas sound plausible. He then "illustrates" this with the use of several sources, photographs, paintings and text. Berger then touches on the issue of value. He claims that how much an image, in this case painting, is 'worth' depends on the market value placed upon it by high brow intellectuals and art critics who have, or have not critically acclaimed it. People take on this view believing it is correct. However each person would have their own opinion and place their own value on a certain image. I agree with Berges point that we should not take on the opinions of the critics. Essay 3 examines the place of the (female) nude in oil painting and contemporary publicity photos. Berger remarks that the imagined gaze of the spectator is always male, and that consequently, a female spectator is "almost continually accompanied by her own image of herself", thereby causing a split in her perception of herself: an idea of herself, shadowed by an idea of herself as a social construct of patriarchy. ...read more.

For example, the use of cannons in image 4 with the woman would appeal to most men, as they would be associated with the 'macho man'. While image, 5 and 6 would appeal due to the way the woman has been portrayed, as a sex object. This shows that all images are a construction. It is clear from all the images that the women have a presence. By how they appear we can see "what can and cannot be done to her", as Berger says in essay 3. The first 3 images, from womens magazines show they are there to be looked at in order to sell the advertised product. They are supposed to be considered beautiful naturally and not be considered sexy, as that would be threatening. The images from the male magazines are to be seen as sexy. They are supposed to attract the male. It is clear that the women are inviting the readers to do a lot more to them than the images from the womens magazines. As Berger says the "women appear" in various ways. The images also illustrate Bergers ideas on glamour and publicity expressed in essay 7. Bergers ideas in the book have affected the way I look at images. Probably the most prominent idea I have taken on board is how words can change our view of something. I agree with this and often consider how I would view something without the associated text. Many other ideas were very interesting. 'Ways of Seeing' provides a set of questions, ways of thinking about the place of images and the ideas behind them. ...read more.