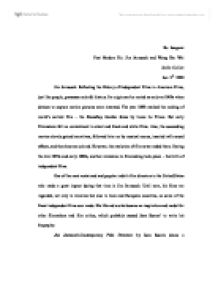 Ko Iwagami Post Modern Dir: Jim Jarmusch and Wong Kar Wai Joelle Collier Jun 3rd 2008 Jim Jarmusch: Reflecting the History of Independent Films in American Films, just like people, possesses colorful history. Its origin can be rooted as early as 1960s when devices to capture motion pictures were invented. The year 1888 marked the making of world's earliest film - the Roundhay Garden Scene by Louis Le Prince. But early filmmakers felt no contentment in silent and black and white films. Also, the succeeding movies slowly gained narratives, followed later on by musical scores, inserted with sound effects, and then became colored. However, the evolution of film never ended there. During the late 1970s and early 1980s, another milestone in filmmaking took place - the birth of independent films. One of the most acclaimed and popular indie's film directors in the United States who made a great impact during that time is Jim Jarmusch. Until now, his films are regarded, not only in America but also in Asia and European countries, as some of the finest independent films ever made. ...read more.

Akron/The Cinematheque/Lightning Over Water This section discusses about the early life and works of Jim Jarmusch, as well as his early influences. The keywords - Akron, The Cinematheque, and Lighting over Water - all played a vital role in his life. Jarmusch was born in Akron, Ohio in 1953, which by then is an important industrial point. Here, he was immensely exposed to rock n' roll, radio DJ's and cars that eventually became appeared in his films. After studying college in Columbia, he went to Paris where he was exposed to Henri Langlois, founder of the art gallery Cinematheque. Longlois was also one of Jarmusch's influences and who was known for his participation in the French New Wave. When he went back, Jarmusch enrolled at New York University where he was appointed as a student assistant to Nicholas Ray. With this, jarmusch was exposed in Ray's ongoing film, Lightning Over Water. Right after this, Jarmusch made his first film, Permanent Vocation. His early influences were reflected in this particular work - "classical American cinema, European art, and downtown experimental culture" (Suarez, P.9) ...read more.

The movie explores the life of Allie the tourist on a permanent vacation. The story was told in first person point-of-view. Allie was recounting his remaining days in New York before leaving for Paris. Here, he narrated his intentions for his girlfriend Leila, visited his mother Ruth who is in psychiatric hospital, met several friends and acquaintances, and also stole a car. This movie is said to be an early manifestation of Jarmusch's navigation towards magic realism that will be evident in his future films, infusing fantasies and dreamlike features in the story. For example, Allie first speech was: "I can't get any sleep... I have my dreams while I am awake." (Suarez, P.22). This statement clearly shows the blurring of reality and dreams. Even the music used in this particular film was somehow eerie and creepy, composed mainly of Javanese gamelan music. In addition, most scenes were static takes and focused on minimalistic details. This style presented in the Permanent Vacation is truly characterized by Jarmusch's unique way of blending minimalism, stories of outsiders, downtown themes, and "stylized narratives that subtly blend the real and the unreal" (Suarez, P.27). ...read more.