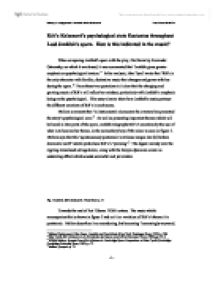 Kt(TM)a Kabanov(TM)s psychological state fluctuates throughout Leo Janek(TM)s opera. How is this indicated in the music?

K�t'a Kabanov�'s psychological state fluctuates throughout Leo� Jan�cek's opera. How is this indicated in the music? When comparing Jan�cek's opera with the play, The Storm by Alexander Ostrovsky, on which it was based, it was commented that 'Jan�cek gives greater emphasis on psychological tension.'1 In his analysis, John Tyrell wrote that 'K�t'a is the only character with flexible, distinctive music that changes and grows with her during the opera.'2 From these two quotations is it clear that the changing and growing music of K�t'a will reflect her mindset, particularly with Jan�cek's emphasis being on the psychological. This essay aims to show how Jan�cek's music portrays the different emotions of K�t'a in each scene. Mellers comments that 'in instrumental microcosm the overture has presented the story's psychological core.'3 As well as presenting important themes which will be heard in later parts of the opera, Jan�cek telegraphs K�t'a's emotions by the use of what is to become her theme, in the melancholy key of Db minor as seen in figure 1. Mellers says that this 'spontaneously pentatonic loveliness merges into [a] broken chromatic motif' which symbolises K�t'a's 'yearning'.4 The legato melody over the rippling tremolando strings below, along with the hairpin dynamics create an undulating effect which sounds sorrowful and yet sinister. ...read more.

The indecision is heightened by the fact the music 'oscillates [...] between major and minor' and the dark, almost menacing sound of the trombone highlights that K�t'a's actions will have dire results and that deep down in her psyche she knows this herself.10 Fig. 7 Jan�cek, K�t'a Kabanov�. Vocal Score p. 85 Scene 2 of act 2 opens with a 'tense six-note fragment, ending in a diminished third' as shown in figure 8.11 The rising and falling of these six notes 'express K�t'a's agonized indecision' very well and her indecision is further heightened by the addition of contrasting lyrical passages such as figure 9.12 The lyrical passages are similar to the love theme and their juxtaposition with the tense music highlights K�t'a's mental state. She is resolved to the fact that this love for Boris is in complete control of her and she will soon meet him and consummate their love, regardless of the grim ramifications. The use of the key of Gb Major here indicates this feeling of resolve as it is a key used by Jan�cek to show resolution. Fig. 8 Jan�cek, K�t'a Kabanov�. Vocal Score p. ...read more.

beautiful moment, in the "resolution" key of Gb to which they then embrace, highlighting the finality of this embrace in K�t'a's mind. Fig. 16 Jan�cek, K�t'a Kabanov�. Vocal Score p. 142 Fig. 17 Jan�cek, K�t'a Kabanov�. Vocal Score p. 151 As K�t'a laments her fate, realising that to achieve peace she must die, her music 'droops in whole-tone instability.'22 The whole-tone scale was often used to signify death and when K�t'a finally leaps into the water a tremolando on the notes of the whole tone scale gradually increases in volume as shown in figure 18. This represents not only the torment enveloping K�t'a's mind but also the waters of the Volga enveloping her body and killing her. Fig. 18 Jan�cek, K�t'a Kabanov�. Vocal Score p. 161 Tyrell's comment quoted at the start of this essay has been proven true. As her story unfolds and her mental state and her world crumble around her, K�t'a's music changes to reflect this, as illustrated in the many examples given above. Jan�cek's music only serves to heighten the emotion, drama and psychological tension of the original play. In his synopsis, which has been referenced throughout this essay, Mellers' sums it up excellently: 'as always with Jan�cek, psychic tension finds corporeal outlet. ...read more.