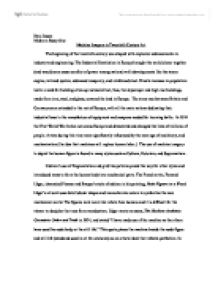 Dani Jessee Midterm Essay One Machine Imagery in Twentieth Century Art The beginning of the twentieth century was shaped with explosive advancements in industry and engineering. The Industrial Revolution in Europe brought the world closer together (and would soon cause conflict of power among nations) with developments like the steam engine, railroad system, advanced weaponry, and reinforced steel. Drastic increase in population led to a need for building cities up instead of out; thus, the skyscraper and high rise buildings, made from iron, steel, and glass, covered the land in Europe. The arms race between Britain and Germany soon extended to the rest of Europe, with all the main nations dedicating their industrial base to the manufacture of equipment and weapons needed for looming battle. In 1914 the First World War broke out across Europe and devastated and changed the lives of millions of people. ...read more.

This quote places the machine beside the nude figure and still life (standards used in art for centuries) as an artistic ideal that reflects perfection. In 1912, Marcel Duchamp created a piece known as Nude Descending a Staircase. Duchamp was captivated by early cinematic art and the movement of the body in chronographs by Etienne-Jules Marcy. Although his work departs from cubism, it still contains the style's use of reductive palette and uses brown, tan, and black colors. The mechanized figure in the painting has been broken down into separate parts and multiplied to mimic staccato movement. Both of these paintings use cubist elements to create the human figure in a mechanical and robotic motion. The Futurist style in Italy used cubism elements to showcase political views and goals of revolution. ...read more.

Lastly, the Russian artist, Kazimir Malevich, uses cubist geometry to create his Morning in the Village after a Snowstorm in 1912. The cylindrical robotic figures of the townspeople walk through a mechanized landscape of snow that is formed in hard edged lines. The colors, red, blue, and gray give the painting a cold metallic feeling and the shape of the figures remind the viewers of a man made from tin. The depiction of human figure as machine-like and robotic in motion is a reoccurring theme throughout pictures and sculptures at the beginning of the 1900s. With the new age of industry came a new view of the world and its inhabitants. A fear of machines taking the place of human and animal labor formed along with the concept of beauty found within the speed and dynamism of machinery and technology. All of these ideas were materialized in the art of the early twentieth century through cubism and other styles. ...read more.