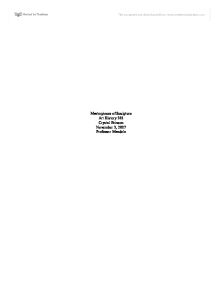 Masterpieces of Sculpture Art History 381 Crystal Brinson November 3, 2007 Professor Mandola Art has continued to be redefined throughout the centuries. Its human works, an expression, a craft, collaborated or unconnected sounds, paintings, sculptures all of these and more can be defined as art. Modern art or art as we know it today has been a constant cycle of art movements over thousands of years. Recent movements, over the last fifty years, and the artists that represent these times seem to be determined to add and change perspectives, breaking traditional views and each on breaking more boundaries than the last. Therefore art's becoming more real grabbing the spectators demanding them to become a part of the piece. Among these movements installation art formed, in addition different mixtures emerged including the Happenings, Performance Art, and Interactive Art. All of these are combined and blurred together in some aspects, but are slightly diverse in characteristics. Installation art grew from works starting during the sixties, made with any type of media and/or different sculpting materials. It's generally a contemporary style created to make an experience in a particular space consisting of ordinary everyday places, which can be public or private. Installation art broke the boundaries of four walls, confined places, particularly in reference to the ones in typical art galleries where art was traditional viewed. (Installation Art, 2007) George Trakas an artist associated with early installation art states, "In my work I wanted to confront the spectators directly and draw them in physically to discover space with their bodies."(Reiss, 1999) ...read more.

Modern interactive art usually involves a computer and it's graphics. (Interactive Art, 2005) An early invitation of interactive art came from the artisit Marcel Duchamp with his 'readymade' piece the Bicycle Wheel. Readymade pieces are from common parts taken from common items and put together, making one piece or several pieces of art. "In order to create a new art- one engages the mind instead of the eye, in ways to provoke the observe to participate and think." (Stafford,2006) This piece breaks bounaries, involves and is constructed with common items, it invites and challenges the spectator to spin the wheel. If they chose to do so they become interactive with the piece...a step toward art becoming more like life. The Happenings occurred in during the late fifties and early sixties, famous among others is the works created by Allan Kaprow, who fabricated the phrase the happenings. (Happening, 2007) Happenings are performances, events or situations that take place anywhere at anytime usually involving the audience, it also entailed "...none of the usual trappings of theatre -- plot, dialogue, character, or professional performers -- and no resemblance to the traditional visual arts" (Marks, 2006) Most of the key elements, such as the setting was planned, but there wasn't much narrative and there was plenty of improvising occurring. Allan Kaprow studied under John Cage at the New School for Social Research in Manhattan between 1956 and 1958. ...read more.

The artists try to reveal, to the spectators, within their art work that everyday activities can be viewed in an artistic manner. (Performance Art 2007: Byrd 1998) These art forms where created by artist who meant to blur the lines between performer and audience, performance and reality, life and art. They and their pieces left spectators questioning what is art. Traditional boundaries were broken and modern art is always growing, changings and being re-invented by different artists who continue the quest to disslove the lines between reality and art, searching for a place where the two become one in a flowing yet blanced enviroment. Modern art has truly has blurred the lines between art and life. Where does art stop and life begin, this seems to be the question most recent artists want the spectators to ask themselves. The artists try to dissolve those lines and show their spectator's that art is incorporated into everyday lives, it's everywhere. They emphasize that art is in everyday objects, processes, situations and every day these same things that are consider art are part of life and life in general is art. Future art maybe a cycle back to traditional art or keep dissolving boundaries until it's simply life. The only things distinguishing between the two would be breath, thought, a heartbeat, and blood pumping through ones veins or maybe that will be art too produced by the master creator. ...read more.