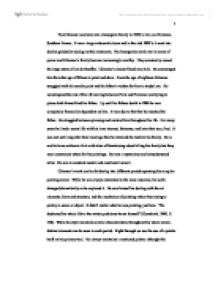 Paul C�zanne was born into a bourgeois family in 1939 in Aix-en-Provence, Southern France. It was a large aristocratic town and in the mid 1800's it went into decline gradually wiping out the aristocrats. The bourgeoisie took over in terms of power and C�zanne's family became increasingly wealthy. They eventually owned the large estate of Jas de Bouffon. C�zanne's closest friend was Zola. He encouraged him from the age of fifteen to paint and draw. From the age of eighteen C�zanne struggled with his need to paint and his father's wishes for him to study Law. He would spend the rest of his life moving between Paris and Provence and trying to please both himself and his father. Up until his fathers death in 1886 he was completely financially dependant on him. It was due to this that he resented his father. He struggled between pleasing and resisted him throughout his life. For many years he lived a secret life with his love interest, Hortense, and later their son, Paul. It was not until long after their marriage that he revealed the truth to his family. He is said to have written to Zola with tales of fanaticising about killing his family but they were convenient sitters for his paintings. ...read more.

He saw copying as an important form of discipline and inspiration (Webmuseum). What struck him the most about Delacroix was his romanticism and intensity in his use for colour. "He understood, respected, and made extensive use of the greatest masters of the past" (Eisenman, 1994, p. 390). He believed they had achieved harmony, balance and compositional perfection but now he wanted to achieve these things in a new way. While he exhibited with the impressionists in 1874 he had nothing in common with them. He was not influenced by their work as he saw it as too light and fluffy and not concerned with structure. However dealings with them caused him to "change from a Romantic rebel to a cultural revolutionary" (Eisenman, 1994, p. 390). He also used the "narrow tonal range and prismatic hues of impressionism as a means of capturing the effects of light and air and of disciplining his sometimes violent and disordered imagination" (Eisenman, 1994, p. 394). During his time at the Academy Suisse he met Pissarro who would later influence him more than anyone else. During the 1860's Courbet also influenced him. He applied paint crudely in layers like Courbet's work from Ornas. ...read more.

38). It is clear that he felt threatened by modernisation. In the 1880's he settled permanently in L'Estaque but it became more and more industrialised as time went on. His views of this modernised world are portrayed in a letter to his Godchild: "Unfortunately, what we call progress is nothing but the invasion of bipeds who do not rest until they have transformed everything into hideous quais with gas lamps - and, what is still worse - with electric illumination. What times we live in!" (Schmitt, 1995, P.77). C�zanne's career was a complex one however it's development can be clearly traced. He struggled to achieve what the painters of the Louvre had and it wasn't until his final years that he reached his goal. He took a journey on which his characteristics of painting changed due to his influences and the social context in which he was painting. He strove to do something new and that he did. He changed painting and is considered to be the father of modern art. This could not have been achieved without his passion, determination and ultimately his obsession with paint and painting. While working in the family bank he wrote in a ledger "I am wasting away, painting haunts me, the desire to pick up my brushes once again becomes more and more pressing" (BBC, 1995). ...read more.