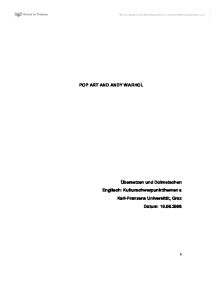 POP ART AND ANDY WARHOL �bersetzen und Dolmetschen Englisch: Kulturschwerpunktthemen a Karl-Franzens Universit�t, Graz Datum: 10.06.2008 TABLE OF CONTENTS AIM OF MY ESSAY 3 POP ART 4 SOME WORKS BY THE MOST FAMOUS BRITISH POP ARTISTS 6 ANDY WARHOL - "THE KING OF POP ART" 8 ANDY WARHOL`S PAINTINGS 10 MY PERSONAL OPINION ABOUT ANDY WARHOL 12 ANDY WARHOL`S FAMOUS QUOTATIONS 13 AIM OF MY ESSAY I first got to know about Andy Warhol and Pop Art at the same time, when I was about 15 years old and got a diary with Warhol`s pictures, as a present. I was amazed by the pictures and photos, which said so much about the nowadays society. When that year was over and so was the diary, I cut the pictures out and put them on a wall in my room. My absolute favourite at that time was a picture of two noses, a long, not really nice one and another, beautiful one. I have always thought it shows a woman before and after a plastic surgery operation. On one hand the picture is so simple, that you maybe wouldn`t even refer to it as art in the first place, but on the other, this simplicity in fact is that certain point that makes it so great and creative. I have to admit, I really tried hard but did not manage to find out, what the title was and whether my theory was right or not. On the internet I found this mentioned picture with the text "The Jewish Nose, The American Nose" under it. I do not know, if this is the original title but if so, it would, of course, give the picture a completely different meaning. But however, it still would be very up-to-date. And exactly that is what I like about pop art. Not only does it manage to connect our lives, our society with art, it also presents "everyday objects", the things which are so normal for us, in a special way. ...read more.

Warhol began to experiment with his newfound medium and began working in repetition. At first he started by using rubber stamps, but found that the results were 'too homemade' and wanted something more commercialistic. It was then that he coined his technique of "photosilkscreening" that brought his so much acclaim and fame. This is also the method that he used to create his popular Campbell's soup can and other images, beginning in 1962. In 1962, he founded an art studio called The Factory. It was an art studio that hired artists to mass produced everything from prints to shoes. In the 1960s, Andy began making bizarre experimental films. Responding to one of his critics he said: "Our movies may have looked like home movies, but then our home wasn't like anybody else's." From 1963 through 1968 Warhol shot hundreds of these home movies. They are "short and dauntingly long, silent and sound, scripted and improvised, often in black and white though also in colour, still as death and alive to its moment", as Manohla Dargis describes them in an article. Moreover she wrote: "Awkward, beautiful, raw, spellbinding, radical - they are films like few others, in part because, first and foremost, they are also sublime art." His first such films included "Sleep", "Empire", and "The Chelsea Girls". Then in 1965, he began travelling around the world with a musical group called The Velvet Underground. Warhol, with Paul Morrissey, acted as the band's manager. In 1966 he "produced" their first album The Velvet Underground and Nico, as well as providing its album art. His actual participation in the album's production amounted to simply paying for the studio time. After the band's first album, Warhol and band leader Lou Reed started to disagree more about the direction the band should take, and the contact between them faded. On June 3, 1968, a woman named Valerie Solanis, a rejected superstar, came into The Factory (Warhol`s studio) ...read more.

Andy Warhol was a person who did that and also wanted to drawl people`s attention to it. And although he can not spread his philosophy himself anymore, his works will keep doing this for him and will continue to reflect our changing times. ANDY WARHOL`S FAMOUS QUOTATIONS There are quite a few famous quotations listed below, but the most famous is the following one:"Everyone will be famous for 15 minutes." (Andy Warhol) It has produced a common clich� about fame in pop-culture which is called "15 minutes of fame". It refers to the fleeting condition of celebrity that attaches to an object of media attention, and then passes to some new object as soon as the public's attention span is exhausted. It is often used in reference to figures in the entertainment industry and other areas of popular culture. In 1979 Warhol reiterated his claim: "...my prediction from the sixties finally came true: In the future everyone will be famous for fifteen minutes." But then, becoming bored with continually being asked about this particular statement, Warhol deliberately tried to confuse interviewers by changing the statement variously to "In the future 15 people will be famous" and "In 15 minutes everybody will be famous." Some other Warhol`s quotations: "Isn't life a series of images that change as they repeat themselves?" (Andy Warhol) "They always say that time changes things, but you actually have to change them yourself." (Andy Warhol) "I am a deeply superficial person." (Andy Warhol) "An artist is someone who produces things that people don't need to have but that he - for some reason - thinks it would be a good idea to give them." (Andy Warhol) LIST OF SOURCES - http://www.medienkunstnetz.de - http://www.warhol.org - http://www.wikipedia.org - http://www.warhol.org - http://www.artchive.com - http://www.artlex.com - http://www.popartists.com - http://www.artcyclopedia.com - http://www.warholprints.com - Tilman Osterwold, POP ART, 2003, Taschenverlag - Honnef Klaus, Andy Warhol: 1928 - 1987. Kunst als Kommerz, 1999, Taschenverlag - Leksikon Cankarjeve Zalo�be, 1990, Cankarjeva Zalo�ba ?? ?? ?? ?? 1 ...read more.