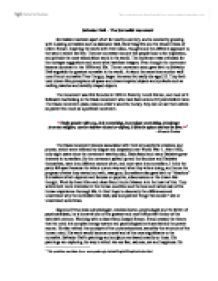 Salvador Dali - The Surrealist movement Surrealism has been apart of art for nearly a century, and is constantly growing with Leading surrealists such as Salvador Dali, Ren� Magritte and the Modern likes of Glenn Brown. Inspiring the world with their ideas, thoughts and the different approach to the way in which we live. They are contestant source that people look to for inspiration, and provide the most talked about work in the world. The movement was criticised for the outrages suggestions and some what tasteless imagery. Even thought the movement became dominant in the 1920s and 30s. The art movement soon gave birth to Salvador Dali arguably the greatest surrealist in the world. At about the same time another well none French surrealist Yves Tanguy, began his career but sadly die aged 55. They both used dream like perceptions of space and dream inspired objects and symbols such as melting watches and weirdly shaped objects. The movement was first founded in 1924 in Paris by Andr� Breton, and most of it followers had belong to the Dada movement who have been around 10 years before hand. ...read more.

Work by Joan Miro and close friend Andre Masson is in the heart of this. They where both more interested in the human condition and the love and hatred side of the human experience thorough life. In this I hope to discovery the differences and understand why the surrealists like Dali, saw and painted things that couldn't see or understand sometimes. Sigmund Freud was a physiologist, medical doctor, psychologist and the father of psychoanalysis, he is know as one of the greatest and most influential thinker of the twentieth century. Working with a close friend Joseph Breuer, Freud created the theory that the mind is a complex energy system and psychological enthuses behind the power source. He also refined the concepts of the unconsciousness, sexuality the structure of the human mind. His work would become crucial and of the most significants to the surrealist. Salvador Dali's paintings and sculpture are based exactly on these. His paintings are exploring the way in which we see fear, sadness, sex and happiness. ...read more.

It can be seen in every day life where people use realism in advertising of food, car, hair and beauty products and games. This kind of exposure would have not been seen in the early and mid 20th centaury. I find that the Dada movement was ever close in conjunction to surrealism and that is the big chunk of Dadaist saw the prospects in surrealism and took them, their fitted in very well with what was going on at the time, and only increased the boom in surrealism. The great thing with Dada is that why where problem the first art movement to step into politics and have to be credited for their efforts. The movement them selves faded due to not thinking what to do once something was completed, and most of the time did not use the incredible intensity they possessed hence moved to the surrealists for closure and constant exploration of theories and implication of work. By Pavlo Konotop 1 This quotation was taken from www.peak.org/~dadaist/English/Graphics/index.html 2 This quotation was taken from www.lucidcafe.com/lucidcafe/library/96may/freud.html ?? ?? ?? ?? ...read more.