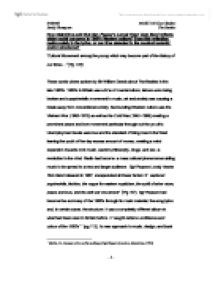 How might it be said that Sgt. Pepper’s Lonely Heart Club Band reflects wider social concerns in 1960’s Western culture? Does this reflection reside solely in the lyrics, or can it be detected in the musical material and/or structures?

‘Cultural Movement among the young which may become part of the history of our times…’[1](Pg. 157)

These words where spoken by Sir William Deeds about The Beatles in the late 1960’s. 1960’s in Britain was a time of counterculture; taboos were being broken and a psychedelic movement in music, art and society was causing a break away from conventional society. Surrounding Western culture was the Vietnam War (1965-1975) as well as the Cold War (1945-1989) creating a prominent peace and love movement particular through out the youth’s. Unemployment levels were low and the standard of living rose in the West leaving the youth of the day excess amount of money; creating a mind expansion towards rock music, eastern philosophy, drugs, and sex-a revolution in the mind. Radio had become a mass cultural phenomenon aiding music to be spread to a new and larger audience. Sgt Peppers Lonely Hearts Club Band released in 1967, encapsulated all these factors: it ‘captured psychedelia, fashion, the vogue for eastern mysticism, the spirit of adventure, peace and love, and the anti war movement’ [2]1(Pg.157). Sgt Peppers had become the summary of the 1960’s through its music material, the song lyrics and, in certain cases, the structure. It was a completely different album to what had been seen in Britain before. It ‘caught rainbow confidence and colour of the 1960’s’ [3]1 (pg.113). Its new approach to music, design, and burst of psychedelic rock music even produced a cult in the USA [4]1 (pg.113-114) giving evidence that The Beatles were becoming a cultural phenomenon. ‘In an unsystematic fashion it represented the life and times it was created in’ [5]1 (pg.3).

The Beatles were four men from Liverpool who wrote music from the influence of their surroundings and nostalgia; during playing Hamburg were they began all night gigs, they were able to met a variety of people who has a strong political influence of soviet left wing intellectuals, introducing them to new ideas. Surrounded by the working class they used their own experiences for example. ‘Strawberry Fields’ was inspired by a children’s home near Lennon. With a collaborative force of John Lennon and Paul McCartney, they were able to portray a point through both the rhythmic and harmonic inventive as well as the melody and lyrics. ‘a brilliant reflection of its kaleidoscopic 1967 self’[6]1 (pg.2). This was The Beatles view of the world in 1960’s- a psychedelic view of the everyday society that surrounded them during the making of Sgt Peppers, lending to their nickname of the cultural leaders of flower power. They used Sgt Peppers to aid their political revolution, ‘to undermine the state’ [7]1 (pg.3), along as they were also icons rather than just musicians.They shifted ‘the entire focus of modern British culture’ [8]1 (pg.157) through not only their lyrics and musical material but their sound as well. Because of their unusual performance spaces i.e. all night in Hamburg, they were able to absorb different genres of music. The USA had influences them with Motown, early soul whilst they were able to integrate other styles such as ‘jazz, folk music, rock, rhythm n blues, classical’ [9]1 (pg.137) as well as drawing on non-western sources such as Indian music ragas and sitars.

Sgt Peppers was a classical element of psychedelic, as well as other factors. The usage of tonal colour, unusual rhythmic changes, texture, melodic inventive created an invasion of creativity that other rock n roll bands would follow later on for example they had created the fin de siecle of convention. The psychedelic movement is shown clearly in the musical material of Lucy in the sky with diamonds. Psychedelia, in particular of music, is ‘characterized by musical experimentation and drug related lyric’s’ [10]2. Its esoteric, dream-like lyrics, for example ‘Tangerine trees and marmalade skies…’[11]create strong imagery and tonal colour. The lyrics are relating back to The Beatles prominent themes of childhood, nostalgia and longing for lost innocence by using Paul McCartney’s ideas of ‘Lewis Carroll and Alice Books’[12]1(pg.104). They begin to sound more like a hallucinogenic fantasy rather than a song based upon a picture. According to Paul McCartney, the lyrics were ‘based on Julian’s (John Lennon’s son) drawing of a girl at school …great psychedelic song…trade images with others for example, ‘cellophane flowers’…not deliberately initials of LSD…lyrics intentionally psychedelic…’ 1(pg.104) Psychedelia replicates the mind-altering experiences of hallucinogenic drugs by using lyrics that has the use of unusual sounds created by altering the vocals as well as instrumentation, with electronic effects such as tape-loops echoes and delays, phase shifting, or by playing taped sounds backwards. Another feature of psychedelic music is its elaborate production, often using multitrack tape recorders, and relies profoundly on electronic effects such as distortion. Lucy in the sky with diamonds heavily used these techniques as it produced a number of tracks including John Lennon producing a simple tape echo, which was later place over the tracks and created the reverberated sound of his voice. ‘All syllables were deliberate and monotone…a tamboura drone was able to give the song a languorous weight’[13]1  (pg.104). The usage of surreal adjectives breaks away from the conventional, standard lyrics of rock n roll. Lucy in the sky with diamonds emphasis’s the broken barriers that had began to separate people in the 1960’s. Sgt Peppers was representing the social life of the working class people, ‘new disorder hiding high’[14]1 over the ‘old order crumbling’[15]1  (pg.5)

Psychedelia had also been considered for the album cover. Sgt Peppers had an unconventional cover that surpassed anything previously attempted in rock music. Its sleeve was vividly coloured with an imaginary audience that was taken from a list of icons that the band members, as well as other like the art director Peter Blake and George Martin, created. Whilst The Beatles stood in brass band uniform, behind them stood life-size cut outs and waxwork figures. The inner sleeve featured a close-up portrait of the four Beatles against a gold background, and the back cover as well as the complete lyrics of all the songs. An obvious link to Karl Marx as he appears on the front cover. Marxism was a crucial understanding in the 1960’s as its communist ideas were part of the intellectual furniture of culture. Unfortunately, like most new things, the plants on the front of the cover caused controversy as they had a significant appearance to ‘marijuana plants’ [16]1(pg.116)

Sgt Peppers received a large amount of criticism on their album as the lyrics could be drug related, ‘possibility of creative substance abuse’ [17]1 (pg.2). On the release of A day in the life, the BBC referred to it as “could be considered to have drug taking implications”[18]1 (pg.4) and became banned from being played on their radio broadcasting. Lyrics such as ‘I’d love to turn you on’, ‘upstairs and had a smoke/somebody spoke and I went into a dream’ were some of the adjectives that were considered to be drug related whilst they were of cultural significance. Another ethnic importance was the placing of the song on the album. It was placed last after the reprisal of Sgt Peppers Lonely Hearts Club Band because George Martin said ‘nothing could finish the last chord’ [19]1 (pg.148) butalso it stands outside the album; outside life, which fitted with most of the 1960’s thinking. Other media sources began to “analyse” Sgt Peppers and began inverting words so they had a heavy drug implications. For example, ‘whilst rehearsing, instead of counting in John repeated “sugar plum fairy” which in drug vocabulary is the person who brings you your dope’[20]1(pg.52). As later described, the lyrics had been influenced by The Beatles everyday culture. They based the lyrics on media influences, which were occurring as they were writing such as the Tara Browne death and potholes. Perhaps the pessimistic outlook that A day in the life had, rather than the optimistic view of the rest of the album also aided the banning of the song. ‘Its anarchic sound of an orchestral climax’ [21]1 (pg.155) and ‘Marijuana dream of vocals wailing’[22]1 (pg.156) is supported by the melodic and harmonic dislocation aiding the segments of the song. Throughout Sgt Peppers, none of the tracks have a clear message and therefore have a number of interpretations including the media outlook of drug relations, letting A day in the life become an ‘escapist fantasy’ [23]1 (pg.3). It departs from convention to become this ‘fantasy’ by the introduction of eastern mysticism. It converges eastern philosophy with western culture by the use of Indian instruments, expanded the counterculture sect.  Psychedelic rock was affected by the modern interest in the music of India, particularly the raga form and the classical instrumental styles of Hindustani music, which was popularised,  in the west, by The Beatles and Ravi Shankar. It has extended, modal structures, long passages of improvisation, unusual time signatures and exotic instruments like the tambura.

Within you Without you experimented with Indian music and Indian philosophy in the sense of the lyrics. The lyrics look at ‘the inner meaning of life’ [24]1  (pg.125) which is a Hindustani quality. George Harrison, whose song from Sgt Peppers this exclusively is, combined western instruments such as European players (strings) with Northern Indian classical music. For 1960’s, although there was a strong eastern culture spreading, this was unusual for western pop songs: it had ‘no harmonic structure, no chords and didn’t modulate’ [25]1 (pg.129). Unlike the rest of the album, which provides a more “hallucinogenic” feeling, Harrison was able to provide a more hypnotic feel ‘pushing at the frontiers of the karma’ [26]1  (pg.3).

1960’s counterculture of taboos being broken and a psychedelic movement in music, art and society caused a break away from conventional society. The promotion of the peace and love movement particular through out the youth’s created a mind expansion towards rock music, eastern philosophy, drugs, and sex-a revolution in the mind. Sgt Peppers Lonely Hearts Club Band, encapsulated all these factors: it ‘captured Psychedelia, fashion, the vogue for eastern mysticism, the spirit of adventure, peace and love, and the anti war movement’ [28]1(Pg.157). Sgt Peppers had become the summary of the 1960’s through its music material, the song lyrics and the structure of the album cover. It was a completely different album to what had been seen in Britain before. It ‘caught rainbow confidence and colour of the 1960’s’ [29]1 (pg.113). Its new approach to music, design, and burst of psychedelic rock music giving evidence that The Beatles were becoming a cultural phenomenon. ‘In an unsystematic fashion it represented the life and times it was created in’ [30]1 (pg.3).

Word Count (including Endnotes and Footnotes):