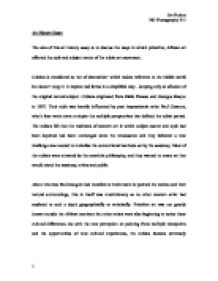 The aim of this art history essay is to discuss the ways in which primitive, African art affected the style and subject matter of the Cubist art movement.

Art History Essay The aim of this art history essay is to discuss the ways in which primitive, African art affected the style and subject matter of the cubist art movement. Cubism is considered as 'art of abstraction' which makes reference to the visible world but doesn't copy it. It depicts real forms in a simplified way - keeping only an allusion of the original natural subject. Cubism originated from Pablo Picasso and Georges Braque in 1907. Their style was heavily influenced by post impressionist artist Paul Cezanne, who's later work starts to depict the multiple perspectives that defined the cubist period. The cubists felt that the traditions of western art in which subject-matter and style had been depicted had been unchanged since the renaissance and they believed a new challenge was needed to revitalise the conventional methods set by the academy. Most of the cubists were attracted by the anarchist philosophy, and they wanted to create art that would shock the academy, critics and public. About this time Paul Gauguin had travelled to Tahiti were he painted the natives and their natural surroundings, this in itself was revolutionary as no other western artist had explored to such a depth geographically or artistically. ...read more.

There is no perspective, no modulated colours and it is made up of abstract simplifications. After painting Les Demoiselles D' Avignon, Picasso began to paint in a style that was influenced by the two figures on the right side of the painting which have a distinct resemblance to the African mask. The shape of the head, nose, even the eyes and mouth all share a likeness for the mask, this painting is also said to have initiated the so-called 'negro period' (1907-1908). Picasso, Head of Woman, 1907 Dan Mask This is one of Picasso's 'negro period' paintings, there are very clear similarities between the two, the shape of the head, which is an elongated oval, the facial features, being the prominent large nose, sunken eyes, raised eyebrows and small mouth, even the colours are extremely alike . Picasso starts to use a very narrow colour spectrum during this time; this is because the Africans used natural materials like wood, which inspired the cubists to mainly concentrate on the natural brown, yellow and green earth tones. The effect of these colours is to create a sense of the organic, adding to the primitive feel. You can see the painterly brushstrokes and there is little use of modulated colour. ...read more.

Picasso, Glass and Bottle of Suze, 1912 and Georges Braque, Violin and Pipe, 1913 These are both examples of synthetic cubism; they do in fact look very comparable. Picasso and Braque often found it hard to distinguish the differences between their own works. The colours still seem fairly neutral with a hint of brighter colours but there is a distinct lack of primitive influence. So in conclusion, the cubist's aim was to create a new approach to Western art, primitive art was used because they felt that it helped them in achieving this aim, They provided a radical alternative to the traditional Western conventions. It is clear to see how primitive art influenced and ultimately inspired the cubist artists. Pablo Picasso, notably, being the first to make visual reference to the stylistic and simplistic qualities of African art in his own work. Georges Braque, on the other hand, didn't use the African art so obviously; he preferred to paint landscapes and still life. He did however, take on board, the natural colours and stuck to a narrow colour spectrum. Cubist artists only really used elements of primitive art mainly when it suited their own needs. Therefore, primitive art, though not the only source of inspiration, nevertheless had a vital influence on the foundations of cubism. ...read more.