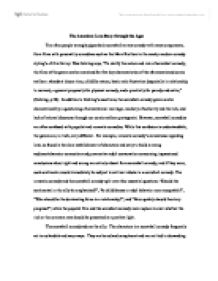 The American Love Story through the Ages

The American Love Story through the Ages Too often people wrongly pigeonhole screwball as any comedy with zany components, from films with personality comedians such as the Marx Brothers to the wacky modern comedy styling's of Jim Carrey. Wes Gehring says, "To clarify the nature and role of screwball comedy, the films of the genre can be examined for five key characteristics of the aforementioned comic antihero: abundant leisure time, childlike nature, basic male frustration (especially in relationship to women), a general propensity for physical comedy, and a proclivity for parody and satire," (Gehring, p.29). In addition to Gehring's assertions, the screwball comedy genre can be characterized by a questioning of conventional marriage, mockery of authority and the rich, and lack of rational discourse through our comic antihero protagonist. However, screwball comedies are often confused with populist and romantic comedies. While this confusion is understandable, the genres are, in truth, very different. For example, romantic comedy's earnestness regarding love, as found in the slow establishment of characters and story to build a strong audience/character connection and provocative adult conversation concerning impassioned conclusions about right and wrong are entirely absent from screwball comedy, and if they were, such sentiments would immediately be subject to satirical rebuke in a screwball comedy. The romantic comedy and the screwball comedy split over four essential questions: "Should the sentimental or the silly be emphasized?", "Is childishness or adult behavior more acceptable?", "Who should be the dominating force in a relationship?", and "How quickly should the story progress?", while the populist film and the screwball comedy main rupture is over whether the rich or the common man should be presented in a positive light. The screwball comedy adores the silly. The characters in a screwball comedy frequently act in outlandish and zany ways. They are bored and complacent and are not tied to demanding careers, which is recipe for craziness. ...read more.

However, even Julianne's confession of love is a direct contrast to a screwball comedy's course of action. In a screwball comedy, important issues are swept under the rug and are not discussed. An example of this is The Awful Truth, in which the issues in Jerry and Lucy's marriage and their reasons for suspecting each other of infidelity are not truly discussed. Julianne's profession of love to Michael, fruitless as it ends up being, is a much more adult response to an emotion than Lucy and Jerry's reaction to their emotions. Another major difference is that within romantic comedies, the career and responsibilities play a major role in the lives of the characters. Everyone in the romantic comedy has a career and is actively involved within that career. However, in screwball movies such as The Thin Man, detective Powell is happy just spending his wife's money and experiencing the most pleasure he can in his settled down state. At one point, everyone is enjoying cocktails at a party when the joyful singing on the radio is interrupted by a report describing a developing criminal investigation and Powell's response is to turn it off saying "Does it always have to be business?" When confronted about the investigation by his friends his response is "I'm a gentleman now" implying his lack of concern for his responsibilities and career. However, in You've Got Mail, the hero and heroine clash over their businesses. Joe's book "Superstore" threatens to destroy Kathleen's smaller bookstore, and they clash continuously over their careers. This can be juxtaposed to The Awful Truth in which there is no attempt to establish an occupational cover for Cary Grant. In fact, there was a point in filming "When Cary came to that scene he stopped and laughed, 'Where am I supposed to have gotten any money?' He asked. 'I never work, you never show me doing any sort of job'" (Gehring, 31). ...read more.

to Ellie losing her cynical attitude and falling in love with Peter and the idea of the working class lifestyle rather than going back to her old affluent life before. As Jim Leach put, "the only positive strategy in screwball comedy is to accept the all-pervasive craziness, the populist comedy argues that what society regards as crazy is really a manifestation of the normal human values with which society has lost touch." In It Happened One Night Peter claims to be an expert on hitchhiking [cracker-barrel philosopher] but nothing he tries works, eventually out of frustration he ends up thumbing his nose at passing cars. Yet the sheltered Ellie then shows him how it's done. She stops the next car dead in its tracks by lifting up her skirt and showing off a shapely leg. This glorification of the ordinary is a key component in any populist film. The screwball formula has changed markedly since the 1930s, the stories are slow to start and possess provocative conversation about morality and direct social commentary on political and societal issues. Today's take on the genre might actually have gay characters, as in My Best Friend's Wedding, whereas a pioneering screwball comedy only teases about it, such as when a frilly night-gowned Cary Grant jumps in the air and yells, "I just went gay all of a sudden!" in Bringing Up Baby. However, whether screwball or romantic comedy, love invariably triumphs on the silver screen. Conventional marriage may be called into question or the role of men and women may be redefined, but the common motif that has seemed to always reign supreme among all others is love. The undeniable message in screwball, romantic and even populist films is that love will endure, that love will triumph over class, money, desire and any societal bounds. The genres will always be in a state of flux because American culture is forever changing, but the message as reflected by the past has and will probably always be the same. ...read more.