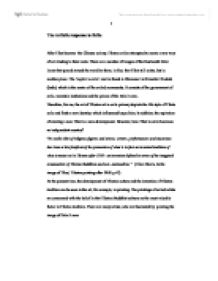 The Artistic response to Exile

The Artistic response to Exile After Tibet became the Chinese colony, Tibetan exiles attempted to create a new way of art alluding to their roots. There are a number of images of the fourteenth Dalai Lama that spread around the world to show, in fact, that Tibet still exists, but in another place. The 'capital in exile' can be found in Dharansal in Himachal Pradesh (India) which is the centre of the exiled community. It consists of the government of exile, monastic institutions and the palace of the Dalai Lama. Therefore, for me, the art of Tibetan art in exile primary depicts the life style of Tibets exile and finds a new identity, which influenced by politics. In addition, the aspiration of creating a new Tibet is a new development. However, how Tibet in exile becomes an independent country? "An exilic elite of religious figures and artists, writers, performances and musicians has been at the forefront of the promotion of what is in fact an invented tradition of what it means to be Tibetan after 1959: an invention defined in terms of the imagined communities of Tibetan Buddhism and neo-nationalism." ( Clare Harris, In the image of Tibet, Tibetan painting after 1959. p.42) At the present time, the development of Tibetan culture and the invention of Tibetan tradition can be seen in the art, for example, in painting. ...read more.

Two figures, on the left and on the right side, are presumably Padmasambhava and Shantarakshita, the important Buddhist Gods. However, Jampa was later refused permission to further paint in Dharamsala. The reasons were his views and his style of realistic paintings, which was considered as non-Tibetan. Moreover, this style was suspected to have a connection with Social Realism. One thing that comes to my mind is why the style of his painting has become an issue. Is he a Social Realist person? and if so, why did he leave Tibet for Dharamsala? Why did he join the Social Realism in the beginning? In addition, Harris suggests the reason for this mistake, was unclear. The characteristics of Jampa's painting are based on his education in China. In fact, Jampa did not intend to opposite the Tibetan exile's view, because, in later year, he became a realist artist rather than being with Social Realism. Hence, this painting of the Three Kings remains an unfinished, until next period. The difficulty of painting 'The Three Kings' are apparently concerned with the politics in the Tibetan exiles society. This can raises the question of what style of exiles arts should be used for painting in exile. The answer probably likes in the repainting of the ' The Three Kings'. In the end, a junior artist, called Rigzin Peljor, painted the replacement in 1992. The characteristic of Peljor's work is the use of the Menri style, which is a combination of various styles from the history of Tibetan painting. ...read more.

In addition, there is another school outside Dharamsala, which is the centre of the school f of arts and crafts. 2.4 The Norbulingka Cutural centre It is called the Norbulingka after the Dalai Lama's summer palace in Lhasa. It is a school for training students who would like to practise Tibetan arts and crafts. The building is designed in a Japanese style. The main temple is built in a pre-1959 style. However, other buildings show a modern style, which are obviously in a less traditional form. In terms of teaching arts and crafts, the style of painting differs slightly from that of Library Art School. Tenpa Choepel is the master artist and teacher at the Norbulingka centre. Although, he mostly produces the religious paintings in the Merni style, he tends to teach his students to paint in ' authentic' style1. Interestingly, the students of the Norbulingka Cutural centre have to learn to create the iconography of deities in individual styles. As, for non-Dharamsala- based artists, their works play a role in both Tibetan and Indian styles, which brings to their paintings a feeling of the exotic. In this way, we can say that non-Dharamsala artists are freer to develop their art as they try to distance themselves from the authority of Dharamsala. These above examples show the characteristics and styles of the paintings in exile. They are all based on the subject of religion and in the Merni style, which has become the official style of the exile. 1 See Clare Harris, In the image of Tibet, Tibetan Painting after 1959, p 64 1 ...read more.