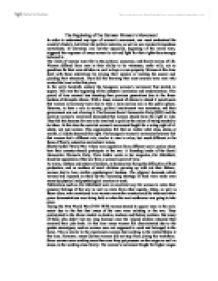 The Beginning of the German Women's Movement

The Beginning of the German Women's Movement In order to understand any type of women's movement, one must understand the country's history. Activities like political outcries, as well as war can start tremendous movements. In Germany, one activity especially, beginning of the world wars, triggered the response of many women to act and fight for their rights they strongly believed in. The limits of women were felt in the political, economic, and family realms of life. Women differed from men in their ability to be witnesses, make wills, act as guardians for their own children as well as buy or own property. Women at this time dealt with these restrictions by voicing their opinion or locating the source and pleading their statement. They did this knowing that most sources were men who created the laws in the first place. In the early twentieth century the bourgeois women's movement first started to appear. This was the beginning of the industrial revolution and modernization. This period of time seemed less daunting than previous generations due to the fewer burdens of domestic chores. With a lesser amount of chores to attend it would seem that women in Germany were able to take a more serious role in the public sphere. ...read more.

Since a lot of men were serving in the military, this allowed more participation in the public sector for women. More females in this sphere allowed better access for young girls to attend class as well as other opportunities. Finally in 1918 the bourgeois women's movement as well as the socialist women's movement received what they struggled for so long, the right for women to vote. However, the distribution of political power in the parliament made it difficult for them to achieve their goals immediately. Also, this new electoral code made men and women (husband and wife) vote separately, which was important for women because it allowed them to vote for what they really wanted, and not be influenced by their husbands. The year of 1918 was also the fourth year of the First World War. This meant that German women were experiencing the hardest part, waiting for or seeing their loved ones come home. Hundreds of thousands of them lost their husbands, brothers, sons and lovers-or got them back blinded, crippled, or nervous wrecks; or read of them simply as 'Missing', that dreaded noncommittal little word in the casualty lists. In the early 1920's unemployment was skyrocketing. ...read more.

This promoted students, especially women, to speak out on local issues. At this time women's studies classes were being created at all different type of universities. Most importantly women in West Germany felt that they were over qualified for the occupations that were open to them, and this was unacceptable to them. They insisted that a more diverse job market was desperately needed for women. Since the Berlin wall fell down, women's movements have still been active but in a different way. The difference between the past and present deals more with the way the movement has been structured. Currently these organizations are becoming more professional. NGO's (Non-Governmental Organizations) were formed in 1989 soon after the country and feminist's movements united. This meant however that these movements were becoming increasingly dependent on the state. The agendas of the political parties in Germany have also seemed less popular for women issues. What makes the German women's movement so fascinating is how it started. Without the beginning movements taking place in the Renaissance who knows where the German women's movement would be today. The early history of the women's movement is important because it explains the long struggles women encountered in the past. It also explains how long ago women were noticing and dealing with such controversial issues. Most notably the early movements developed a foundation for more movements to be created in the future. ...read more.