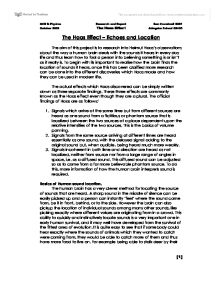 The Haas Effect - Echoes and Location

The Haas Effect - Echoes and Location The aim of this project is to research into Helmut Haas's observations about the way a human brain deals with the sounds it hears in every day life and thus learn how to fool a person into believing something is or isn't as it really is. To begin with its important to realise how the brain finds the location of sounds it hears, once this has been clarified more research can be done into the different discoveries which Haas made and how they can be used in modern life. The actual effects which Haas discovered can be simply written down as three separate findings. These three effects are commonly known as the Haas effect even though they are a plural. The official findings of Haas are as follows:I 1. Signals which arrive at the same time but from different sources are heard as one sound from a fictitious or phantom source that is localized between the two sources at a place dependent upon the relative intensities of the two sources. This is the basics of volume panning. 2. Signals from the same source arriving at different times are heard essentially as one sound, with the delayed signal adding to the original sound but, when audible, being heard much more weakly. 3. Signals incoherent in both time and direction are heard as not localized, neither from source nor from a large range of angles in space, i.e. as a diffused sound. This diffused sound can be adjusted so as to come from a far more believable phantom source. To do this, more information of how the human brain interprets sound is required. Basics of Human sound location. The human brain has a very clever method for locating the source of sounds that are heard. A sharp sound in the middle of silence can be easily picked up and a person can instantly 'feel' where the sound came from, be it in front, behind, or to the side. ...read more.

This second effect observed is related to how the human brain can choose to ignore sounds which it knows are useless and confusing to speech recognition. The most obvious example of this is removing very close echoes from a voice or sound to make it easier to understand and pinpoint its location. This effect ties in with the previous observation because it relies entirely on the time delay between sounds and how the brain can track all the different sounds at once to sense echoes and cancel them out before it tries deciphering what was said or heard. A small experiment which can be carried out to help explain this phenomenon requires a musical metronome and a tapping stick (drumstick or even a pencil) If the metronome is set ticking away somebody tries tapping the pencil in time with the beat of the metronome they will normally tap slightly ahead of the click creating an obvious noise of the two together. This is a normal thing to happen and will go on for a while until every now and then a very loud metronome click will be observed with no accompanying pencil tap at all and sometimes there will be a very loud pencil tap with no metronome beat. This is a prime example of the Haas Effect in which echoes are singled out to enhance the original sound. This can be explained by realising that once a musical object is struck it goes into a characteristic form of chaos for a little while until it settles down into its standard vibration pattern which created the sound we are familiar with. The human brain has evolved to listen out for this chaotic attack (or transient) as it represents the beginning of a new sound out of the mumble of other noises taking place in the backgroundII. It seams that the human brain is constantly on the lookout for these tell tail transitions and it is quite a complicated process to distinguish between separate sounds which happen very close together. ...read more.

there is a formula to estimate the coherence. The formula is taken from the Bipolar Transmission Line Project website: The meaning of the above formula is as follows. f( t ) is the function of the initial sound. f( t-? ) is the function of the delayed sound where ? is the delay. R(?) is a function of the delay which can be used to measure the coherence in different sounds observed by the listener. The formula states that the integral of the two sound functions multiplied together between limits of plus and minus infinity. When this function is plotted for different values of delay in ms ranging from 0 - 5 ms you get a curve starting from 1 and dropping quickly at first and then more shallowly to reach a steady value of around 0.2 The graph is included below. This covers all of the effects which Haas discovered and has also included many of their different uses in modern society, the basics of human hearing using the physical method of trigonometry and distance time calculations naturally are now understood and a lot more has been learnt about just how much physics the brain is calculating constantly throughout the day. Evaluation: From the research which was carried out on this project a great deal was learnt about the different discoveries which Haas made. However some of the different sources were slightly contradictory as to the exact values of the Haas Window. The more simplistic sources like Charles Macchia's paper seamed to make far more sense as to the different values as it gave more examples which could be followed explaining where each number was to be used. For example there is no consistency as to the Haas cut off point, some sources quote it as 35 ms, some as 25 ms. the information used to draw the graph of the area in which the effect works best also seams to go up much higher than the 35 ms cut off point. ...read more.