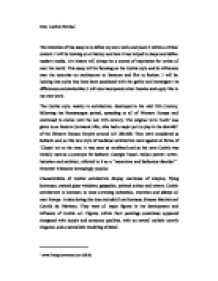 The Neo-Gothic Revival in modern photography. The intention of this essay is to define my own work and place it within a critical context. I will be looking at art history and how it has helped to shape and define modern media.

Neo- Gothic Revival The intention of this essay is to define my own work and place it within a critical context. I will be looking at art history and how it has helped to shape and define modern media. Art history will always be a source of inspiration for artists all over the world. This essay will be focusing on the Gothic style and its influences over the centuries on architecture to literature and film to fashion. I will be looking into styles that have been associated with the gothic and investigate the differences and similarities; I will also incorporate other theories and apply this to my own work. The Gothic style, mainly in architecture, developed in the mid 12th Century, following the Romanesque period, spreading to all of Western Europe and continued to evolve until the late 15th century. The original term 'Goth' was given to an Eastern Germanic tribe, who had a major part to play in the downfall of the Western Roman Empire around AD 300-600. They were considered as barbaric and, as this new style of medieval architecture went against all forms of 'Classic' art at the time, it was seen as unrefined and so the term Gothic was initially used as a synonym for barbaric. Georgio Vasari, Italian painter, writer, historian and architect, referred to it as a "monstrous and barbarous disorder"1. However it became increasingly popular. Characteristics of Gothic architecture display overtones of steeples, flying buttresses, stained glass windows, gargoyles, pointed arches and towers. ...read more.

Images such as Henry Peach Robinson's Fading Away, is a composition of five negatives, of a young girl dying of tuberculosis with her family members at her bedside. Fig 7. Photographing the dead to look as though they were alive was also extremely popular in the Victorian era; mostly they would be babies, posed peacefully in their cribs, occasionally with other family surrounding the crib, like a typical family photo. Fig 8. With the invention of the moving image in the late 19th Century, it wasn't long before horror films were being made. The most notable and sometimes credited as being the first horror film is that by Georges Meilies titled Le Manoir du Diable translated as The House of the Devil. This silent movie isn't scary and wasn't intended to be, its intension was to make the audience laugh. The content follows the Gothic vibe and includes a bat that transforms into a person and ghosts and objects that suddenly appear then disappear. Stop animation is seen now as a simple technique for making a film but the Victorian viewers where mystified by it. Fig 9. When analysing the photographic image, Bathes argues that an image is made up of signs and codes; he explored these meanings and the way in which people read them. His theory "is a common technique applied in the critical analysis of photographic meaning"11. The word 'Goth' nowadays conjures up many different mental images; artists, photographers and musicians use their own interpretations within their work. ...read more.

I have a developed a de-saturated hyper real technique with my recent work. I feel that this complements the subject matter, as well as enhancing my interpretation of the gothic theme. As we have seen, gothic themes are often used in a contemporary fashion context. In my current project I will be replicating the works of Henry Fuseli and incorporating them into a fashion advertising campaign. However, I will use my contemporary style to bring the works into a modern context. It is clear to see what influence the Gothic in the 12th Century has had on future developments of the term 'Goth' even if the original meaning of the style has effectively been forgotten. Many People within the art circle, from fashion designers to film makers, find it equally as interesting, each interpreting it as their own and creating something unique. As for photography, gothic themes run throughout contemporary high-end fashion magazines, such as photographer Steven Meisel producing gothic inspired advertising and editorials. Today's society sees Goth's as social outcasts, yet photographers and fashion designers use this faux pas to instigate shock from their audience and recognition for producing a piece of work that stands above mainstream fashion. 1 www.Designioustimes.com (2010) 2 www.arthistoryarchive.com (n.d) 3 www.photography.com (n.d) 4 Scheidegger & Spiess (2005) p33 5 Scheidegger & Spiess (2005) p116 6 Page Mistress (2010) 7 Tom Lubbock (2009) 8 Wikipedia (2011) 9 Laurel Amtower (n.d) 10 Steele & Park 2009, p11 11 Bull 2010 p32 12 http://www.newinfluencer.com/mediapedia/denotation-and-connotation/ 13 Steele & Park 2009 p23 14 http://thegothicclothing.com/archives/vivienne-westwood 15 http://www.whats-wrong-with-the-zoo.com/first-issue-of-i-d-magazine/ 16 http://www.suite101.com/content/women-in-film-a45612 ?? ?? ?? ?? ...read more.