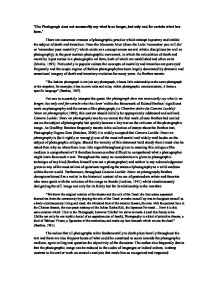 'The Photograph does not necessarily say what is no longer, but only and for certain what has been.' Discuss

When Barthes wrote Camera Lucida: Notes on photography, it is starkly apparent that his words and attitude are incredibly influenced (and it could equally be argued that because of this these words made more glib, or perhaps even aphoristic) by the grief brought upon by the death of his mother: "...the photograph's immobility is somehow the result of a perverse confusion between two concepts: the Real and the Live: by attesting that the object has been real, the photograph surreptitiously induces belief that it is alive, because of that delusion which makes us attribute to Reality an absolute superior, somehow eternal value; but by shifting this reality to the past ('this-has-been'), the photograph suggests that it is already dead." (Barthes, 1981) Whilst there is a significant argument for a relationship between photography and death throughout Camera Lucida: Notes on photography, it could be considered that there is also a much stronger case to be made for the relationship between the camera and love; not only as being the impetus behind such a text but as a more valid correlation between itself and the photograph than death. As Barthes states: "It is as if the Photograph always carries its referent with itself, both affected by the same amorous or funereal immobility, at the very heart of the moving world: they are glued together, limb by limb, like the condemned man and the corpse in certain tortures; or even like those pairs of fish (sharks, I think, according to Michelet) ...read more.

Barthes' own subjective involvement with the still images of his own considered selection forms the basis of creation upon which he builds the foundations of the notions contained within Camera Lucida: Notes on photography. In much the same approach one could view the picture in Figure one (Roland Barthes with students from his 1974 Seminar at the �cole des Hautes �tudes) with a similar emotional response as Barthes' reaction when viewing pictures of his deceased mother, should the viewer have such an emotional attachment to Barthes in the first place. The response would also be tangible should the viewer merely have the prior knowledge of who Barthes is and that he is now himself deceased. Most of the major figures in psychoanalysis including Freud, Melanie Klein and Jacques Lacan agree that what fuels creative drive is a response to something missing. For Lacan in particular this was driven by a visual recognition of our complete mirror image when, as small children, we had very limited control over our physical body (Lacan, 1991). This ties in heavily with Kristeva's work on abjection but more crucially it is this profound sense of loss which permeates throughout Barthes' work in Camera Lucida: Notes on photography, and also removes the objectivity from the book which one would normally and usually expect from such an important text, particularly one which purports to be academic in delivery and value, but especially one which has become such an important point of reference for an entire artistic discipline. ...read more.