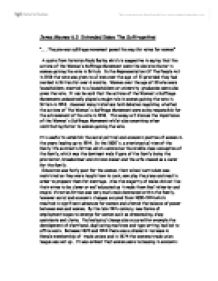 &quot;. . . The pre-war suffrage movement paved the way for votes for women&quot;

Jenna Mooney 6.3 Extended Essay The Suffragettes ". . . The pre-war suffrage movement paved the way for votes for women" A quote from historian Paula Barley which is suggestive in saying that the actions of the Woman's Suffrage Movement were the decisive factor in women gaining the vote in Britain. In the Representation Of The People Act in 1918 the vote was given to all men over the age of 21 provided they had resided in Britian for over 6 months. Women over the age of 30 who were householders, married to a householders or university graduates were also given the vote. ...read more.

In the 1850`s, a steriotypical view of the family life existed in Britian which centred on the middle class conception of the family, which was the dominant male figure of the family being the proctector, breadwinner and dicision maker and the wife viewed as a carer for the family. Education was fairly poor for the women, their school curriculum was restricted so they were taught how to cook, sew play the piano and read in order to prepare them for marriage. Also the majority of males did not like their wives to be clever or well educated as it made them feel intherior and stupid. ...read more.

It was evident that women were increasing in economic importance. Educational advances also came with economic advances, which included Queen College founded in 1848 as a teacher training insitution for women . Academic schools.soley for girls for example Chaltenham Ladies College were built. Emily Davis, a feminist whose aim was to bring girls education up to the standard of boys campaigned for the right of admission for women into universities. Jemmima Clough, another femenist also set up Newenham Hall a womens college. Emily Davis had an uncompromising attitude whilst Jemmima Clough was a graduist. From this we can identify early signs of the Suffragist/Suffragette distinction. By 1900 a small number of middle class women were ...read more.