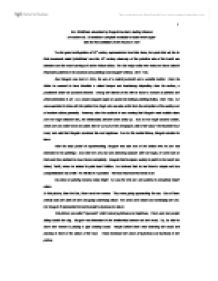 The Primitivism advocated by Gauguin has had a lasting influence on modern art. It heralded a complete revolution in taste which began with the first exhibition of the Fauves in 1905.

The Primitivism advocated by Gauguin has had a lasting influence on modern art. It heralded a complete revolution in taste which began with the first exhibition of the Fauves in 1905 "As the great conflagration of 20th century expressionism burst into flame, the spark that set fire to that movement called 'primitivism' was the 19th century discovery of the primitive arts of the South sea islanders and the wood carvings of native African tribes. The first major artist who works on these colorful Polynesian patterns in his woodcuts and paintings was Gauguin" (Flemn, 1963: 712). Paul Gauguin was born in 1849, the son of a radical journalist and a socialist mother. From his father he seemed to have inherited a violent temper and headstrong disposition; from his mother, a passionate desire for personal freedom. Among the friends of his wife he found a number of painters and others interested in art. As a result, Gauguin began to spend his holidays painting (Stites, 1940: 730). He was associated in Arles with the painter Van Gogh who was also suffer from the corruption of the society and of modern culture generally. However, after the accident in one evening that Gauguin went outside alone and Van Gogh followed him, the relationship between them broke up. And as Van Gogh became crazier, which one can notice from his action that he cut out of the newspaper, title of the story 'The Murderer Run Away' and said that Gauguin murdered his own happiness. ...read more.

It also used bright colors (Lloyd, 1991: 60). In Street Scene, one of several painted in Berlin after he moved there in 1911, it had the simplified form for the men in the background is a convention is much primitive art (Hamilton, 194). This picture, Munch's Puberty, strongly recalled Gauguin's primitivizing, Young Girl with Fan, in the Folkwang Museum. Both of them had mask-like faces (Lloyd, 1991:76). The work of Karl Schmidt-Rottluff was even more aggressive in technique. Although he usually painted neutral subjects such as figure studies, the nude, landscapes, and still life, he exploited clashes of strong colors and linear distortions (Hamilton, 194). This picture, Nude Before a Mirror, based on primitive art. The face and figure were from African masks and figures (Hamilton, 194). This painting, Four Evangelists, Matthew, Mark, Luke and John, was keeping with the idea that interior design should unite different media and art forms. The mask-like heads made a far more general reference to tribal art (Lloyd, 1991: 60). Emil Nolde also had a journey to New Guinea which one can notice of how this native people greatly influenced his works. With this picture, An Aborigine with Headscarf, the new style of facial decoration, scarification, hairstyle, jewelry and costume were shown. The bone structure of the native face was shown a pattern of light and shadow (Lloyd, 1991: 220). Gauguin did not influence only the German artists but also French artists, among them, Matisse, found in their simplified geometrical forms and a justification for their abstract designs. ...read more.

When Moore started to do a sculpture, he did not start by looking at his model. He started by looking at his stone. He wanted to 'make something' out of it. Not by smashing it to bits, but by feelings his way, and by trying to find out what the stone 'wanted' (Gombrich, 1995:585). One can see from this sculpture, Recumbent Figure. Moore made use of the natural shape of Wood like Matisse's Blue Nude. After the Second World War, he built this large figure, King and Queen, in Bronze. It probably the most famous work. Personally, I like this Primitive art the most because of the bright colors such as green, red, yellow, orange, and blue. Whenever, I see these pictures I feel fresh and relieve. Moreover, I do not have think much about the pictures because most of the previous pictures usually had their meanings. I think that art should not be something that I have to spend a lot time to think about it. It should be something that can make me feel good and relaxed. Bibliographies Adams, Stephen. Lecture of History of Western Art, 2002. Flemn, William. Art and Ideas. United States of America: Holt, Rinehart and Winston, 1963. Gombrich, E. H. The Story of Art. London: Phaidon Press Ltd., 1995. Greenfeld, Howard. Pablo Picasso: An Introduction. Chicago: Follett Publishing Company, 1971. Hamilton, Heard George. 11th and 20th Century Art: Painting, Sculpture, and Architecture. New York: Harry N. Abrams, Unknown date of publication. Lloyd, Jill. German Expressionism: Primitivism and Modernity. London: Yale UP, 1991. Stites, J. Raymond. The Arts and Man. United States of America: McGraw-Hill, 1940. http://www.nga.gov/education/schoolarts/rousseau.htm http://www.mcs.csuhayward.edu/~malek/Miro.html http://www.cubism-asada.com/artist/sonia%20Delaune.html 1 ...read more.