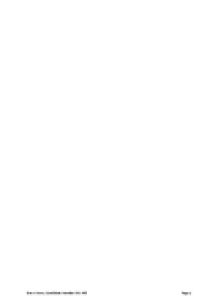 ﻿________________ ABSTRACT Research Question Kabuki is a traditional, yet rather unique style of Japanese theatre originating in the Edo period[1] of Feudal Japan. There are various techniques of Kabuki which make it such a unique theatre style. Since the 1960s, these Kabuki techniques have been slowly incorporated into western theatre styles. At its core, the art of Kabuki lies in artifice and beauty. It is the beauty of Kabuki theatre I believe could reinvigorate traditional theatre styles. Therefore the question this essay attempts to answer is: ?How would the application of Kabuki production elements contribute to a performance of Bertolt Brecht?s ?The Caucasian Chalk Circle? to enhance the tale?? Scope of Investigation The aim of the research is to identify and analyse the various Japanese aesthetics and acting techniques used by Kabuki in a way which could be incorporated into the classical performance of Bertolt Brecht?s acclaimed epic theatre ?The Caucasian Chalk Circle? and to examine the applicability of these elements to a modern production of ?The Caucasian Chalk Circle?. This essay will not look at Kabuki theatre in its totality but will focus largely on the stage aesthetics and acting techniques used in Kabuki theatre. The research presented in this essay covers those elements of Kabuki with direct relevance to Bertolt Brecht?s play ?The Caucasian Chalk Circle? Summary of Conclusion The difficulty of this area of research is that theatre is very subjective and interpretations by one person as to what elements would benefit a performance may to another person seem pointless; however, if this research is successful it should demonstrate to each reader how historic epic plays could be performed with a Kabuki influence so the tale can be retold to many future generations. Abstract Word Count: 285 ________________ Contents Introduction Explanation of Kabuki Theatre Discussion of Kabuki techniques Acting Techniques Actors Expressions Actors Aesthetics Stage and Set Effects Explanation of Epic Theatre and Bertolt Brecht Brecht?s Epic theatre Bertolt Brecht The Caucasian Chalk Circle Similarities of Brecht?s Epic Theatre and ...read more.

Epic theatre uses a montage of techniques like fragmentation, contract and contradiction and interruptions and when required takes other techniques, like narration, puppetry, projection, comedy and audio visual, from other theatres for each individual production. Bertolt Brecht Brecht instructed his actors to keep a distance between themselves and the characters they portrayed. He is famous for his 1930 table itemising axes of distinction between dramatic and epic theatre climaxes in feelings and reason on theatrical emotion.[13] When staging his plays, Brecht instructed his actors to place an emphasis on stylised external signs and gestures to show the social relationships between characters rather than feelings. ?We are not supposed to watch Brecht with the idea of identifying ourselves with the characters?.[14] Brecht?s views holds that the audience is a collection of individuals, capable of thinking and of reasoning, of making judgments even in the theatre. He further asserts that the empathetic identification of spectators with a hero concentrates their collective emotion in a single direction, ensnaring them in a somatic, uncritical experience; [15] his theatre was intended to allow the spectators to rationally conclude the outcome though personal experience. Brecht wanted to make the spectator into an actor who would complete the unfinished play, but in real life?[16] as Brecht put it in a posthumously published note, ?If a feeling is to be an effective one, it must be acquired not merely impulsively but through the understanding?[17] The Caucasian Chalk Circle Instinctive compassion is a major subject of Brecht?s ?The Caucasian Chalk Circle?(the CCC). This play concerns a young servant girl, Grushia, who saves the deserted infant child of the Prince during a revolution. The revolution is motivated by greed and is waged primarily for profit through corruption; the politicians prosper and the common people suffer.[18] Brecht departed significantly from his normal mode of play writing in order to accommodate the tastes of an American audience.[19] These concessions to American viewers make the CCC unique as is the only one of Brechts plays that comes ...read more.

These scenes, if the play budget and infrastructure allowed would benefit from the stage set being assembled below the stage and when required to rise to the main stage, as illustrated in Figure 1. Figure 1: Mawari-butai stage ________________ Conclusion It is ambitious to believe Kabuki techniques, which have been around for hundreds of years, could bring new life to Bertolt Brecht?s ?The Caucasian Chalk Circle?. It may be seen from the above information that Kabuki is quite a theatrical art form which has historically entertained generations of Japanese. Brecht likes to make his audience think and compare the play to their experiences. By using subtle subconscious clues in the props and set will take away a portion of the thinking required by the audience, and therefore allow them to enjoy the detail in the tale more. The suggestions made in this research are not an attempt to change Brecht?s style entirely, but to add theatrical techniques from Kabuki theatre to illustrate both comically and unrealistically the scene in a way which the current generation of theatre goers can appreciate. Westerners enjoy the colour and spectacle of Kabuki theatre and the Kabuki influence in The Caucasian Chalk Circle can bring a dimension to the play which can be enjoyed by diverse groups of people. By introducing various types of Kabuki acting techniques, actor?s expressions, actors aesthetics, stage and effects to the CCC the audience will reduce a large portion of Brecht?s traditional view of ?Allow the audience to think? enabling the audience to be entertained while still be able to enjoy the tale. The Caucasian Chalk Circle is one example of Bertolt Brecht?s plays which has already been modified to suit the audience of the time. It is therefore not unreasonable that further modifications to suit the modern audience would benefit the numbers of spectators coming to see the production. It remains an unanswered question if the general population would share these views, however a future production of Bertolt Brecht?s ?The Caucasian Chalk Circle? should resolve the acceptance of the different cultural techniques used in traditional theatre. ...read more.