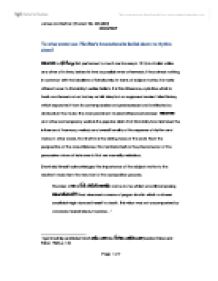 To what extent can The Rite's innovations be boiled down to rhythm alone?

To what extent can The Rite's innovations be boiled down to rhythm alone? The Rite of Spring, first performed to much controversy in 1913, is a ballet unlike any other of its time, before its time or possibly even afterwards. It has almost nothing in common with the idealisms of Tchaikovsky. In terms of subject matter, it is vastly different even to Stravinsky's earlier ballets. It is this difference, a plotline which is harsh and based not on fantasy or folk tales, but on supposed ancient tribal history, which separates it from its contemporaries and predecessors and is reflected so obviously in the music. The most prominent musical difference between The Rite and other contemporary works is the popular claim that Stravinsky has minimized the influence of harmony, melody and overall tonality at the expense of rhythm and meter; in other words, that rhythm is the driving force of the work. From the perspective of the casual listener, this manifests itself as the phenomenon of the percussive nature of instruments that are normally melodious. Stravinsky himself acknowledged the importance of the subject matter to the resultant music from the very start of the composition process. The idea of Le Sacre de printemps came to me while I was still composing The Firebird. I had dreamed a scene of pagan ritual in which a chosen sacrificial virgin danced herself to death. ...read more.

He outlines several instances whereby previous motifs provide a context for later motifs, both rhythmically and harmonically. The most prominent example of this is at the opening of 'Augurs of Spring', with the famous irregularly accented quaver chords. Whilst they appear to come out of nowhere, if we turn back a page to fig. 12 + 4, we see a semiquaver ostinato on pizzicato violins which outlines not only the pulse and metre of the proceeding passage but also the notes of the repeated quaver chords (Db Bb Eb Bb), in a broken chord-like pattern. This creates not just a relation between the two, but makes the former act as a prerequisite to the latter. The pattern of Db Bb Eb Bb is re-established throughout the movement, with the quaver chord ostinato intersecting passages featuring broken chords layered underneath chromatic scales and a recurring Ab - F ostinato on the Cor Anglais. This culminates in the tune of the 'old woman' at fig. 19 which makes use of the quaver chord ostinato's pulsating pattern of accents but fully embraces the key signature (unlike the quaver chord ostinato); a further example of Stravinsky's rhythmic preparation of motives which, in Hill's words, are 'the way that he engineers a context in which they are heard correctly and hence to the maximum effect'. Hill states furthermore that the rhythms are 'not static, but because of their changing context are in a constant state of evolution.' ...read more.

B�la Bart�k points out that The Rite's melodies often consist of short motives which are repeated in ostinato form, and that this practice is typical of a certain form of Russian Music.9 After analysing the above sources (among others) and the work itself, identifying more motives of folk origin, Taruskin concludes his essay by arguing that Stravinsky's purpose in using folk (or folk-like) melodies in The Rite was to liberate himself from mainstream art music.10 Any piece of music is of course composed of many factors. In the case of The Rite, it is easy to see that rhythm plays a larger part than normal. As other researchers have established, to claim that other factors such as harmony and melody are unimportant is short sighted. One viewpoint, taken by Eric Walter White, is that the harmonic, tonal, metric and rhythmic aspects of the work are competing with each other, creating 'tremendous internal tension'.11 Nonetheless, it would be pertinent to say that rhythm is the driving force, the part that holds together the structure of the work. Few works have caused as much controversy and heated debate as The Rite; it was certainly revolutionary for its time. It continues to captivate audiences, in a way that is different to other 20th Century styles of art music, and it is the dramatic, instantly noticeable shift in importance of each musical factor that truly makes it unique. ...read more.